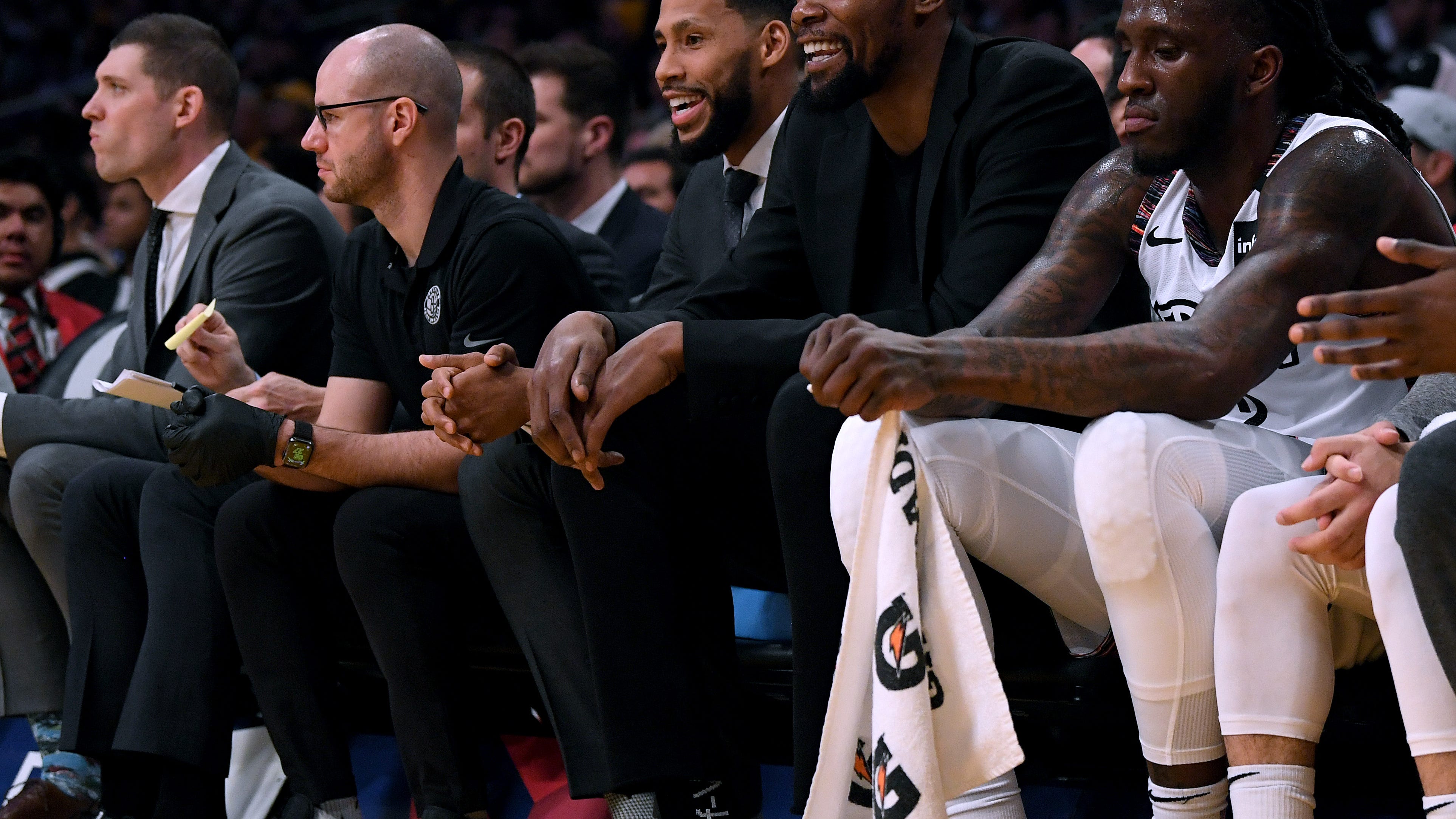 Nets Say Players Who Had COVID-19 Are Symptom-Free

At some point in the future, whenever this coronavirus pandemic runs its course, making it safe for people to once again commingle, the NBA will resume its entertainment business.

Since I’m working under the assumption that this Brooklyn season was already a sunk cost, the Nets will basically have a two-year window from there to execute their master plan. Kevin Durant and Kyrie Irving will by then be medically cleared from their respective Achilles and shoulder surgeries, but each superstar has an opt-out of his contract following the 2021-22 season.

With that significantly condensed timeline, Brooklyn will be one of the league’s most intriguing teams whenever the offseason wheeling and dealing commences.

The Nets have been the subject of much media speculation lately.  Will they go after a so-called “third star”? If so, who must be sacrificed in a trade?
USA TODAY Images

The name to watch is Spencer Dinwiddie.

The guard, whom Nets general manager Sean Marks plucked from the street in December 2016 before developing into one of Brooklyn’s core players, will be entering the final season on his contract before he, too, can opt out. Dinwiddie’s $11.4 million 2020-21 salary, though, makes him a bargain to potential value shoppers looking to retool. Package Dinwiddie, who will soon turn 27, along with other young players and/or future draft pick assets and the Nets would have enough to acquire a huge (in literal size and quality) missing piece to their puzzle.

I know some will question why I nominated Dinwiddie instead of, say, Caris LeVert, a fellow ball-dominant guard who has a scarier injury history. Since Irving also carries an injury risk, wouldn’t the Nets prefer to keep the more durable and secure ballhandler?

To me, LeVert has the higher ceiling. While Dinwiddie’s straight-line drive is his one elite NBA skill, LeVert has shown he can excel at all three levels (though his 43% two-point shooting this season is by far his career low).  Overall, LeVert (41.4%/38.1%/72%) still outperformed Dinwiddie (41.5%/30.8%/77.8%) in shooting efficiency. Note the huge 3-point differential and then consider how important floor spacing will be next season when Irving and Durant are on the court.

Defensively, they are kind of a wash. Dinwiddie is superior, though not great, at navigating screens. LeVert is much more active, leading the Nets in deflections per game and ranking second in steals behind Irving, who played just 20 games.

Unfortunately, though they are both considered “big guards,” neither is physical enough to allow the Nets to succeed when playing in a small ball lineup that also includes Irving. The Raptors can get away with playing 6-footers Kyle Lowry and Fred VanVleet together because they’re both bulldogs. They don’t die on screens or crumble to pieces if they get switched onto bigs. The Nets would get punished in the postseason.

That diminutive two-way G League callup Chris Chiozza entered the scene in the last five games and made his mark by averaging 10 points while knocking down 10-of-19 3-pointers didn’t help Dinwiddie’s case.  Chiozza’s passing was an eye-opener, especially when you contrasted his on-target bullets to Dinwiddie’s often lazy, inaccurate feeds.  Starting with the Boston miracle comeback on March 3, Chiozza’s 19 minutes per game usually came at Dinwiddie’s expense. Dinwiddie allegedly wasn’t pleased.

As a Nets fan, I absolutely appreciated Dinwiddie’s All-Star level of performance during Irving’s first 26-game layoff due to his shoulder impingement. However, Dinwiddie’s act can be tiresome. Professional athletes are supremely confident by nature, but Dinwiddie often has taken that to extremes. One made 3-pointer requires a heat check on the next possession. He’s the most vocal complainer to referees when he doesn’t get favorable whistles from running into defensive walls off drives. Sometimes he’s right, but former Nets coach Kenny Atkinson once said that he was willing to act on everyone’s suggestion when it came to challenging calls. Everyone’s, that is, but Dinwiddie’s.

And though Dinwiddie’s final shot as a Net might turn out to have been his game-winning pull-up with 28 seconds remaining to beat the Lakers on March 10, let the record show he hasn’t been as clutch as he promotes. Per NBA.com, he ranked 35th among 49 guards in true shooting percentage during games when the margin was within five points in the last five minutes, including 2-of-24 on 3-point attempts.  His decisions that blew opportunities to win games in crunch time exceeded those that yielded the desired results.

As for the potential irony that it was Dinwiddie who supposedly laid the groundwork to entice Irving to Brooklyn when the two took business classes at Harvard in 2018, we don’t know the real relationship. The same with LeVert, who has been tied to KD in prior reports.

The sense I’ve gotten is that the Nets’ two stars are driving forces behind what will transpire on the court going forward. They want Marks to make short-term upgrades. It’s business.

I’ve been trying to come up with a trade that makes sense for all parties, one that would allow the Nets to plug the third-star hole within their narrow timeline while also helping to transition their trade partner to a new normal.

The Pacers haven’t been getting the bang for their bucks — they haven’t escaped the first round of the playoffs since 2014. They are locked in at about a $121.5 million payroll for next season. The initial salary cap ($115 million) and luxury tax ($139 million) projection will surely drop due to the massive revenue losses from the pandemic.  Time to break up the Pacers. So here’s what I came up with: