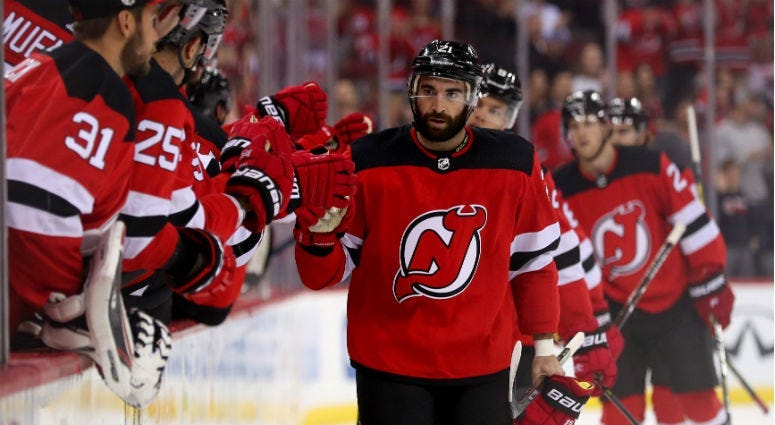 I can’t remember the last time the Devils scored a five-on-five goal that didn’t originate from their top line (I looked it up--it was Jean-Sebastien Dea in the third period against Dallas on October 16—four games ago).

Nico Hischier (two goals), Kyle Palmieri (three assists) and Taylor Hall (two assists) may have been beasts again during Thursday’s affair at Prudential Center against Stanley Cup contender Nashville, but the rest of the forward group produced nada as the Devils extended their winless streak to three games in a 4-3 overtime loss.

Devils coach John Hynes, who ran a couple of harsh practices earlier in the week following what he deemed to be substandard efforts in his club’s previous two contests, thought the team was getting closer to the one that raced off to a 4-0 start.

“I think we took a step in the right direction,” Hynes said in Thursday’s post-game press conference.  “We had more of a complete team effort, which is what we talked about.  We played more to our identity and we still need a little bit more from some guys, a little bit more to be able to find a way to win the game.  I think if we continue to play better and build on it, we will.”

I took that to be more of a prayer than a guarantee.

Secondary scoring was an issue last season, though the Devils overcame it through the sheer brilliance of Hart Trophy winner Hall and clutch goaltending from Keith Kinkaid down the stretch to qualify for the playoffs for the first time since 2012.

Nothing has changed—the top line has generated about half of the team’s goals this season.  The end results, however, may vary.

It’s too early to panic, but I’m worried that management’s plan for growth from some of the young players on the bottom three lines just won’t materialize.

There’s been no excuse.  The schedule, with only one road game of the seven to date and loads of time off, has been very favorable.  Sure, Travis Zajac and Jesper Bratt dealt with injuries, but Zajac missed just one full game and Bratt, 19, should have been far from irreplaceable.

Hynes, for all his prodding, might never get what he needs from certain guys in his bottom nine because they’re just not good enough.

For a second consecutive season, Pavel Zacha, the sixth overall selection in the 2015 NHL Entry Draft, was handed the second line center role.  Even if you commend him for his improved defensive play, it doesn’t outweigh the fact that he is now pointless in seven games.  Zacha has skills, but it may have been asking too much to count on him for even 40 points, a low total for that responsibility.

In Hynes’ line blender, Dea was placed on Zacha’s right on Thursday.  Though he scored in three straight games earlier in the season, Dea has never been known as a point-getter since turning pro in 2014.  A career minor leaguer, he has no business playing top-six minutes.  He isn’t even Brian Gibbons, the former Devil who was a bit of an unsung hero during the first half of last season.  The speedy Gibbons was strictly a fourth-liner anyway.

The Devils are getting nearly nothing from the likes of Marcus Johansson, John Quenneville, Drew Stafford, Stefan Noesen and Blake Coleman, who had a glorious chance to give New Jersey some cushion in the third period but was stoned by Nashville goalie Juuse Saros on a shorthanded breakaway.  On the ensuing rush, the Predators came down and scored the tying goal with 6:20 remaining.

“I just tried to fake, gave him a drop, and tried to go upstairs on the far side,” Coleman said of his move across the goal mouth to his backhand.  “(Saros) hung with it and made a good save.  In a one-goal game, I’ve got to find a way to put that home.  Obviously, it came back to cost us.”

Coleman and Noesen, the two Texans who signed extensions for fair raises as restricted free agents in the offseason, have a combined three goals and one assist.  Noesen played all of 9:40 on Thursday.

The Devils do have options.  AHL Binghamton houses some players who were on the cusp of making the big club out of training camp, but the organization went in other directions, like claiming Dea off waivers and signing the rapidly aging Stafford after his PTO.  Quenneville was the only young player the Devils added to their 23-man roster at the start of this season, and he has rewarded Hynes’ faith by also going pointless in his five games played.  When Zajac was injured, the club called up Kevin Rooney, a 25-year old penalty-killing specialist who looked far less impressive in the preseason than Joey Anderson, Nick Lappin and Brett Seney, all of whom were sent to Binghamton and are producing.

Following Saturday’s home matinee versus Florida, the Devils hit the road for seven straight games, including stops in Tampa Bay, Pittsburgh, Toronto and Winnipeg--teams that dwarf New Jersey in the talent department.

In such a competitive division, the Devils’ season can slip away as early as November if the secondary scoring issue isn’t addressed.  Hynes and general manager Ray Shero can only be patient for so long before those that aren’t performing their jobs need to be sent to lower-profile jobs.