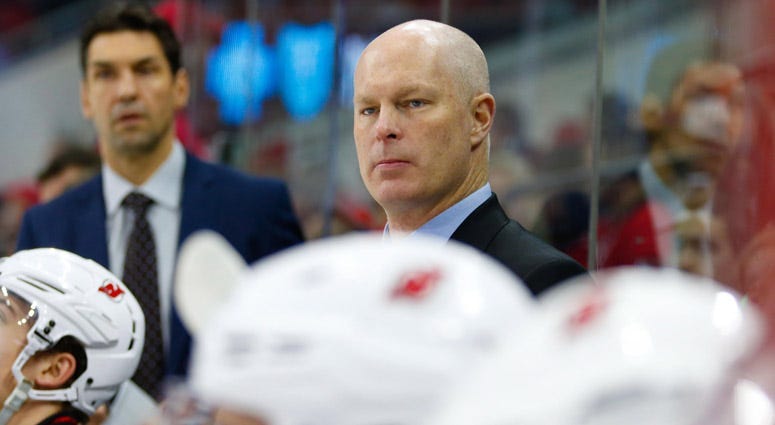 So let’s take a moment here to commend Hynes for his role in the extraordinary happenings in New Jersey this season.

The Devils are on the brink of earning their first playoff berth in six years after a 5-2 rout over the rival Rangers at the raucous Prudential Center on Tuesday. New Jersey’s magic number is two points with two games remaining (home vs. Toronto on Thursday, at Washington on Saturday). Any combination of two points earned by the Devils and/or lost by the Panthers in their final three games will do the trick.

If you think an East wild card is no big accomplishment, remember where the Devils were just six months ago. No one knew if they could even rise above their 70-point, cellar-dwelling performance of 2016-17.

Two forward lines were missing their centers on Opening Night, with Travis Zajac and Brian Boyle starting the season on the injured list. The team’s marquee offseason acquisition -- wing Marcus Johansson -- would go on to play just 29 games after suffering two concussions. And the conventional wisdom was that Cory Schneider needed -- I repeat, needed -- to have a bounce-back season in net in order for the Devils to be competitive.

Instead, the Devils’ depth has supplemented a Hart Trophy-worthy campaign by left wing Taylor Hall while Keith Kinkaid took over down the stretch from an injured/ineffective Schneider between the pipes to make the team complete.

Sure, Nico Hischier was a huge addition as the No. 1 overall selection in the 2017 draft, but most experts predicted that the 18-year-old would have nowhere near the impact of recent top picks. He wasn’t even a lock to make the team, until he wowed Hynes with his 200-foot game in the preseason. He hasn’t let up since.

While Hall and Hischier make the headlines, Hynes’ success in cajoling every ounce of talent out of the team’s unheralded young players and castoffs should not be overlooked.  Here are three ways in which the third-year coach had a direct hand in the Devils’ improvement:

The 2016-17 Devils were slow and soft. This season, the league has taken notice of their speed and compete level.

It started in training camp, where Hynes made clear that last season’s effort -- or lack thereof -- was unacceptable. As for the new speed emphasis, I go back to what Hall was asked at the team’s media day regarding who he hoped to play on a line with. He said he didn’t care “as long as they can play fast.”

Enter Hischier and Jesper Bratt, a pair of teenagers who made sure Hall had his jets going from the start. When Bratt hit the rookie wall by February, Kyle Palmieri stepped up to the top line. Apart from a couple of periods in Montreal on Sunday, when Hynes had a momentary brain cramp and swapped Palmieri with the lumbering Patrick Maroon, the Hall/Hischier/Palmieri trio has been devouring the competition, combining for 95 points in the last 32 games. Hall is on another one of his ridiculous streaks, with 17 points (eight goals, nine assists) in his last nine games.

The secondary lines were also constructed by accentuating speed and tenacity. Guys such as Blake Coleman, Stefan Noesen, Brian Gibbons and Miles Wood are what Hynes calls “identity players.” Their efforts in the Devils’ own zone helped alleviate the strain on a below-average defense corps.

Once the identity was established, Hynes made sure his players kept to it. Those who strayed were not long for the lineup.

Even Hall got the message.

“He holds me accountable with my play every night,” Hall said after a four-point (two goals, two assists) outing against the Rangers. “He’s helped me become a much better two-way player. I find that I don’t spend as much time in my own D-zone -- and that’s a credit to my centerman (Hischier) and (Palmieri) as well. (Hynes) holds everyone accountable in how we have to play on the other side of the puck. He might give me some freedom offensively, but I’ve got to play the right way in the D-zone, or I’m not going to play.”

Nowhere was accountability more important than in the Devils’ net, which brings me to ...

It had to be excruciating for Hynes to basically tell his long-term starter, Schneider, that he would finish the season as a spectator barring a Kinkaid injury or severe downturn in play. Since Schneider returned from a groin injury March 1, Kinkaid has started 13 of the last 17 games, including the last seven. While Schneider went 0-4 in that stretch, Kinkaid is on a 10-2-1 roll.

I would argue Hynes was a little late to make the call, but many experts refused to believe that Kinkaid needed to take over full-time until Schneider's bitter end, a 6-2 debacle in San Jose on March 20. They still were insisting that the Devils had to get Schneider right.

This area tends to eat coaches for breakfast on talk radio and social media, so sometimes we don’t know what to do when the good ones arrive in town.

Though Hynes, for his part, routinely deflects all the credit onto his players, there’s no denying that his button-pushing has been on the mark for most of the season.

If it results in the Devils finally securing a trip to the postseason, Hynes could live without the Adams Award.