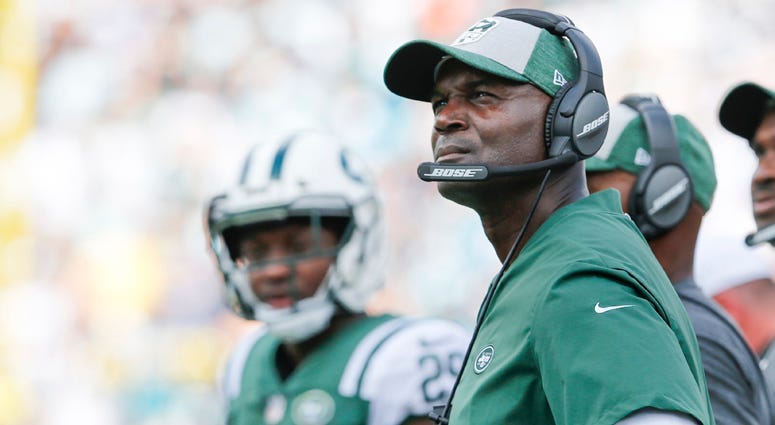 Jets coach Todd Bowles tried so hard to reinvent his character on Sunday.

He called a fake punt and went for another fourth-and-short conversion that wasn’t out of desperation.  The game plan allowed rookie quarterback Sam Darnold to sling it around the field most of the game.  Even in his postgame comments following Gang Green’s 44-38 overtime loss to Green Bay at Met Life Stadium, Bowles showed emotions that had been absent for virtually his entire four-year tenure by lashing out at the officiating.

In the end, though, it was the Same Old Bowles, which I found fitting given the unintended consequence of this result besides the obvious benefits from tanking (the Jets dropped a draft slot to fourth behind the 49ers due to a change in the strength of schedule tiebreaker).

Sunday’s collapse guaranteed that there will be no last-minute resuscitation of Bowles by Jets ownership, similar to how Rex Ryan allegedly saved his job for one more season in 2013 by winning three of his final four games.

Imagine for a minute that the Jets managed to make a play—just one play among the many opportunities—to deny Packers quarterback Aaron Rodgers the comeback from two scores down in the last ten minutes on Sunday. Then the chatter would be about how the Jets have won two-of-three while giving division-leading Houston all it could handle in the one defeat.

In many areas, the Jets have indeed “showed progress” late this season, which was reportedly the subjective metric, established by Jets owner Christopher Johnson in advance of the campaign, that Bowles had to meet to secure his future employment. Although the 4-11 Jets will probably fail to match the meager five-win totals from their last two seasons given that the Patriots will be motivated in next week’s season finale in New England, Bowles could point to the clear improvement in Darnold and the offense since the young QB returned from his foot injury three weeks ago. He can also claim that the special teams, for the first time in many years, has been a major net positive.

Bowles’ defense, however, is another story. His overreliance on such a lousy unit again precipitated his undoing on Sunday—and beyond.

After Jets safety Rontez Miles took the snap from the upback position in punt formation and pounded out four yards for a first down to the Jets 35-yard line, the Jets suddenly went conservative.  I could see Bowles thinking; “My defense will step up to win this one.”

Never mind that a 35-30 deficit with four minutes remaining is child’s play to Rodgers, who is one of the most clutch QBs in NFL history.

The subsequent play-calling from Jets offensive coordinator Jeremy Bates came straight from the book of “Playing Not To Lose,” in which a whole chapter is dedicated to Bowles.

After a Green Bay face-mask penalty during a run for a one-yard loss by Jets running back Eli McGuire placed the ball at midfield, Bates adhered to the Bowles’ Principles of managing a game with a lead.

According to Bowles, the primary mission in these situations is not to continue moving the chains, but to drain the opponent of time outs.

Oh, but the Jets then faced a third-and-19 thanks to a Brian Winters holding penalty on an Andre Roberts reverse and two McGuire runs into the line that netted one yard.

The Jets did call a pass on third down, but it was a screen that was all too easy to read for Green Bay’s defense. Darnold grounded the ball, which also stopped the clock.

Of course, Rodgers then drove the Packers 83 yards for the go-ahead touchdown. The game might have been over then if not for a 51-yard return by Roberts on the ensuing kickoff. The short field set the Jets up for the game-tying Jason Myers field goal. Green Bay won the overtime toss and went 75 yards, abetted by three Jets defensive penalties, to win the game.

Bowles may have been right to fume over certain flags in big spots, but another common theme of his tenure is the appalling lack of discipline exhibited by his players, especially when games are on the line.  The Jets committed 16 penalties on Sunday, the most by any team in the league this season, for a whopping 172 yards, a franchise record. A mind-boggling eight penalties that cost 109 yards occurred in the final 11:09 of regulation and overtime, per Andy Vasquez of the Record.

As Bowles acknowledged, not all of the flags were bad calls. One of the costlier violations was when Jets defensive lineman Leonard Williams threw a punch at Packers tackle Bryan Bulaga and was ejected late in the second quarter. Williams may not produce like a sixth-overall draft pick, but he is an important player whose absence was felt later on.

That was one of four 15-yard penalties for unsportsmanlike conduct or personal fouls called on the Jets on Sunday. There were also four defensive pass interferences, two defensive holds/illegal use of hands, two offensive holds, an illegal block, a false start, a delay of game (on a PAT!), and a 12-men-on-the-field foul.

No matter how much Bowles says he has emphasized to his team the importance of reducing these mistakes, nothing seemed to work.

And no matter how hard he tried in the end, Bowles will be remembered as the leopard who could never change his spots.