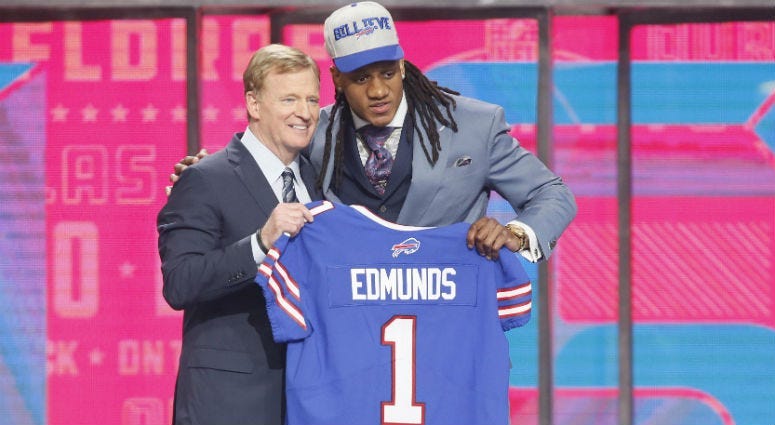 The Jets and Giants certainly made bold and large statements with their initial selections in the NFL Draft.

Sam Darnold was the best quarterback in the draft and the Jets got their man. Saquon Barkley was the best player in the selection meeting and he will be wearing a Giants uniform.

The Jets have needed a prime-time quarterback for decades, while the Giants have not had any kind of running game for years. Both teams appear to have upgraded perennial weaknesses.

However, the draft was not conducted in a vacuum, and the Jets’ AFC East rivals all made moves to improve, and so did the Giants’ long-time enemies in the NFC East.

Here’s a look at the best players selected by the Jets’ and Giants’ division rivals.

LB Tremaine Edmunds – We have nothing against first-round quarterback Josh Allen, but he is far from a proven commodity. He has a lot to learn and must prove himself and his overall consistency.

However, Edmunds should be a star by the midpoint of his rookie season. The former Virginia Tech Hokie is an old-school linebacker in that he loves to hit, and he is a new-school player in that he has excellent speed and instincts. Edmunds should be a key playmaker on the Bills defense, and opposing offenses will have to gameplan for him once he gains a bit of experience at the pro level.

TE Mike Gesicki – Head coach Adam Gase needs a tight end who can make plays and take the pressure off of his quarterback, and he is banking on Gesicki to get the job done.

Gesicki is 6-6 and 247 pounds, and he runs a 4.54 40. Gesicki is a remarkable athlete for the position. He gets a great release off the line of scrimmage and he can also go deep. Gesicki has wonderful ball skills and if he can get his hands on the ball, he can catch it.

In short, he is the difference maker at the tight end position the Dolphins have been looking to acquire for several years.

RB Sony Michel – Taken with New England’s second first-round pick, Michel is a finished product. He can run inside, outside, take on a key role in pass protection and also catch the ball.

There’s no way Bill Belichick will draft a running back in the first round unless he has confidence that he can do at least a competent job in all of those areas. Michel is the real deal, and there is nothing phony about his game. If he is given a choice of taking on a tackler or running to the sidelines and out of bounds, he will choose physical contact.

Michel excels at stringing moves together and when he can do that, he has an excellent chance of getting to the second level. He’s also a hard-nosed blocker who enjoys leveling an opponent.

OG Connor Williams – While the Cowboys made a rather uninspired choice in LB Leighton Vander Esch with their first-round selection, they were sharp and logical with their selection of Williams in the second round.

The Cowboys have a weakness at guard, and in drafting this former Texas Longhorn, the Cowboys have gone a long way to shoring up that weakness. If Williams plays to his strength – his excellent technical skill that allows him to deliver clean and effective blocks – nobody will be happier than running back Ezekiel Elliott.

>>MORE: Dave Gettleman On WFAN: Giants Had 'Very Reasonable Offer' For No. 2 Pick

Williams does not have the overpowering strength that some of the bulkier offensive linemen have, but he plays with excellent integrity and will work through the whistle to defeat his opponent on every play.

Edge rusher Josh Sweat – We don’t understand the selection of South Dakota State tight end Dallas Goedert because he appears to need a lot of development before he will be able to contribute in the NFL.

However, the selection of Sweat could pay off in the second half of the season. He is going to have a lot to learn himself, but he grew quite a bit playing at Florida State and should be able to make a decent contribution as a pass rusher.

The Eagles have the kind of talent that will allow them to bring him along slowly, and he has a chance to be a key cog in November and December.

DT Da’Ron Payne – The Redskins did not show much power along the line of scrimmage last season, and the selection of Payne will help them upgrade this area.

Payne is a fantastic athlete for the position as he checks in at 6-3 and 311 pounds while running a 4.95 40. He will do a great job against the run as soon as he takes the field, and he has weapons in the pass-rush game as well.

He will start from Day One, and he has the ability to take the heart out of the opposition when he makes a couple of key stops in a row.