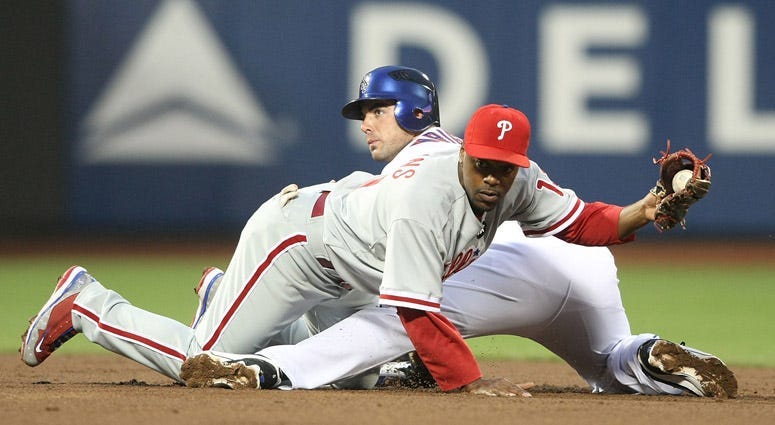 I thought this would be a good time to start sharing some of my favorite stories. Here is one involving Derek Jeter, David Wright and Jimmy Rollins.

From 2006-08, the Mets and Phillies rivalry in the National League East was hot. The teams finished 1-2 in the division all three years, with the Mets winning in 2006 and the Phillies chasing down the Mets to win in 2007 and ’08. The on-field competition was fierce. And so was the trash talk.

“Back then it was us (Phillies) and the Mets, a battle of words — media and fans getting all into it,” Rollins told me in the spring of 2014.

“That was at the time when Jimmy and I were kind of popping off back and forth to each other,” Wright told me that same year.
Nick Laham/Getty Images

In March 2009, Rollins and Wright were in the same uniform as part of Team USA at the World Baseball Classic. Only one locker separated the two superstars — Jeter’s. And on the first day, as players filled the clubhouse, the tension was thick.

“Jeter walks in and goes over to his chair, and David and I are sitting just (real close) to each other, literally not saying a word,” Rollins continued. “Jeter walked over to his chair and said, ‘Oh, I’m not getting in the middle of this,’ and walks out, and everybody starts laughing.”

“Derek did a nice job kind of playing mediator and making a joke out of the whole thing,” Wright said. “Since then (Jimmy and I) kind of buried the hatchet and actually are pretty close now and enjoy that kind of back and forth.”

“Ever since then, me and David have been all right with each other,” Rollins said. “That’s DJ.”

And that’s how Derek Jeter brokered peace in the NL East.