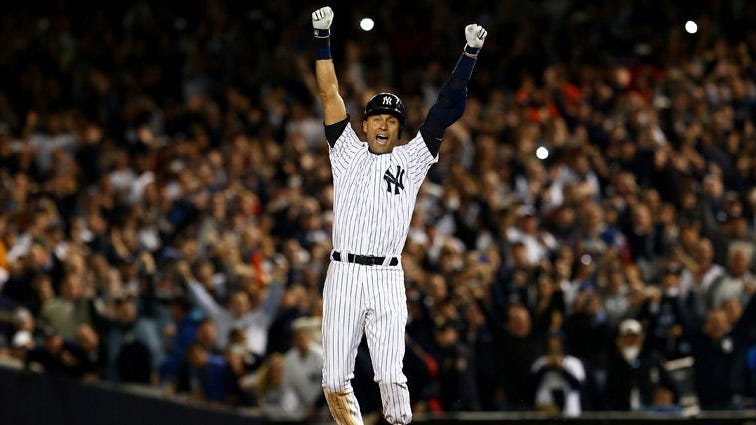 "The only place he’s going is to Cooperstown.”

That’s what Yankees scout Dick Groch said when the Yankees wondered if they could draft Derek Jeter with the sixth overall pick in the 1992 MLB Draft or if Jeter would spurn them for his scholarship offer to the University of Michigan.

Groch was speaking with some hyperbole, of course. But he was the first to say what the rest of us have known for a long time and will become official this week: Hearing Jeter’s name will not be a surprise when the Baseball Hall of Fame balloting is announced Tuesday.

Sometimes a great career goes sideways — for whatever reason — and the player doesn’t end up on the same plane we originally thought. But Jeter’s career sustained. And I’d say somewhere between winning his fifth championship ring in 2009 and smashing his 3,000th hit in 2011, Jeter’s place in Cooperstown was on reserve.
Al Bello/Getty Images

He was not the greatest talent of his generation, but his performances were free of suspicion. And if the Hall of Fame is about career accomplishments, Jeter and Joe Montana have probably had the best athletic careers of my lifetime, both championship filled and scandal free.

“To me, he’s the greatest Yankee there is,” Robin Ventura told me in 2012. “The time that he’s done it, the position that he’s played, the city that he’s played in and the team that he’s played for — you know, it’s different. It’s a different time, it’s a harder time than it is at any other point. Media, the internet, mobile phones, all that stuff going into it. There’s more pressure to it.”

There is no displacing Babe Ruth, Lou Gehrig, Joe DiMaggio, and Mickey Mantle on the Yankees' Mount Rushmore, with Yogi Berra holding off everyone else for the fifth spot. But Ventura’s point is clear — the environment Jeter played in was far different than one any of the other greats had to endure. Could you imagine Ruth or DiMaggio being tailed by TMZ?

“We can put on the uniform, and we can play in the Stadium, but we’re not the New York Yankees unless Derek Jeter is playing shortstop,” Mike Mussina told me in 2003. Jeter was on his way back from the shoulder injury he suffered six weeks earlier on Opening Night in Toronto.
Elsa/Getty Images

His identity on the team, which would name him team captain a few weeks later, was easy for everyone to see, even on a team that featured multiple All-Stars and Hall-of-Famers.

The power numbers he lacked would always dent his place in barroom arguments about the greatest players of his and other eras. But 3,465 career hits — that’s a number that doesn’t get enough respect. Only five players in major league history accumulated more, and two of them — Ty Cobb and Tris Speaker — were born in the 1800’s.

Jeter’s ability to get big hits or make big plays were almost taken for granted. Except by those who witnessed them.

“When you’re playing against him you want him to have as little to do with the outcome of the game,” Terry Francona told me in 2014. “He’s not going to be out of position, he’s going to make the extra play as we’ve all seen him do, especially as the game gets tighter he’s always in the right place, so you want him to have the least amount of say-so in the game as possible.”

And Francona had a front row seat in the visitor’s dugout at Yankee Stadium in 2004 when Jeter made his famous dive into the stands, emerging bloody and bruised and holding the ball.

“That was probably him in a nutshell,” Francona said. “He has a knack for being in the right place at the right time, and that’s not luck.”

“He’s as confident a player as I ever played with, in a good way—in the best kind of way,” Aaron Boone told me in 2014. “When I came over (in 2003) I knew he was a good player, but almost immediately I realized this guy is an unbelievable player. Whether you always get the hit or not, unequivocally I’d say ‘I want it hit to him and I want him up’ because I just knew he’d be as big as any moment.”
Jim McIsaac/Getty Images

Jeter’s ability to stay even and stay focused. His coaches always appreciated the work ethic and the leadership Jeter showed in trying to bring that level of play to his teammates every day.

“Robby would get 2 or 3 hits and come out and be really digging himself, and Jete’s favorite line is, ‘Stay humble, Robby.’” Bowa remembered.

“He says that to everybody, and I even say that now to kids, ‘Hey, stay humble,’” Bowa told me. “And they look at me, and I say, ‘If you want to know what that’s all about, Derek Jeter is where I first heard that.’”

No, he wasn’t the greatest player ever or of his time. At various times there were players on his own team that appeared more talented. But if you put the package together and add it up over a twenty year career, we all knew a long time ago that Groch was right. And Tuesday night, it will become official.