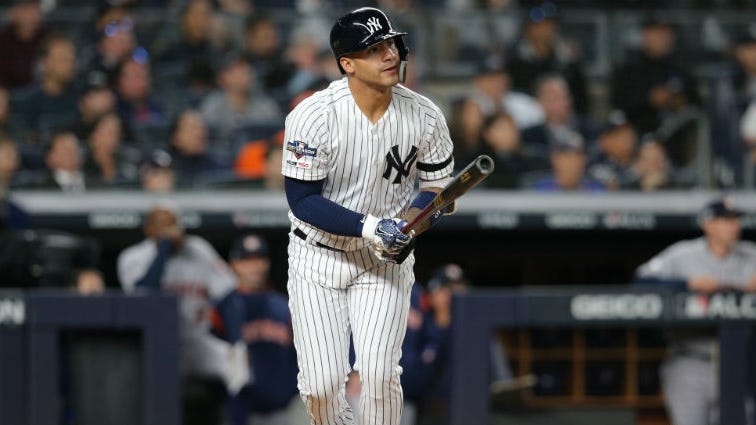 Following the rainout on Wednesday, Yankees manager Aaron Boone announced that Masahiro Tanaka will start Thursday and James Paxton will start Friday. Astros manager A.J. Hinch announced that Zack Greinke will start Game 4, followed by Justin Verlander in Game 5. All four of those pitchers will be on regular four days rest.

Here’s the lineup the Yankees put out there in Game 1 against Greinke:

Torres was dropped down to 5th in Game 3, with Gardner batting 3rd. Now that they are in a 2-1 hole in the series, there is some urgency that could force a change. With that in mind, here’s the lineup a current manager of another major league team suggested to me the Yankees should use in Game 4:

The reasons he gave for moving Torres ahead of Judge: “Bunch your best hitters, get some traffic for Judge.”

There is still space between Gregorius and Gardner, which seems less relevant because the Astros are not carrying any left-handed relievers. However, some of their right-handed relievers (including Ryan Pressly) have reverse splits — meaning they fare better vs. left-handed batters than righties.

Of course, the idea behind a deep lineup is that the bottom of the order can be dangerous too. And Sanchez has struggled this postseason. In this series he is now 1-for-13 with 6 strikeouts.

Boone didn’t sound like he was interested one bit in replacing Sanchez with backup Austin Romine. Boone pointed to Sanchez’s overall good defense (despite the wild pitch in Game 3) and that he is still a dangerous hitter who is “one pitch away or one at-bat away from getting locked in and changing the course of a game.”

Giancarlo Stanton is still an option off the bench for the Yankees as they wait to see if it’s worth losing him for the rest of the postseason with a quad strain that Boone admits probably would have put him on the injured list in the regular season. It limits their current options with a two-man bench. If Hicks is starting, then Cameron Maybin is your only bench player with his limited window being a pinch-running opportunity for Encarnacion or Sanchez.

The Yankees may yet decide to just make the call on Stanton and replace him on the roster. But they can buy some time right now, at least one more day.

Adam Ottavino has struggled to get out the right-handed batters at the top of the order. Boone says he maintains confidence in him.

This is the job Ottavino was brought here to do—get out tough right-handed batters. He is hurt by the fact that the Astros hitters make more contact than other teams, so the strikeout is not as big a weapon. Even when he got ahead of George Springer 1-2 in Game 3, Springer found a way to lay off pitches and work a walk.

The only way I could see working around Ottavino is stretching Chad Green, Tommy Kahnle, and Zack Britton to bigger portions of the lineup.  But those aren’t all favorable matchups and there is a risk of diminishing their effectiveness by pushing them too far.  It might come to that, but Boone doesn’t sound like he’s willing to go there just yet.

One theory I have heard about Ottavino facing Springer is that it is too many looks at the same reliever in a short period of time and that is advantage to the hitter.  I understand the theory, especially when so much is made out of a starter facing the same hitter too often in a game.
Brad Penner-USA TODAY Sports

The difference here is that most relievers are two-pitch pitchers and there isn’t much mystery to what they use to attack hitters whether you see them a lot or not.  Nelson Cruz and George Springer happen to be two great hitters who haven’t chased Ottavino’s slider like many hitters did in the regular season.  Getting out the same hitter requires proper execution and sequencing.  And if that occurs, the familiarity will be less of a factor.

The one that keeps popping into my head is Damaso Marte vs. Ryan Howard in the 2009 World Series. Marte retired Howard all four times he faced him in six games during that series. There wasn’t much mystery, just execution. And Marte won every time despite Howard getting repeated looks at him.

In Games 2 and 3 Yankees hitters were 1-for-9 with runners in scoring position. The one hit by the Yankees came in the sixth inning of Game 2. It was the infield hit by Brett Gardner off Jose Altuve’s glove. That’s the one that Carlos Correa recovered and threw out DJ LeMahieu trying to score.

And it’s not that the Yankees have failed to put the ball in play—in Games 2 and 3 the Yankees hitters struck out 19 times compared to 24 by the Astros.

The Yankees are putting their bat on the ball and striking out less than the Astros. They just aren’t putting as many balls into the seats. A few more home runs could make a world of difference.