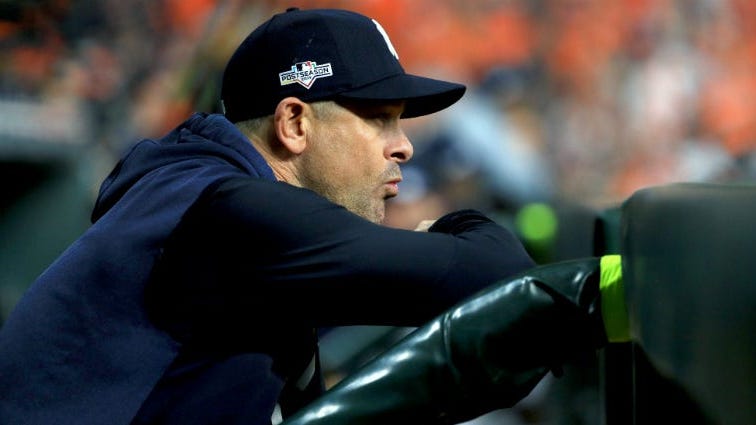 TAMPA, Fla. — The Yankees haven’t forgotten, but they are trying to move on. It’s just not going to be that easy.

It was very easy to hear Gary Sanchez’s frustration with the sign-stealing Astros and the walk-off home run Jose Altuve hit in Game 6 of the American League Championship Series last year.

“I mean, he stayed back pretty well on that pitch,” Sanchez said through translator Marlon Abreu, when asked if he thought Altuve knew that Aroldis Chapman was about to throw a slider. Altuve’s home run sent the Astros to the World Series.

“They asked him, ‘What were you looking for in that at-bat?’” Sanchez continued. “And he said he was looking for an off-speed. So, I don’t know. It’s a good question.”
Kim Klement/USA TODAY Images

Sanchez said people have sent him all the videos that show Altuve warning his teammates not to rip off his jersey, purportedly for fear of exposing a buzzer on his chest.

“I don’t know,” Sanchez laughed. “But I can tell you that if I hit a homer and I get my team to the World Series, they can rip off my pants as well. They can rip everything off.”

The Yankees were well aware of Houston’s reputation and did everything they felt possible to disguise the signs from the catcher to the pitcher the entire series.

“We had a really good system in place to protect our signs,” Sanchez said. “I really believe that, and that’s what I thought at the moment. And then this investigation happens and all the results come out, you’re like, ‘Wow, what do we have to do?’”

Of course, the investigation dealt with the 2017 Astros, but the 2019 team was not free from suspicion as noted by the Altuve videos and pictures that circulated afterward.

If the Astros players want to apologize in any way, so be it. Luis Severino is good without one.

“They don’t have to apologize to me,” Severino said.  “For me, it’s already in the past. I have to focus on 2020, because we can get mad, we can get anything, but we can’t change the past. It’s already done.”

Severino did admit he was angry when he first heard about the scandal.

“I really was (mad),” he said. “I don’t remember how many times I would look in the mirror and do mechanics and start to see if I was really tipping or what was the problem. So at the beginning I was (angry), but right now I’m not anymore.”

Severino struggled in two regular-season starts against the Astros in 2017, giving up 15 hits and nine runs in 7⅔ innings. The Astros were in his head.

Aaron Boone wasn’t here in 2017. Might Joe Girardi still be managing the Yankees if the Yankees had won that series? Even if you ignore that part of it, Boone guided the Yankees to 100 wins in each of his first two seasons only to be eliminated each year by teams who had to fire their managers because of this cheating scandal and the ensuing investigations.

Boone counted Houston’s AJ Hinch and Boston’s Alex Cora as longtime friends, and he worked closely with Carlos Beltran (a special adviser to general manager Brian Cashman last season). Boone had spoken many times of the respect he had for all three men.

“Um,” Boone said, followed by a six seconds of silence.  “Look, those are still guys I consider friends. I’ve struggled like I’m sure a lot of people with kind of making sense of it all and trying to kind of wrestle with my emotions and, in a way, get some clarity. I don’t think you ever totally get there, and that’s OK.

“I think as human beings we all fall down and we all fall short,” Boone continued. “None of us are perfect.  Hopefully I treat people with a grace that would reflect that, but it’s been a little bit of a struggle for me in how I make sense of it.”

Boone is the one who has to put this behind him quicker than the players. That’s because his job is to lead the Yankees in the now, not in the past. The players might feel conflicted, but letting the emotion of it get to them now is not something that is beneficial to them. Publicly they are saying the right things about moving on, but it is not hard to tell they aren’t letting go of it that easily.

Boone is the one who has to put the conflict behind and move his team forward. He has to have foresight, and it has to be 2020.