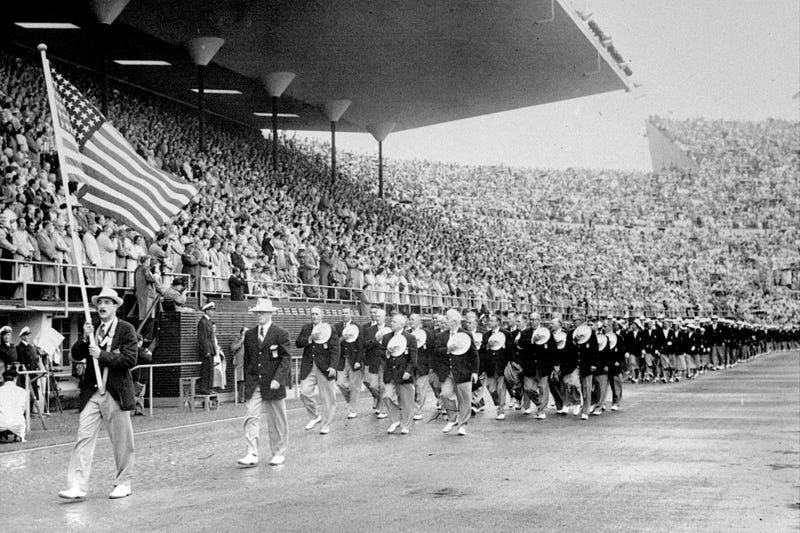 Photo credit FILE - In this July 21, 1952, file photo, members of the United States Olympic team holding their hats over their hearts as they pay tribute to Finland's President Juho K. Passikivi, march into Olympic Stadium during the opening ceremonies of the Summer Olympic games in Helsinki, Finland. (United Press via AP, File)
By The Associated Press

The United States and the Soviet Union formed an uneasy pact to help turn back Nazi Germany during World War II. Less than a decade later, most global events were seen as part of the Cold War between the two super powers, including the Olympics.

The Summer Olympics in Helsinki, Finland set a record for countries (69) and participants (nearly 5,000), numbers boosted by the USSR's first appearance in the games as a communist nation. The Soviets felt winning medals — and blocking the Americans in the process — could boost their profile on the world stage while espousing the superiority of their way of life.

In 1951, the USSR produced the equivalent of $8.2 billion in today's money on sports equipment. It was part of an effort designed to, not just close the gap on the Americans, but surpass them.

They nearly did. The U.S. topped the medal table with 76 thanks to dominance in track, followed closely by the Soviets’ 71 thanks to a serious haul on the wrestling mat. The competition began an athletic tug-of-war at the world's largest sporting event that continues seven decades later. Either the Americans or the Russians have finished with the most medals at each of the last 17 Summer Olympics, the U.S. doing it nine times and their counterparts eight.

The USSR was still a mystery to much of the world in 1952. Details of the country's athletic progress were sketchy in the West. Reports of world records and eye-popping performances all came from the highly-filtered government-controlled media. The decision for all Soviet bloc nations to live in an Olympic village separate from Western nations only deepened the mystery.

Then the USSR surprisingly invited Westerners — including Americans — to enter the communist Olympic Village. The Soviets even hosted a swanky dinner for members of the U.S. Olympic delegation replete with vodka and whitefish caught in the Volga River, toasting goodwill under paintings of Joseph Stalin and the Politburo.

“We can't reciprocate,” an unnamed American official told The Associated Press. “We simply don't have the money.”

The Americans did hold onto their edge in the medal standings, but just barely. And over the course of two weeks in a city less than 500 miles from the Arctic Circle, the Soviets sent a very loud message that they were very much ready to challenge the U.S. for global athletic supremacy.

Of course, back in the USSR, it would have been easy to think the country had dominated every event. When three Russian women took gold, silver and bronze in the discus, it was front-page news in Moscow. The stories, by the way, carried no mention of American Walt Davis winning gold in the high jump or that U.S. runner Charlie Moore's world record in the 400-meter hurdles.

The breakout star of the Games wasn't an American or a Soviet. It was a 29-year-old staff captain in the Czech Republic Army who ran as if he was in deep agony and his next step would be his last.

Yet Emil Zatopek cared little about form or even proper running decorum while winning the 5,000 meters, 10,000 meters and the marathon, a race he'd never run before he set an Olympic and World record by covering the 26.2-mile distance in 2:23:03. Early on in the marathon Zatopek asked British runner Jim Peters if his pacing was right. When Peters told Zatopek it was, Zatopek took off and cruised to victory by more than 2 1/2 minutes.

Zatopek — whose wife Dana Zatopkova won gold in the javelin — blew off the media after the race and headed back to the Olympic village for a nap.

American Bob Mathias was just 17 when he won the decathlon at the 1948 London Olympics. He stamped himself as the world's greatest athlete at age 21 when he defended his gold medal by posting a record score of 7,887 points over two days and 10 events in Helsinki. He then promptly retired.

“This is for sure,” Mathias said. “There's nothing left.”

Maybe on the track, but not in life. Mathias went on to dabble in acting before serving four terms as a Republican Congressman representing California's 18th district, just south of the Bay Area.

LIFE IN THE FAST LANE

Long before hi-tech swimsuits and dolphin kicks became a thing, the pool at the 1952 Games showcased just how fast the sport was progressing.

During the modest-sized meet — there were only 11 events compared to 34 at the 2016 Summer Olympics — eight Olympic records were set. The Hungarian women dominated, winning seven out of 15 medals.