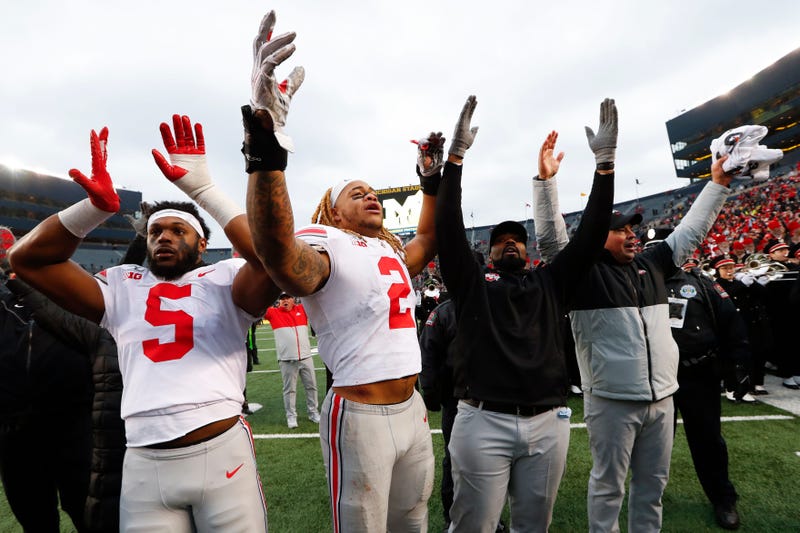 Photo credit FILE - In this Nov. 30, 2019, file photo, Ohio State's Baron Browning (5), Chase Young (2), linebackers coach Al Washington and head coach Ryan Day celebrate after a victory over Michigan in an NCAA college football game in Ann Arbor, Mich. Across the country universities have begun the process of playing through a pandemic. As athletes return to campus, what are they signing up for? Ohio State and Missouri have pledges they are requiring athletes or their parents sign before the players can take part in voluntary workouts at team facilities. (AP Photo/Paul Sancya, File)
By The Associated Press

Ohio State calls it the Buckeye Acknowledgment and Pledge, a two-page document the school asked its athletes to sign before they could begin using team facilities during the pandemic.

The document SMU is requiring its athletes to sign is much more direct: Acknowledgment of Risk for COVID-19 Summer 2020.

Across the country, universities have begun the process of getting ready to play through a public health crisis. As athletes return to campus, what are they signing up for?

Missouri also has a pledge and Ohio State's athletic director said the school got the idea for its document from Big Ten rival Indiana. Baylor'a AD said athletes there are being given a waiver and awareness form to sign. How much legal protection any of these forms provide schools is up for debate, along with the ethics of requiring unpaid students to sign them.

“I worry that in some situations athletes are being used sort of as guinea pigs to demonstrate what we can and can’t do as we bring regular students back to campus,” said Karen Weaver, associate professor of sports management at Drexel University. “I just don't think that’s right.”

SMU has made it clear that at least in part the purpose of its document is to mitigate the school's liability if an athlete contracts COVID-19. Ohio State has said its document is not intended to provide liability protection, though it was crafted with the help of legal counsel.

For some experts, the two documents are not so dissimilar.

If college football is to be played this season, schools will need to build protective bubbles around their teams, frequently testing players, tracing contacts of those who become infected and executing elaborate hygiene protocols. Athletes have already tested positive at more than a dozen schools from Boise State to Clemson, though some schools are not releasing details. On Saturday, Kansas State announced it was pausing voluntary workouts after 14 athletes tested positive, becoming the second school along with Houston to hit the brakes on what is essentially a ramp-up phase to returning to play.

There is only so much a school can do to shield its athletes from a virus they can pick up in a dorm, at a bar, grocery store or church.

“What you would worry about is, this is two hours a day, right?” Baylor athletic director Mack Rhoades said of the voluntary workouts players around the country are participating in this month. “And so what are our student-athletes ... doing the other 22 hours?”

Educating athletes about risk and how to mitigate it is vital. Tapping into their sense of duty and dedication is a sound strategy to get them to modify behavior. Have them sign a document acknowledging that risk, and now it can be argued the schools are using that commitment to the team as a legal shield — even it doesn't use the explicit terminology of a waiver and ensures that scholarships will be honored.

“While on the surface the language in the SMU waiver may look more bothersome than the language in the Ohio State pledge, among the two I consider the Ohio State pledge to be the more morally wrong of the two documents,” said Marc Edelman, a law professor at Baruch College in New York who specializes in sports law. “Because not only does the pledge seem to reduce Ohio State University's liability, but it is written in such a way that college athletes themselves might not even have their guards up to what the university and lawyers are attempting to do.”

Edelman said even a permission slip can be used to claim a legal release of liability. Further muddling the legal questions, liability law varies from state to state. There may be pushback from athletes: Some UCLA football players reportedly are demanding some protections of their own, including an independent health official to ensure virus protocols are being followed.

Gregg Clifton, a former sports agent and attorney for Jackson Lewis based in Phoenix, said to him the difference between Ohio State's pledge and SMU's waiver is clear.

“I don’t think it would be truly an effective block against a lawsuit,” Clifton said of the Buckeye Pledge.

Varriale-Barker said schools asking athletes to sign any documents that could have legal ramifications should be going out of their way to make sure students and parents are aware of that. And that the families may want to consult an attorney before signing.

“I’m less worried about this in the professional sports sense,” Varriale-Barker said. “The people who really need this information are at the collegiate, high school, perhaps, even youth sports level.”

Follow Ralph D. Russo at https://twitter.com/ralphDrussoAP and listen at https://podcastone.com/AP-Top-25-College-Football-Podcast