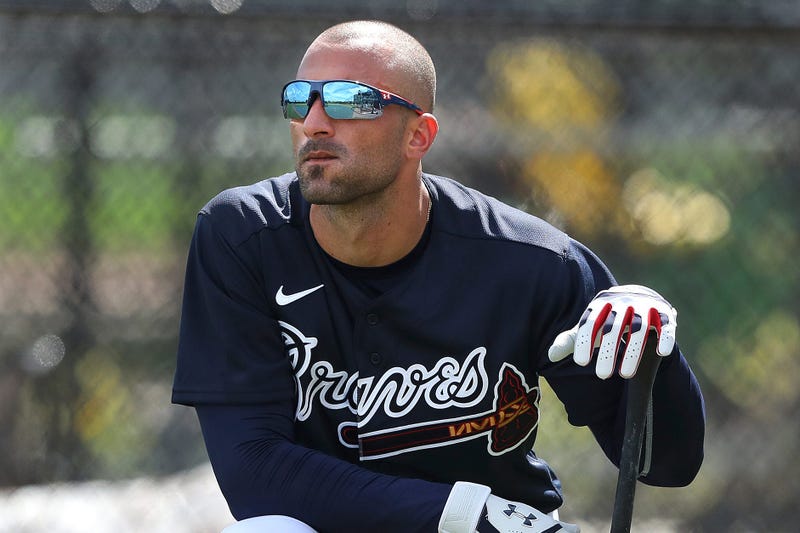 Photo credit FILE - In this Feb. 18, 2020, file photo, Atlanta Braves outfielder Nick Markakis waits to take batting during baseball spring training in North Port, Fla. Markakis is returning to the Braves, three weeks after announcing his decision to opt out of the 2020 season due to his concerns about the coronavirus pandemic. (Curtis Compton/Atlanta Journal-Constitution via AP, File)
By The Associated Press

ATLANTA (AP) — Nick Markakis is returning to the Atlanta Braves, three weeks after announcing he was opting out of the season due to his concerns about the coronavirus pandemic.

Markakis, the veteran outfielder who is in his sixth season with Atlanta, said Wednesday he changed his mind about sitting out after watching his teammates play the first five games.

“Sitting at home, watching these guys compete ... and all the risks they’re going through going out there, in the pit of my stomach I felt I wanted to be out there,” Markakis said.

He said he realized returning was possible following a phone call from Braves general manager Alex Anthopoulos earlier this week.

The 36-year-old Markakis earns $24,691 for each game he on the roster or injured list as part of a $4 million, one-year contract. He says he has the full support of his family, including his three children, in his decision to return.

“It was nice to be home with the family, but more than anything I know my family wanted me to be out there with (the Braves),” he said.

Markakis opted out on July 6, when he said he was uneasy about playing the season without fans and then was swayed by his telephone conversation with teammate Freddie Freeman, who tested positive for COVID-19. Freeman struggled with symptoms that included a high fever of 104.5 degrees, and Markakis acknowledged again Wednesday that he was influenced by Freeman's struggles.

Freeman returned for the start of the season.

Markakis said the call from Anthopulos “made my decision a lot easier.”

“It’s been in my blood since I was 4 years old and it sucks, it sucks watching baseball when you know you can still go out there and compete on a daily basis,” he said. “It eats away at you a little bit.”

Markakis is returning even as he says baseball's struggles amid the pandemic are “probably worse now than it was before,” as the Miami Marlins' season has been delayed by a COVID-19 outbreak.

He said he is relying on “the trust you put in Major League Baseball and the organization you’re with” as he returns.

“Everybody in this world is taking risks on a daily basis,” he said. “You can’t hide and run from it every single day. My teammates are out there every day taking risks and me sitting home watching them on TV just didn’t sit well with me.”

Markakis said he felt guilty about his decision to sit out the season and planned to apologize to his teammates. “I bailed out on them and when I see them I will apologize to them and hopefully be a part of them,” he said.

Markakis said he has worked out regularly but won't know when he will be ready to return to the Braves' roster until he talks with manager Brian Snitker.

Freeman, top setup man Will Smith, right-hander Touki Toussaint and infielder Pete Kozma tested positive for the coronavirus. Toussaint also has returned and Smith, who worked out in Atlanta during the team's opening road trip, could return this week.

The Braves opened their season without their top two catchers, Tyler Flowers and Travis d'Arnaud, after the two felt sick. Both had negative tests and rejoined the team for Wednesday night's home opener against the Tampa Bay Rays.

Markakis is baseball's first player to return after opting out.