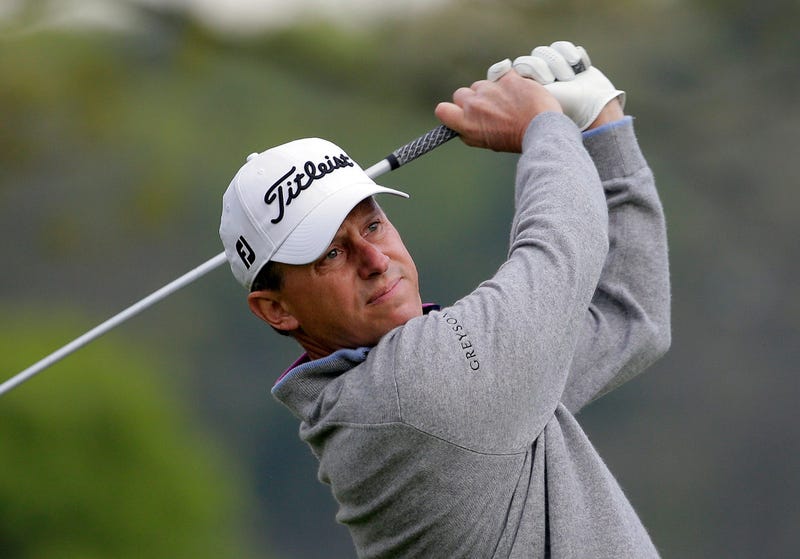 Photo credit FILE - In this May 16, 2019, file photo, Jason Caron tees off on the second hole during the first round of the PGA Championship golf tournament at Bethpage Black in Farmingdale, N.Y. Caron returns for the PGA this year at Harding Park as business has picked up at the Long Island golf club in New York where he is a head golf professional. (AP Photo/Seth Wenig, File)
By The Associated Press

As one of the 20 club pros making a start at the PGA Championship this week, Rob Labritz finds himself in possession of one of the most coveted tee times in golf.

Getting on the tee sheet back at his home course isn't so easy these days, either.

Labritz is the director of golf at the exclusive Glenarbor Golf Club in Westchester County, New York. It has always been the kind of place where members simply show up and play — no reservation needed. But with the spike in play that's been triggered by the COVID-19 pandemic, Glenarbor is presently taking tee times to lend a sense of order to an increasingly crowded course.

It's the same story seemingly everywhere in America, from local munis to posh country clubs to places like Harding Park in San Francisco, this week's host of the PGA, which is open to the public (except for this week).

Golf has emerged as one of the handful of relatively safe, outdoor activities that can be enjoyed despite the coronavirus, so long as the players wear masks inside the clubhouse, keep their distance on the course, keep the flagstick in, and remember to forgo the celebratory high fives and post-round handshakes.

Rounds played across the country in May were up 6% over May 2019, according to the National Golf Foundation. Rounds in June were up nearly 14%. The widespread closure of courses in March and April caused a staggering $1 billion loss in golf revenue (not counting retail and restaurant business), according to NGF. But if the current trends continue, 2020 could end up producing about 2% more rounds played than 2019 — a stat made more impressive because most warm-weather courses lost more than two months of play when the pandemic first hit.

“Awesome for me,” is how Labritz describes it. “I have a passion for getting people hooked on the game so they can play it. I love seeing it boom. I love seeing members’ kids who are 10 years older than when I last saw them, and getting them back into it."

This week's PGA, now taking place in the second weekend of August instead of the third weekend of May, marks that unique spot on the golf calendar where touring pros mingle with the guys who work the pro shops and help keep the sport running at the club level. For most of these 20 players, life is different these days — more daily players on the course, not as many outside tournaments and a slow return to normal inside the pro shop, many of which had been shuttered through the spring.

“For a while there, I was basically doing curbside service,” said Jason Caron, the head pro at the Mill River Club on the Gold Coast of Long Island. “If someone said they need a dozen balls and a hat, I'd basically go in and bring it out to them.”

While so much of the American economy is hurting, golf is seeing a COVID-19-related resurgence that has reversed what had been a slow, steady decline.

In 2005, when Tiger Woods was in his prime and the economy was humming, there were around 30 million golfers in the U.S., according to NGF. That number dropped to about 26.1 million in 2010, the start of the recovery from the Great Recession. In 2018, that number was down to 24 million. An average of around 200 golf courses per year are closing, a number that far outstrips the number being built by land developers who put up houses around new courses by the thousands in the 1990s and early 2000s.

In more recent years, a game that Woods helped bring to a huge new audience was increasingly being thought of as too time-consuming, too expensive, too difficult and, in many cases, too shuttered off from minorities and kids.

But this spring, as America shut down its malls, gyms, restaurants, movie theaters and even its office buildings, golf started getting a fresh look from people who hadn't thought about it in years.

“A lot of people look around and say, ‘there’s nothing else to do, might as well dust off the clubs and let's go play golf,'” Caron said. “They're outside, they're with their friends. They can still have a beer afterward, outside on the patio.”

This week, Caron and his 19 compatriots are leaving the tee times and the golf shop to the rest of the staff so they could make the trip to San Francisco for the first major of 2020 — a trip most club pros can only dream of.

With the normal qualifying tournament scrubbed due to the virus, the PGA chose the top 20 on its 2019 Player of the Year list for the trip to San Francisco. For Caron, who spent time on the PGA Tour in the early 2000s, this marks a back-to-back trip to the major. He's preparing for quite a different experience from his debut, at Bethpage Black last year: No fans. Lots of masks. Lots of hand washing and social distancing.

“I think it's going to take out some of the nerves,” Caron said. “Not playing in front of people, it'll feel more like playing in your three-ball game with two other guys back at home.”

Not to worry. When he returns to New York, he'll see people. Plenty of them. At Mill River these days, it's nonstop tee times from 7 a.m. to noon on Saturdays. Weekdays are busier, too, as people who haven't returned to their offices in the city sneak out for “Emergency Nines” and such. Same thing at Glenarbor, where Labritz works.

“I just have to be super careful, wash my hands like 27,000 times a day, lots of hand sanitizer,” he said. “And now when I teach a lesson, I just ask: ‘Are you healthy? Have you had COVID?’ It's all just a sign of the times.”