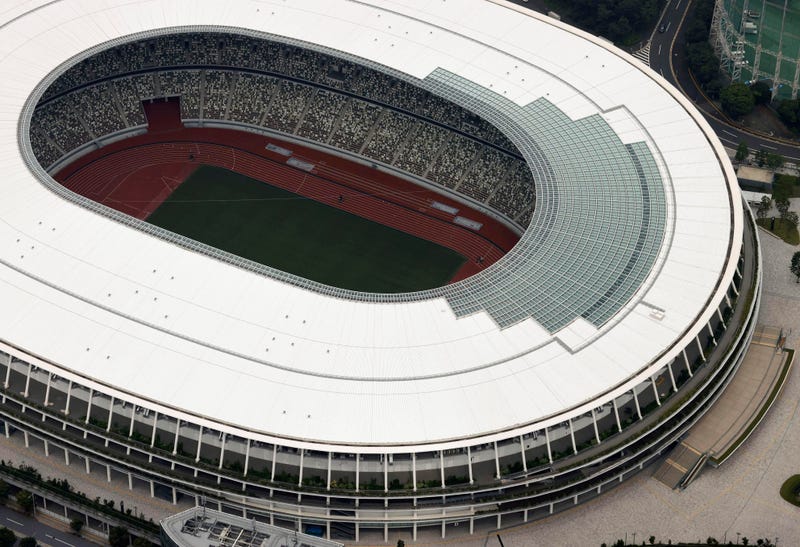 Photo credit This aerial photo shows the New National Stadium, main stadium for the Tokyo Olympics and Paralympics, in Tokyo, Tuesday, July 21, 2020. The postponed Tokyo Olympics have again reached the one-year-to-go mark. But the celebration is small this time with more questions than answers about how the Olympics can happen in the middle of a pandemic. That was before COVID-19 postponed the Olympics and pushed back the opening to July 23, 2021. (Kyodo News via AP)
By The Associated Press

Helen Maroulis will never forget that epic night in Rio.

As she and thousands of her fellow Olympic athletes waited to make the long walk from a volleyball arena to the massive Maracanã Stadium for the opening of the 2016 Summer Games, a giant party broke out.

“They were blasting music," Maroulis recalled in a telephone interview Friday. “We were all sitting around with these giant blow-up beach balls, smacking them in the air and waiting for them to call each of us, country by country."

For all the cynicism that is rightly directed at the excesses of the Olympic movement, it all tends to melt away on the night of the opening ceremony.

It is truly one of the most magical moments in sports.

“Once you walk into that stadium, I don't have words for it," said Maroulis, a Maryland native who won a gold medal in freestyle wrestling four years ago. “It's so cool."

She should've been walking into another stadium on Friday, the dazzling structure that was built in Tokyo to serve as the centerpiece of the 2020 Games.

Instead, it was just another mundane day of training for athletes around the globe, an elite group that was forced to hit an unprecedented reset button because of the devastating pandemic.

The coronavirus has claimed more than 600,000 lives and continues to rage largely unchecked in the United States and other major countries, forcing the Olympics to be postponed for the first time in their history.

American swimmer Ryan Murphy, who won three gold medals at Rio, began his day lifting weights in the temporary gym that he and his roommates have set up in their garage. Then he headed to the pool for two-hour workout.

It didn't even occur to him that it was supposed to be Day 1 of the Tokyo Games.

“I'm definitely bummed that everything has transpired the way it has," said Murphy, who hails from Jacksonville, Florida and now trains in the Bay Area of northern California. “But when the Olympic decision (to postpone the games) came down, I was pretty quick to shift my focus to next year. That's where I've been the past couple of months. I've almost erased from my memory that the Olympics were supposed to start today."

Tokyo organizers marked the one-year-to-go milestone — for the second time — with a brief, no-fans event at the national stadium on Thursday, a striking change from the raucous ceremony held in 2019.

Even with a delay of 364 days, there are still doubts about whether the games can safely begin next summer on July 23. The pandemic continues its deadly rampage, especially in the U.S. and countries such as Brazil, India and Mexico.

While Japan has been spared from the brunt of the virus, its borders are closed to citizens from 129 nations as it attempts to stamp out cases entirely.

Even if the games are staged, they won’t look the same. Eager to reduce the massive costs associated with the one-year postponement, organizers have come up with a lengthy list of items that could be simplified, downsized or cut out entirely. No one knows if the competitions will have to be staged in empty arenas and stadiums to reduce the risk of infection.

Murphy said he's keeping a close eye on the NBA, which plans to finish its season in a bubble-like setting at Walt Disney World in central Florida. The players have been isolated and are tested constantly. No fans will be allowed to attend games.

“If the NBA bubble works, then we have the model," Murphy said. “Yes, the Olympics would look much different if we do not advance on vaccine front, but at least we could fall back on the NBA model."

A fan-less Olympics beats no Olympics at all.

“All the athletes are willing to accept that the the Olympics could look completely different next summer," Murphy said. “That's OK. We all just want to compete, but we want to compete safely. I those two things are possible, then we're all in on it."

Maroulis said the one-year delay could actually be to her benefit, both personally and for the greater good of her fledgling sport.

She’s battled injuries the last two years and might not have been in peak condition if the Olympics had been held in 2020. Also, the extra year gives her and other female wrestlers a chance to bring more attention to their sport, which joined the summer program in 2004 but still attracts scant coverage.

“I’m definitely looking at this in a more positive light,” Maroulis said. “Some of the things I’ve been focusing on lately have been about increasing coverage for female wrestling. It’s actually kind of nice to have another year to work with my teammates toward that goal.”

For all the outrageous costs and infuriating politics, the Olympics still have the potential to bring the world together.

Even if it's for only one night.

“There's so much tension between different groups of people," Murphy said. “The Olympics is the place where you really find one common goal. That's a really beautiful thing.""

Paul Newberry is a sports columnist for The Associated Press.Write to him at pnewberry(at)ap.org, follow him on Twitter at https://twitter.com/pnewberry1963 and find his work at https://apnews.com