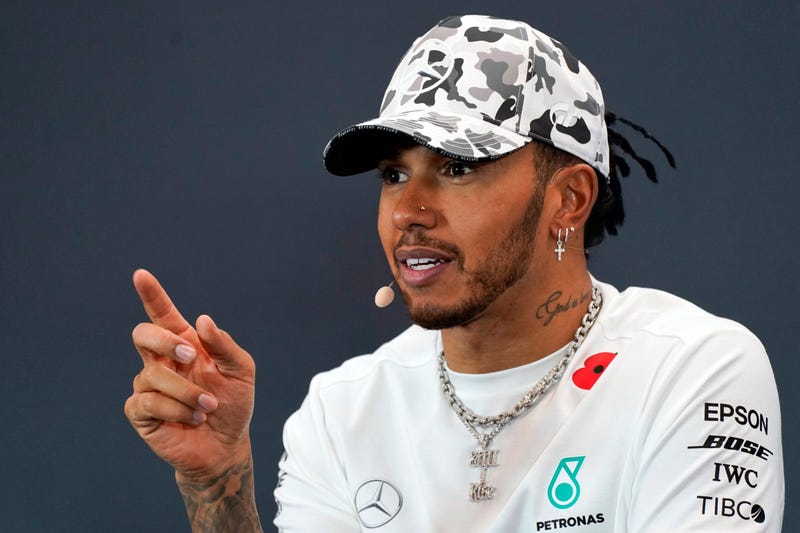 Photo credit FILE - In this Nov. 3, 2019, file photo, Mercedes driver Lewis Hamilton, of Britain, speaks during a news conference following the Formula One U.S. Grand Prix auto race at the Circuit of the Americas, Sunday,, in Austin, Texas. Driving around Formula One tracks without fans cheering loudly at Silverstone and Monza would literally feel “very empty” for world champion Lewis Hamilton. The first 10 races this season have been postponed or canceled amid the coronavirus pandemic, and if F1 does start this summer no fans can watch. (AP Photo/Chuck Burton, File)
By The Associated Press

Formula One races in Azerbaijan, Singapore and Japan were canceled on Friday because of issues arising from the coronavirus pandemic.

The sport’s governing body said it still hopes to deliver up to 18 races in the rearranged 2020 season, with the first eight already confirmed starting with a double-header in Austria in early July.

The Azerbaijan Grand Prix was due to be rescheduled after the postponement of its original race date on June 7, while the Singapore Grand Prix was scheduled for Sept. 20.

Both use street circuits, and the FIA said the long lead times required to construct them “made hosting the events during a period of uncertainty impossible.”

The Japanese Grand Prix, scheduled for Oct. 11, was canceled because of ongoing travel restrictions during the pandemic.

“We are confident in our plans to have between 15-18 races by the time our season concludes in Abu Dhabi in mid-December,” the FIA said, adding that it expects to publish the finalized calendar before the season-opening race in Austria on July 5.

The Red Bull Ring in Spielberg also will host a race on July 12. The next race will be in Hungary on July 19, followed by consecutive races at the British GP in Silverstone on Aug. 2 and 9 after the British government exempted elite sports from its current quarantine on foreign visitors.

Further races are scheduled for Spain on Aug. 16 and Belgium on Aug. 30, with Italy completing the European swing on Sept. 6.

No spectators will be allowed to attend the opening eight races. This may change later in the season if health conditions allow.