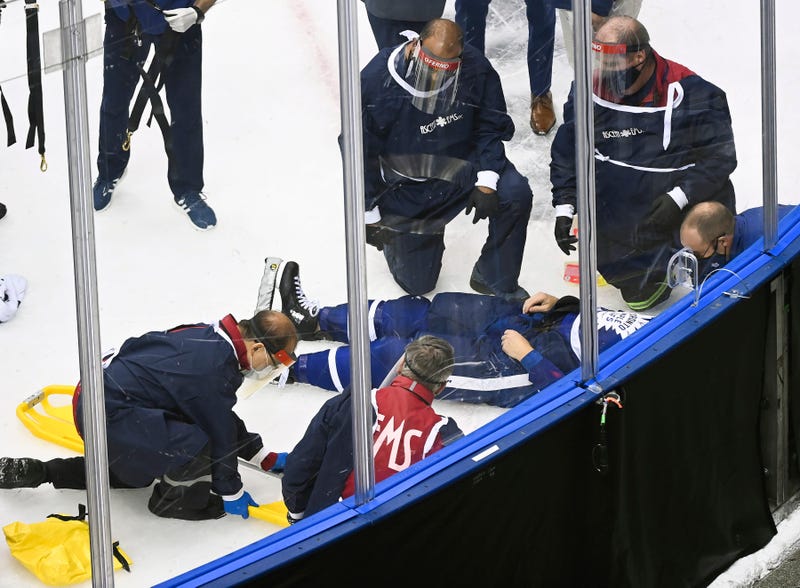 Photo credit Medical staff surround Toronto Maple Leafs defenseman Jake Muzzin as he lays on the ice waiting to be placed on a stretcher as they play against the Columbus Blue Jackets during the third period of an NHL hockey playoff game Tuesday, Aug. 4, 2020 in Toronto. (Nathan Denette/The Canadian Press via AP)
By The Associated Press

TORONTO (AP) — Toronto Maple Leafs defenseman Jake Muzzin has been discharged from the hospital and is back at the team’s hotel, and will not return to the lineup during Toronto’s playoff qualification series with the Columbus Blue Jackets.

The Maple Leafs said in a statement that Muzzin will remain in quarantine within the hotel and “look to rejoin his teammates upon recovery.”

Muzzin was injured late in the third period of Toronto’s 3-0 win over Columbus on Tuesday.

With the Leafs killing a penalty, Muzzin took a crosscheck from Columbus center Pierre-Luc Dubois before stumbling and jamming his head/neck into the leg of Blue Jackets winger Oliver Bjorkstrand.

Muzzin couldn’t get up after the collision and had to be taken off the ice on a stretcher.

The best-of-five series, which is tied 1-1, resumes Thursday night at Scotiabank Arena.