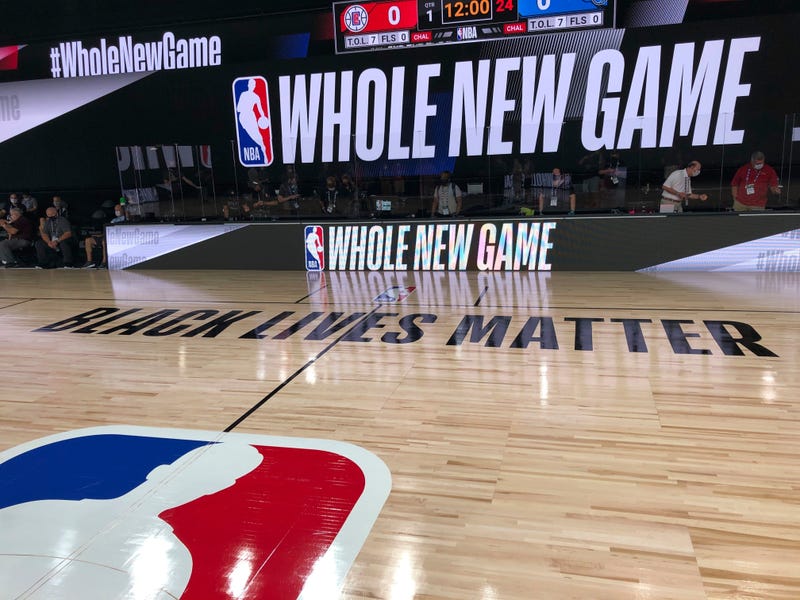 Photo credit A basketball court is shown at the ESPN Wide World of Sports complex in Kissimmee, Fla., Tuesday, July 21, 2020. The NBA's marketing motto for the restart of the season at Walt Disney World is “Whole New Game,” and in many respects, that’s very true. (AP Photo/Tim Reynolds)
By The Associated Press

During a normal NBA season, the sights and sounds of arenas serve as both a showy backdrop and home court advantage for its teams.

But with no fans allowed in the stands for the upcoming restart because of the ongoing COVID-19 pandemic, the league’s Orlando-area bubble restart will have a decidedly different feel for both players and coaches, as well as the television audience watching from afar.

The NBA has promised to do its best to bring some of the familiar noises and environment that players are used to playing in and fans have grown accustomed to seeing when the curtain officially drops on Thursday night.

Count former NBA coach Stan Van Gundy, who will serve as an analyst for one of TNT’s broadcasts on opening night, among those curious to see how players will be affected by the atypical setup and what kind of previously inaudible insights on the court could be available to fans peering in remotely.

“I think the idea is right, because with no noise, it’s almost eerie,” Van Gundy said. “I mean, it’s just not what any player or coach is used to.”

Visually, the NBA will be taking advantage of the unique setting by trying to bring fans even closer to the action on the court via a 31-camera setup, the majority of which will be operated robotically.

NBA head of Next Gen telecast Sara Zuckert said the league will be employing an “audio soundscape” that will try to mimic — at least as much as possible — teams’ home arenas.

The league began testing some of their new enhancements during scrimmages last week, though they are saving a lot for when games officially count.

“Amplifying microphones in the arena can really lead to an enhanced feel and sound. You’ll hear a lot of sneaker squeaks and ball bounces,” Zuckert said.

The league has also worked with Microsoft to digitally bring actual fans' faces and voices of fans into broadcasts via their Microsoft Teams platform. These select fans, which will be determined by the home team each game, will be both seen on screens inside the arena and be heard on the telecasts.

Van Gundy said accounting for the fan variable is about necessity as much as innovation.

“It’s not like (NBA Commissioner) Adam Silver sat down and said, ‘Hey, you know, let’s do some of these things. They’ll be better than having fans at the game.’ That’s not what happened,” Van Gundy said. "It was we can’t have fans at our game, how can we make the atmosphere the best it can be under the circumstances? And that’s what they’ve attempted to do.”

While some on-court interactions will remain muted even with enhanced audio, it certainly won’t drown everything out. There’s simply no way to account for the lack of the sounds usually created by crowds in NBA arenas that seat anywhere from 18,000 to 20,000.

It could possibly include everything from the occasional curse word getting through to other on-court interactions that teams might want to keep quiet. And the benches could be a factor in providing off-court energy to fill the void created by the lack of fans.

All of it should provide some gifts for players and fans alike, Clippers coach Doc Rivers said.

Players know it will be different as well, though some don’t expect much of anything beyond good-natured banter — which even referees also join in from time to time.

“Honestly, everybody’s so worried about the trash talking," Utah guard Donovan Mitchell said. "There’s a lot of just jokes being made on the floor. Obviously, come playoff time that kind of goes out the window.”

Trash talk aside, TNT play-by-play man Kevin Harlan said fans will also hopefully get an appreciation for how much coaching happens on the floor, such as by players like Oklahoma City point guard Chris Paul.

“I think it’s going to catch people and stun others by surprise when they hear just how much he vocally controls a game,” Harlan said. “He uses his voice as much as any player in the game on both ends of the floor — calling out defenses, calling out the offense, directing players in front, telling guys to help shore up an issue. ... He’s just one example of many that I think people are really going to be surprised at just how much communication is going on on the floor.”