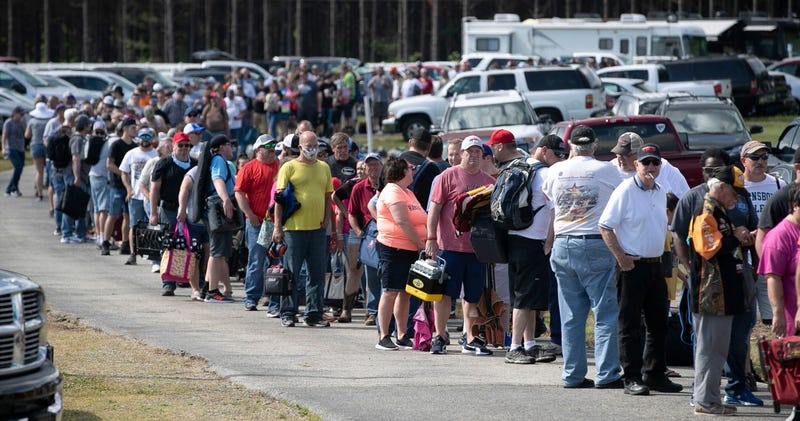 Photo credit In this Saturday, May 23, 2020 photo, hundreds of race fans wait in line to purchase tickets at the Ace Speedway on in the rural Alamance County community of Altamahaw near Elon, N.C. North Carolina Gov. Roy Cooper’s administration has ordered closed a small stock-car track that’s allowed large crowds to gather repeatedly for weekend races well above COVID-19 limits for mass gatherings. Cooper’s health secretary says Ace Speedway in Alamance County is an “imminent hazard” for the virus' spread and can't reopen unless it creates a safety plan to keep fans away. (Robert Willett/The News & Observer via AP)
By The Associated Press

RALEIGH, N.C. (AP) — The administration of North Carolina Gov. Roy Cooper has ordered the closure of a small stock-car track that's allowed large crowds to gather repeatedly for weekend races, declaring it an “imminent hazard” for the spread of COVID-19.

Media outlets have reported crowds at the speedway exceeding 2,000 people, including a gathering last Saturday even after the Democratic governor's office wrote a letter stating the speedway's actions were in “open defiance” of the health restrictions. Media reports indicated many attendees at three weekend races since late May sat and stood near each other, and few wore masks.

The action came after Alamance County Sheriff Terry Johnson announced on Monday he wouldn't issue a misdemeanor citation to the speedway. He questioned the legality of Cooper's restrictions and said local tracks elsewhere weren't being punished for opening. Cooper had said he would act if Alamance County officials wouldn't.

“North Carolinians are making huge sacrifices to protect their families and neighbors. This virus is highly contagious and very dangerous,” Health and Human Services Secretary Mandy Cohen said in a news release Tuesday. "Bad actors who flagrantly violate public health orders put all of our families and loved ones at risk.”

Disclosure of the legal action came as North Carolina reported another record high of virus-related hospitalizations at 774 as of Tuesday morning. There have now been over 37,150 positive COVID-19 cases in the state since the pandemic began and about 1,030 deaths, according to Department of Health and Human Services data.

The number of tests completed has exceeded 553,700, and health officials unveiled updated testing guidance that encourages doctors to consider testing of people who have participated in protests and other mass gatherings where exposure could have occurred.

Cohen's order issued Monday tells the owners they must announce publicly that the races are canceled until Cooper's executive order expires June 26, although that could be extended. She said the speedway could reopen sooner if its operators create a plan that would keep spectators away, perform daily symptom checks of employees and conduct frequent cleaning.

The next regularly scheduled race at the 0.4-mile track is June 19.

The speedway appeared to attempt to bypass the governor's rules last Saturday by suggesting the gathering was protected by a First Amendment exemption. A placard at the speedway read: “This event is held in peaceful protest of injustice and inequality everywhere.” Demonstrations had occurred in major cities over the past 10 days after the Minnesota police custody death of George Floyd.

NASCAR, which resumed racing last month at its major tracks without any crowds, announced Tuesday it would allow some fans back for races later in the month in Florida and Alabama.

Cooper's executive orders limiting commerce and movement during the pandemic have caused him grief from industries still unable to open. He's been sued by bars, gyms and adult entertainment clubs seeking to overturn his restrictions. A Business Court judge on Tuesday denied motions by a handful of gyms, martial arts facilities and a primarily outdoor bar seeking to reopen immediately, but the lawsuits aren't over.

Cooper vetoed a bill last week from the Republican-controlled legislature that would have allowed bars to reopen outdoors only and give more outdoor seating options to restaurants that still must cap their indoor capacity. The governor said it prevented him and other emergency officials from easily shutting them down in case of a surge of the virus.

After sharp debate weighing the physical health of residents and financial struggles of business owners, the state Senate voted late Tuesday for a measure that contains the bar and restaurant language while also partially reopening gyms. It also contains a new provision letting Cooper close them down again provided he receives the backing of other statewide elected leaders.

While some Democrats complained the provision would let Republican Council of State members block such action by Cooper, seven Democrats joined all Republicans in voting for the full measure. The bill needs one more affirmative House vote before heading to Cooper's desk.