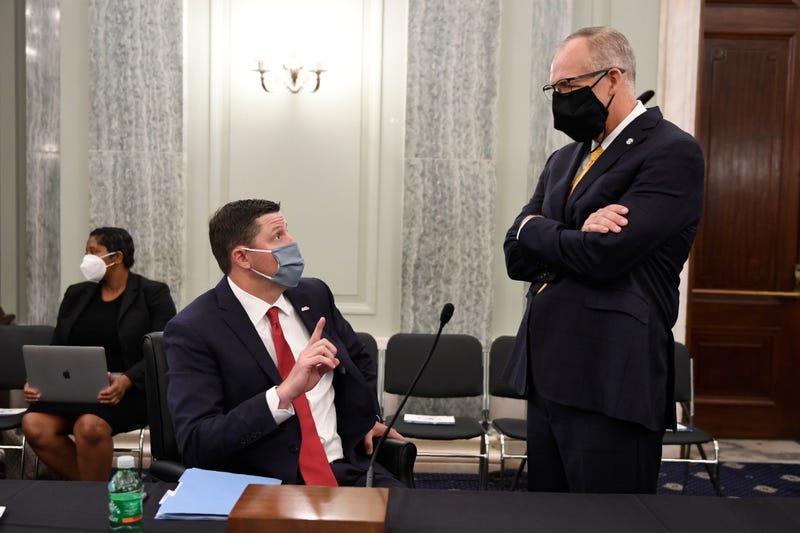 Photo credit University of Mississippi Vice Chancellor for Intercollegiate Athletics Keith Carter, left, talks with Southeastern Conference Commissioner Greg Sankey, right, before they testify at a Senate Commerce Committee hearing on Capitol Hill in Washington, Wednesday, July 1, 2020. The hearing is looking at the National Collegiate Athletic Association Board of Governors' recent report on student-athlete compensation and the modernization of rules related to name, image, and likeness (NIL) commercialization. (AP Photo/Susan Walsh)
By The Associated Press

Southeastern Conference Commissioner Greg Sankey told a U.S. Senate committee Wednesday there needs to be a uniform federal law to regulate the compensation of college athletes instead of a series of state versions with differing requirements.

Sankey was part of a panel discussing the potential impact of allowing athletes to profit from the use of their name, image or likeness (NIL), one of the more controversial issues in college athletics.

Three states have already signed athlete-compensation bills into law and others are considering their own versions. The hearing was held exactly one year before Florida’s law is scheduled to be the first to take effect.

“It would be difficult and confusing,” Sankey said when asked about managing various state laws among the league’s 14 member schools. “Knowing the competition within my 11 states, I can foresee quickly the other 10 one-upping each other. And I think that’s a problem for fair and equitable competition.”

A federal law would eliminate some of those issues, but the NCAA would like a say in what it might look like and has been busy on Capitol Hill recently, as have the major college sports conferences.

Sankey was joined by Mississippi vice chancellor for intercollegiate athletics Keith Carter and Ohio State president emeritus Michael Drake, the chairman of the NCAA's board of governors that signed off in April on recommendations to allow athletes to reach endorsement deals. Former Miami and NFL player Eric Winston also testified with University of Baltimore law professor Dionne Koller.

“I think you all have to agree: This is an issue that has gotten away from you,” Sen. Marsha Blackburn, a Tennessee Republican, told the group.

In a filing with the committee, Sankey also wrote that the five power conferences – the SEC, the Atlantic Coast Conference, the Big 12, Big Ten and Pac-12 – believe “a strategy worth considering” would be to make the “pre-enrollment process” and first semester of coursework off-limits for NIL activity.

In his own filing, Carter wrote that Ole Miss supported having an independent organization provide national oversight of NIL issues while arguing that federal legislation would “provide much-needed clarity” and a uniform national structure for schools to follow.

The time for the NCAA and legislators to build the structure — dubbed “guardrails" by the NCAA — for college athletes to cash in on endorsement deals is dwindling. The plan is for NCAA membership to vote on adopting NIL rules by January, just six months ahead of Florida's law.

California and Colorado already have approved laws that go into effect in January 2023. Another 34 states had introduced at least one piece of NIL legislation as of May, according to research by Tulane sports law program director Gabe Feldman.

Florida Sen. Marco Rubio recently introduced a bill that would protect the NCAA from being challenged in court if it changes its rules to allow for athletes to reach NIL deals. And a commission that promotes uniformity among state laws is moving toward creating its own standardized version for states to adopt.

In response to a question from GOP Sen. John Thune of South Dakota, none of the panelists said they would support a numerical limit on the amount of money a college athlete could make through NIL deals. Rather, several noted the need for what Koller described as “some common sense limits” that focus more on elements such as preventing schools or boosters from becoming involved in deals to be used as recruiting inducements.

Already coaches in non-revenue sports are worried about the potential impact of NIL legislation on their programs. On Wednesday, Thune and Sen. Jon Tester, a Democrat from Montana, both expressed concern about how regulations could negatively impact smaller schools in recruiting.

“We cannot give advantages to the money conferences so to speak,” Tester said. “If it does, we haven't done our job.”