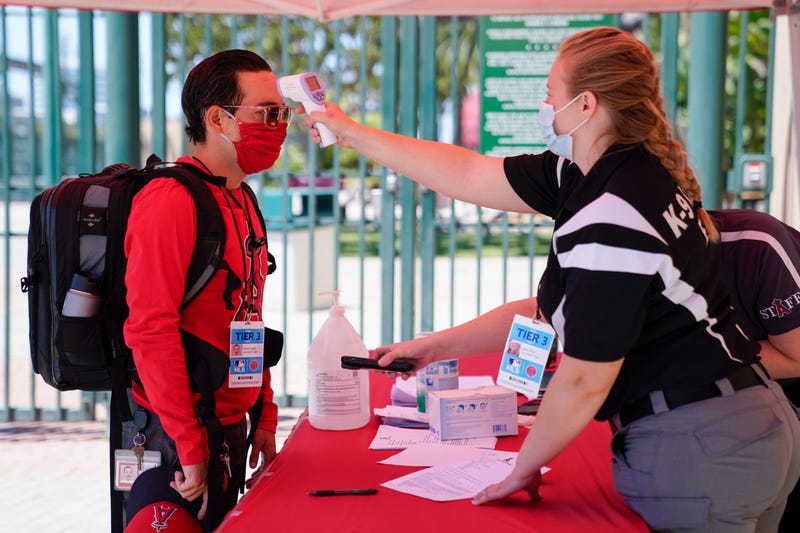 Photo credit Ricardo Zapata, left, a photographer for the Los Angeles Angels, has his temperature taken by Sarah Morris before entering Angels Stadium for baseball practice on Monday, July 6, 2020, in Anaheim, Calif. New protocols like temperature checks, social distancing, and limiting amount of people allowed in sports venues have been put in place due to the spread of COVID-19. (AP Photo/Ashley Landis)
By The Associated Press

The California Community College Athletic Association is moving all sports, even football, to the spring.

The decision announced Thursday was one of three potential scenarios approved by the CCCAA Board of Directors last month.

“I know I speak for the entire CCCAA Board that moving Fall athletics to Spring 2021 is a huge disappointment,” said Dr. Erika Endrijonas, Board Chair and President of Pasadena City College. “However, the need to keep our student-athletes and the amazing coaches and athletic trainers who work with them safe was simply the only option available with the virus spiraling out of control across the state.”

Sports will have a 30% decrease in the maximum number of contests and postseason events will be regional.

The CCCAA has 110-member colleges and approximately 24,000 athletes.

The leagues announced the move Thursday and issued a joint statement, saying that “the welfare of our student-athletes is sacrosanct and must preempt all other considerations when evaluating any return to competition efforts.”

In its release, the CIAA said it would explore a possible modified competition schedule for football, volleyball and cross country for the spring. There is no time frame for making that decision. The league, based in Charlotte, North Carolina, said it would discuss plans for winter and spring sports.

Atlanta-based SIAC said it would also look at moving some fall sports such as football into the spring.

Memphis is cutting 14% from its administrative and sports operation budgets.

The Tigers finished 17th in the country after a loss in the Cotton Bowl and had a game at Purdue scheduled for Sept. 12 cut by the Big Ten’s decision to play only conference games this fall.

Veach said in a release Thursday that he appreciates the flexibility and sacrifices from his coaches and staff during what he called “arguably never been a more uncertain financial period in our history.”

Real Madrid forward Vinícius Júnior has tested negative for the new coronavirus and has joined the squad for the Spanish league game against Alavés on Friday.

Coach Zinedine Zidane had said earlier Thursday that the Brazilian forward needed to have another coronavirus test after an initial result came out inconclusive.

Madrid needs a win to regain a four-point lead over second-place Barcelona with three rounds to go. The Catalan club defeated Espanyol 1-0 on Wednesday.

Cleveland Indians outfielder Franmil Reyes apologized for putting himself and his teammates at risk by not wearing a mask or practicing social distancing at a weekend holiday party.

The club kept Reyes away from its training camp after he was spotted on social media attending a Fourth of July get-together. Reyes had to be re-tested for the new coronavirus and cleared by Indians medical personnel before he was allowed to practice.

This will be his first full season with the Indians, who acquired him last year in a trade with the San Diego Padres. The 25-year-old slugger hit a combined 37 homers last year for San Diego and Cleveland and may get some playing time in right field.

The Seattle Seahawks are allowing season ticket holders the option to pause their season tickets and receive a refund for the upcoming NFL season or keep a credit in their account for the 2021 season.

Fans who choose to keep their tickets for the 2020 upcoming season will have priority if there are schedule changes or changes in stadium capacity.

The Seahawks did not say how many fans would be allowed inside CenturyLink Field. Earlier this week, the Baltimore Ravens said they’ll seat fewer than 14,000 fans at M&T Bank Stadium.

The Ivy League school announced Thursday that men’s and women’s swimming and diving, men’s and women’s golf, and men’s lightweight rowing, have been cut, effective immediately. That drops to 30 the number of varsity teams and will reduce the number of recruited athletes in incoming classes by 10%. A total of about 110 student-athletes are affected. Jobs for 15 staff, including eight coaching positions, also will end.

The change in the number of teams does not alter the college's compliance with federal Title IX regulations, which require equal opportunities for women and men in varsity athletics, Dartmouth President Philip J. Hanlon said in an email to faculty, students, staff, and undergraduate families.

Dartmouth also is permanently closing its Hanover Country Club, which has deficits expected to swell to $1 million a year.

The cuts are projected to save more than $2 million as the school addresses a projected $150 million deficit caused by the COVID-19 pandemic.

Planning for a season they acknowledge will be “very different,” the Cleveland Browns told their season-ticket holders they can opt out of the 2020 season without penalty and other plans related to the COVID-19 virus and its impact on the NFL.

The Browns sent a letter to their fans on Thursday that outlined some new policies due to the pandemic. Anyone attending a game at FirstEnergy Stadium will have to follow physical-distancing guidelines and wear “mandated facial coverings.”

The team did not say how many fans will be allowed in the 67,000-seat stadium, which has been the Browns’ lakefront home since 1999.

Earlier this week, the Baltimore Ravens said they’ll seat fewer than 14,000 fans at M&T Bank Stadium. The Browns are scheduled to open the season there on Sept. 13.

If Cleveland season-ticket holders decide not to attend games in 2020, they can retain their same seat location in 2021.

Brazil’s soccer confederation said Thursday its main national championship will be played between Aug.9 and Feb.21.

The Brasileirāo tournament usually starts in May and ends in December but was delayed by the COVID-19 pandemic.

The confederation also said it expected World Cup qualifiers to be played in the same dates decided by FIFA. The earliest fixtures are scheduled for September.

More than 68,000 people have died from COVID-19 in Brazil, and another 1.7 million are confirmed to have the disease.

The plan to have fans at the World Golf Championships event in Memphis has been scrapped.

Officials announced Thursday that the FedEx St. Jude Invitational at TPC Southwind will not have any spectators due to what they call “an abundance of caution.”

Tournament officials have been talking extensively with both the PGA Tour and local and state health officials. Executive director Darrell Smith says they had a safety plan for limited spectators but ultimately felt it was best to host without any fans. Ticket purchases will be refunded automatically.

The PGA Tour and the Memorial announced Monday a reversal of their plan for a limited amount of spectators next week in Dublin, Ohio, because of the COVID-19 pandemic. This means that every PGA Tour event through at least July will be held without fans since play resumed June 11 in Texas.

The Atlantic Coast Conference is putting fall competitions on hold until at least Sept. 1 due to the coronavirus pandemic, a move that won’t affect football as of now.

Schools won’t be able to hold exhibitions or regular-season competition before that date, and it will be up to the schools to determine whether to reschedule any affected events. But the ACC isn’t barring teams from holding workouts and preseason practices “in anticipation of a fall season.”

N.C. State athletic director Boo Corrigan had announced in early June that the school had begun a schedule of allowing athletes to return in phases to campus.

That plan started with testing of members of the football, men’s basketball and women’s basketball programs who live locally. Athletes who were cleared were then allowed to participate in voluntary workouts in small groups.

On Wednesday, rival North Carolina said it was pausing football workouts for at least a week. That came after 37 positive results among 429 tests administered to UNC athletes, coaches and staff as they returned to campus in phases starting in June.

Zidane says “the doctor informed me that the test had come out wrong and we were going to repeat it.”

Zidane says the Brazilian's test was not positive. He says “sometimes there are errors. It wasn’t negative or positive.”