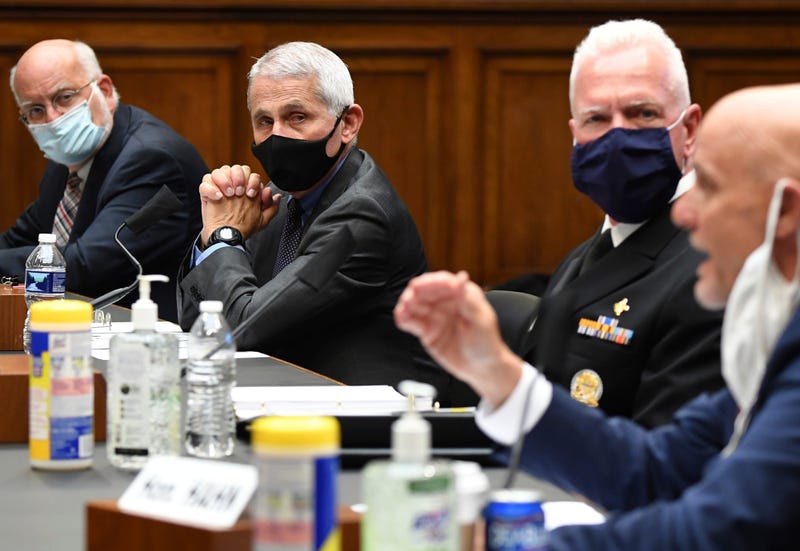 Photo credit From left, Dr. Robert Redfield, director of the Centers for Disease Control and Prevention, Director of the National Institute of Allergy and Infectious Diseases Dr. Anthony Fauci, and Adm. Brett Giroir, head of the U.S. Public Health Service, listen as Food and Drug Administration Commissioner Dr. Stephen Hahn testifies before a House Committee on Energy and Commerce on the Trump administration's response to the COVID-19 pandemic on Capitol Hill in Washington on Tuesday, June 23, 2020. (Kevin Dietsch/Pool via AP)

Dr. Anthony Fauci, the nation’s top infectious disease expert, told lawmakers in Washington on Tuesday that “the next couple weeks are going to be critical” in Texas and other states that are trying to curtail an alarming spike in new cases.

The infection rate in Texas has doubled since late May to nearly 9%. And on Monday, Texas recorded an 11th consecutive day of record COVID-19 hospitalizations with more than 3,700.

— France's official contact-tracing app has been downloaded 1.9 million times but sent only 14 notifications in three weeks

— Hotels in Greece will have basic isolation and treatment areas, doctors on call this summer.

— One of the Arab world’s most prestigious universities has endured civil war, staff kidnappings and economic crises in its 154-year history. The American University of Beirut now confronts a triple threat simultaneously in a pandemic, a recession and the collapse of Lebanon’s currency. Meanwhile, a Saudi official says the hajj pilgrimage that usually draws up to 2.5 million Muslims is likely to see only a few thousand pilgrims.

— A coronavirus outbreak linked to a slaughterhouse in Germany has led a state government to impose week-long lockdown measures. More than 1,500 people tied to the slaughterhouse have tested positive. Thousands more are quarantined. The governor of North Rhine-Westphalia says area cinemas, fitness studios and bars will be closed again. In related news, China’s ban of imports from one Tyson Foods poultry plant with infected workers has raised concerns for the U.S. meat industry.

— People are flocking to beaches for vacation after being cooped up by COVID-19 for months. But the coronavirus is taking no vacation. The U.S. state of South Carolina now has the fourth-highest new infection rate in the nation when adjusted for population. One hot spot is around Myrtle Beach, which has seen COVID-19 cases jump from fewer 300 at the start of June to nearly 1,600. And that only counts residents, not visitors. Local entrepreneurs fear more infections could result in bad publicity.

Follow all of AP's pandemic coverage at http://apnews.com/VirusOutbreak and https://apnews.com/UnderstandingtheOutbreak

WASHINGTON -- The chairman of a House committee conducting an oversight hearing on the Trump administration’s COVID-19 response says the panel was snubbed by the head of Medicare and Medicaid.

Seema Verma, administrator of the Centers for Medicare and Medicaid Services, would have joined Dr. Anthony Fauci and other top health officials testifying Tuesday before the House Energy and Commerce Committee.

She “could have provided valuable insight (about) what is working, what still needs to be improved and what more we can do to help these vulnerable communities,” said Pallone. “Unfortunately, she decided not to come.”

There was no immediate comment from the Medicare agency. Pallone said he will keep pushing for Verma to appear before the committee.

SALT LAKE CITY — Utah’s Republican governor says he has no plans to shut down the economy even though he shares some of the concerns raised in a memo by the state’s epidemiologist who warned a “complete shutdown” might be imminent if the state can’t stop a prolonged spike of coronavirus cases.

Gov. Gary Herbert tweeted late Monday night that he appreciated the analysis by epidemiologist Angela Dunn in her memo that detailed the severity of a spread of COVID-19 that has doubled the infection rate and daily case count since Herbert allowed many businesses to reopen in mid-May.

But he reiterated his stance that economic growth can happen while keeping people safe.

“We will work to stem this tide, but I have no plans to shut down Utah’s economy,” tweeted Herbert.

Dunn recommended that the state reimpose some restrictions on businesses and group gatherings unless the state lowers its weekly average of case by more than half by July 1.

WASHINGTON -- Top federal health officials say they continue to deal with the World Health Organization despite President Donald Trump’s decision to pull out of the U.N. health agency, which serves as a forum for the global coronavirus response.

Dr. Anthony Fauci of the National Institutes of Health and Dr. Robert Redfield, head of the Centers for Disease Control and Prevention, told the House Energy and Commerce Committee on Tuesday that they continue to have regular interactions with scientific peers at the WHO.

Trump pulled the U.S. out of the World Health Organization after complaining about its response to the coronavirus and alleged favoritism toward China.

Fauci and Redfield both said they were not directly consulted about the president’s decision.

Fauci said his National Institute of Allergy and Infectious Diseases has a memorandum of understanding that governs regular collaboration with the WHO. Redfield said his agency is working with the world body on Ebola, polio and influenza.

BATON ROUGE, La. -- The number of new COVID-19 cases reported in Louisiana jumped by more than 1,356 Tuesday, and the number of people hospitalized with the disease ticked up by 16.

The statewide increase to a total of 51,595 cases was the largest single-day rise in reported cases since early April — excluding days when delayed reporting of backlogged cases accounted for increases.

The daily record was reported by the state health department a day after Gov. John Bel Edwards announced that the recent surge in cases would prevent Louisiana from further easing restrictions aimed at keeping the new coronavirus from spreading.

On Twitter, the state health department said 95% of the cases reported Tuesday were the result of “community spread,” as opposed to infections in nursing homes or other such settings.

The pandemic death toll in Louisiana as of Tuesday was 3,021.

Turkey has seen an increase in new cases since the government authorized cafes, restaurants, gyms, parks, beaches and museums to reopen and eased stay-at-home orders for the elderly and young at the start of June.

WASHINGTON — The head of the U.S. Food and Drug Administration says his agency is maintaining an arm’s-length relationship with a White House-led effort to quickly produce a COVID-19 vaccine once it’s approved.

The White House effort is called “Operation Warp Speed,” and it’s geared at having ready the manufacturing capacity and distribution channels for a massive vaccination program.

But FDA Commissioner Stephen Hahn told the House Energy and Commerce Committee on Tuesday that his agency is careful not to work in tandem with Warp Speed.

“We absolutely must maintain regulatory independence and make the right decision for the American people based on the science and the data,” said Hahn.

WASHINGTON — Dr. Anthony Fauci says he thinks the United States will be better prepared if the country has a second wave of coronavirus infections this fall and winter.

Fauci told members of the House Energy and Commerce Committee on Tuesday that the U.S. should have the ability to do 40 million to 50 million tests per month by that time, giving public health officials the ability to understand the dynamics of the spread of the virus.

The director of the National Institute of Allergy and Infectious Diseases says that supplies of masks, gowns and other equipment are also being replenished in the national stockpile, and U.S. production is being built up.

Fauci also told the committee he doesn’t regret the American public wasn’t urged sooner to wear face masks because health personnel needed equipment when there wasn't enough to go around early on.

Republican Rep. David McKinley of West Virginia asked Fauci if he thought President Donald Trump was being judged unfairly about his response to the pandemic.

Fauci said the question is unfair and replied, “I work in the White House, and I believe everyone there is doing everything” they can.

LAS VEGAS — The U.S. state of Nevada has reported its biggest one-day increase in new coronavirus cases for the fourth time in the past eight days.

The record 462 new confirmed cases reported Tuesday came amid an uptick that started about two weeks after casinos in Las Vegas reopened.

Nevada’s governor said last week that he plans to leave current restrictions on businesses and gatherings in place at least through the end of June while the state's climbing number of infections is evaluated.

WASHINGTON-- The head of the U.S. Food and Drug Administration tells House lawmakers he hasn’t felt any political pressure from the Trump administration to make decisions related to therapies for COVID-19.

The FDA in March initially green-lighted use of the drug but said new studies strongly suggest it doesn’t work against the disease caused by the coronavirus.

Hydroxychloroquine also can sometimes cause dangerous heart side effects. The FDA said that risk outweighed the drug’s unproven benefit for COVID-19 patients.

Democratic Congresswoman Anna Eshoo asked FDA Commissioner Stephen Hahn to immediately report any political pressure on the FDA to members of Congress. Hahn said he would.

PHOENIX — Arizona reported a new daily record of nearly 3,600 additional coronavirus cases on Tuesday as the state continued to set records for the number of people hospitalized, in intensive care and on ventilators for COVID-19.

Tuesday’s report took the state’s total caseload in the pandemic to 58,179, while 42 more deaths reported Tuesday raised the death toll to 1,384.