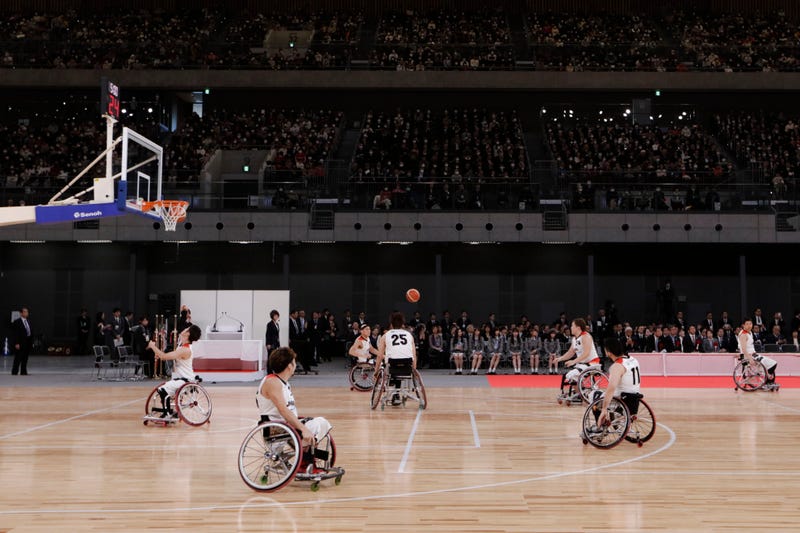 Photo credit FILE - In this Feb. 2, 2020, file photo, members of Japan's national wheelchair basketball team warm up on the court during a grand opening ceremony of the Ariake Arena, a venue for volleyball at the Tokyo 2020 Olympics and wheelchair basketball during the Paralympic Games, in Tokyo. The Tokyo 2020 Paralympic schedule remains essentially unchanged for the event postponed until next year, organizers said on Monday, Aug. 3, 2020. Tokyo organizers made the same announcement several weeks ago for the postponed Olympics. The Paralympics open on Aug. 24, 2021, and close on Sept. 5. The Olympics are to open on July 23. (AP Photo/Jae C. Hong, File)
By The Associated Press

TOKYO (AP) — The Tokyo 2020 Paralympic schedule remains essentially unchanged for the event that has been postponed until next year, organizers said on Monday.

Tokyo organizers made a similar announcement several weeks ago for the postponed Olympics.

Organizers have lined up the same 43 venues that would have been used this year for the Olympics and Paralympics. The massive Athletes Village and the media center have also been secured.

“There are no major changes to the schedule,” Hide Nakamura, the games delivery officer, said. “Having the schedule being fixed is a big step for athletes.”

Local organizers and the International Olympic Committee have offered few details about how these two massive events can be held in the midst of a pandemic, or even the wake of a pandemic. They say they are trying to prepare for many scenarios that could include quarantines, limited fans, and massive cuts in staffing.

Some medical experts have said the Olympics and Paralympics cannot be held safely unless there is a vaccine. Others have said quarantines could be enough to safeguard Japan from athletes coming in from more than 200 countries and territories.

The Olympics involve 11,000 athletes and 4,400 are scheduled for the Paralympics. In addition, tens of thousands of games officials, media, and hospitality providers work behind the scenes. About 4.5 million tickets have already been sold for the Olympics.

The Paralympics involve 539 events and 22 sports.

Japan has attributed just over 1,000 deaths to COVID-19, modest numbers by global standards.

However, Tokyo has seen its new cases rise steadily in the last several weeks. Tokyo Governor Yurkio Koike and Prime Minister Shinzo Abe have resisted calling for a state of emergency, but bars and restaurants in Tokyo have been told to close early.

Organizers have given no cost estimate for the delay, although media in Japan have put it at $2 billion to $6 billion. Most of the costs are to be picked up by Japanese governments. The International Olympic Committee has said it will chip in $650 million.

The costs of delay come on top of $12.6 billion that Tokyo says it is officially spending to prepare. A government audit has said the costs are twice that much.