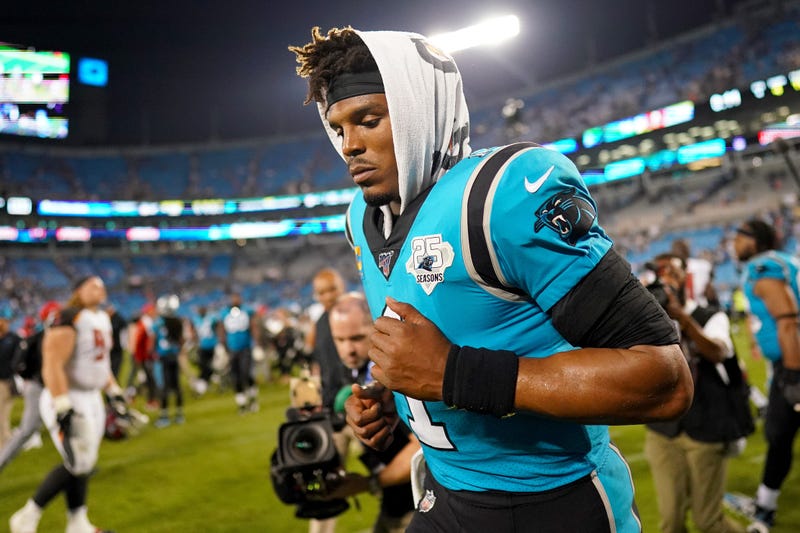 These are the games that quarterback Cam Newton and the Carolina Panthers always seem to find a way to win at home.

Despite playing poorly on offense for 90 percent of the game, the Panthers found themselves in the improbable position of being able to eek out a scant one-point win. All Carolina had to do was convert a fourth-and-1 at the 2-yard line with about 90 seconds left to play.

At the very least, a first down seemed a given as the Panthers only had to get to the 1. It’s what Newton is so special at doing.

But inexplicably, not only did the Panthers not score, but they didn’t get the first down, either. Tampa took over and escaped with a 20-14 win Thursday night at Bank of America Stadium.

Not converting seemed as farfetched as the 0-2 record Carolina now has. Both losses have come at home.

“You can’t blame them. They deserve better, the defense deserves better, and … we’ve just got to come up with more points and it starts with myself.”

Another unlikely aspect to Carolina losing is that Newton has now lost eight straight games as a starting quarterback dating back to last year.

It’s also the first time Tampa Bay (1-1) has won on the road with quarterback Jameis Winston starting since 2016.

Of course, it doesn’t help that Newton completed less than 50 percent of his passes going 25-for-51, while also losing a fumble.

He routinely missed wide-open receivers, or was just off target enough to where the receiver had to slow down and make adjustments. He was never on point.

However, it’s not as though the offensive line helped Newton out much, either. Newton was sacked three times and hit six other times.

There was also no running game to speak of as start tailback Christian McCaffrey managed just 37 yards on 16 carries.

The fact that everything was amiss is what’s so confusing to tight end Greg Olsen, who led the team with 110 yards receiving on six catches.

It’s not as if Carolina didn’t move the ball at times. The Panthers crossed midfield nine times.

Nonetheless, they didn’t score a touchdown, instead settling for four field goals.

Whatever the issues are on offense, they need to be fixed rather quickly if the Panthers are going to make a run for the playoffs.

Rivera said hope is not lost in the least little bit.

“It’s very frustrating,” he said. “To me, it’s frustrating when so many things go against us, and at the end of the day, it’s on me. I’ve got to get those things corrected.