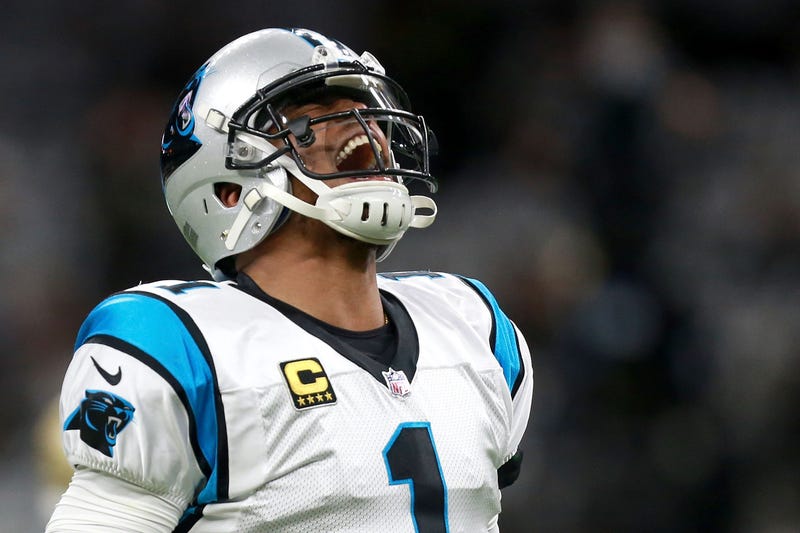 Cam Newton's time with the Carolina Panthers has come to an end, but that doesn't take away from the countless memories and plays he made on and off the field.

We asked you what your favorite/most memorable plays were during his time in Carolina to put together this Top 10 Cam Plays list.

We ranked them by the popularity in our Facebook/Twitter replies:

10. Cam Dunks on 'em
Newton has had a lot of memorable plays against the division-rival Falcons. This play is more recent. In Week 9 of the 2017 season, Newton took off from Atlanta's 18-yard line all the way to end zone and scored with an electrifying dunking touchdown.

Happy Halloween.Never forget the time Cam Newton went trick or treating on the Falcons as Michael Jordan.What a dunk. pic.twitter.com/1zxrRqPG7k

How can you forget Newton's first career rushing touchdown and Superman celebration?

Newton had already thrown two touchdowns to Smith Sr. in his debut and in the third quarter he showed the world what was to come with a diving touchdown.

He then did his first-ever Superman celebration and was then penalized for the first time.

In recognition of his efforts, the NFL tossed a 15y flag in Cam’s lap—his first ever rushing touchdown—for “using the ball as a prop”.Some rules have changed for the better. pic.twitter.com/UYjn4FnWAp

— John Ellis (@OnePantherPlace) February 1, 2020
8. Newton drags along Falcons for the first down

Even though the Panthers lost this game in 2015, Carolina was tied with the Atlanta Falcons in the first half and Newton had another one of his most memorable plays.

On third-and-8, Newton forced his way all the way to the first-down marker. In what looked like dozens of Falcons defenders trying to take down Newton, he ultimately was rewarded the first down.

Just take a look back:

I’m football depressed. I miss seeing my favorite player on the field. So I was watching highlight videos and came across this.How many Falcons does it take to stop a Cam Newton? #KeepPounding pic.twitter.com/gQEsBDR4SQ

In 2013, the Carolina Panthers were facing the division-rival Saints for the NFC South division title. New Orleans was up 13-10 with 28 seconds to play and then Newton connected with receiver Domenik Hixon for some magic.

It was the Panthers' first division title of three-straight with Newton at quarterback.

Cam Newton clinches his first NFC South title versus the Saints, with a strike to Domenik Hixon. I STILL REMEMBER THIS GAME. #KeepPounding pic.twitter.com/6Y17WYoM6I

During their record-breaking season in 2015, the Panthers were facing the reigning NFC Champion Seattle Seahawks, who were 4-0, in Week 6 of the regular season.

Carolina trailed 23-14 and Newton had back-to-back touchdown drives that included a miraculous 26-yard touchdown pass to a wide-open Olsen as the Panthers would go on to win, 27-23. Newton went 6-7 in 1:40 on the final drive.

The victory made Carolina the team to beat in the NFC and is still one of Newton's best comebacks.

The call is even better in Spanish:
5. 72-yard touchdown flip versus the Falcons

In his second-season during Week 14 of 2012, Newton showed off his dual-threat abilities against the Falcons.

Up 16-0 in the third quarter, Newton took off for 72 yards and then flipped his way into the end zone for a touchdown as Smith Sr. had a key block.

Then, he did his signature Superman pose in an unforgettable moment.

This was one of Cam's most iconic moments. At the beginning of his MVP season in 2015, Newton had Carolina in the end zone versus the Houston Texans in Week 2.

Newton dropped back before running towards the end zone in a quarterback draw and flipping over a Texans defender for the touchdown. It was a true Superman play.
3. NFC Championship touchdown dive

The Panthers were leading the Arizona Cardinals 27-7 in the third quarter of the NFC Championship and Newton decided to keep on running up the score with this electrifying play.

On first-and-10 in the red zone, Newton, who had already made huge plays on the same drive, raced towards the end zone in a quarterback sweep and flipped over Carolina center Ryan Kalil for the 12-yard touchdown.

The score would clinch the NFC title and a trip to Super Bowl 50.

In December 2017, Newton had one of his best trash-talking moments. The Panthers were in the end zone versus the Green Bay Packers and linebacker Clay Matthews shouted to his teammates that the Panthers were about to go for a wheel-route play.

Mic'ed up, Newton responded “You been watching film, huh? That’s cool. Watch this."

— Bleacher Report (@BleacherReport) December 18, 2019
1. Dancing all around the Patriots

Now for the most remembered play.

On Monday Night Football against the New England Patriots, the Panthers had the ball on third-and-7 midway through the third quarter tied at 10.

Then, Newton danced/scrambled all over the place avoiding three New England defenders to break away for a 14-yard first-down gain. Carolina went on to win the game.

That game also had the now-famous "Ice up, son!" line from Steve Smith Sr.