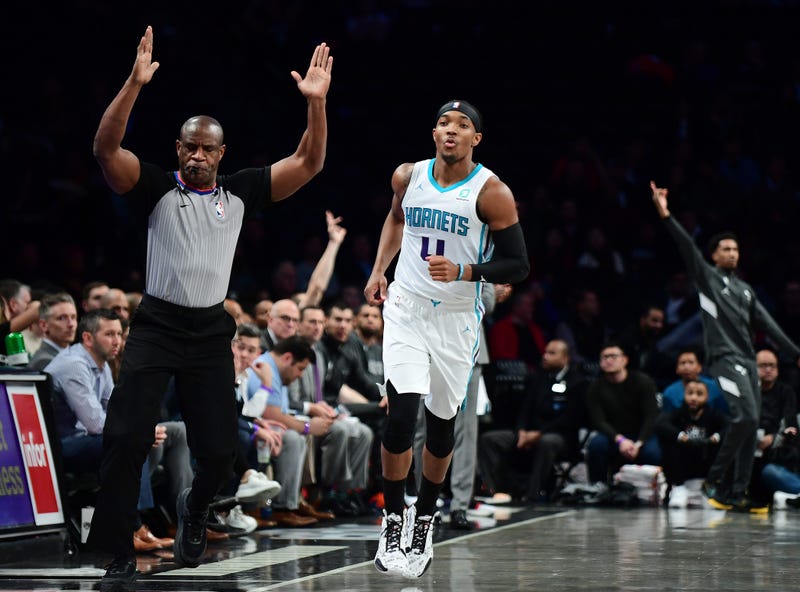 When asked who else would currently be in the NBA's Most Improved Player discussion, Charlotte Hornets head coach James Borrego couldn't think of anyone else aside from his point guard Devonte' Graham.

"He's got to be in the top two, three, right,?" Borrego said following Graham’s 33-point performance against Golden State on Dec. 4, when he tied the franchise record for most 3-pointers made in a game with 10.

Borrego later added, "It's got to be Graham, right?"

Graham has turned into a rising star essentially overnight.

In just his second season, the Raleigh native has increased his scoring from 4.7 points per game as a rookie to averaging 20 points in 27 games this season. Moreover, he’s averaging 7.6 assists and 3.7 rebounds, while shooting a robust 44 percent from beyond the arc.

His major jump in points is by far the biggest in scoring average by any NBA player this season and would be the fourth-largest scoring increase in NBA history if he continues this pace.

With All-Star Kemba Walker getting sent to Boston in a sign-and-trade deal during the offseason, Charlotte got guard Terry Rozier in return with the expectation of him replacing Walker at point guard.

Graham, 24, who spent 13 games in the G-League last season, was bound to see more playing time as Rozier's backup.

Following the team's first 10 games, Graham was averaging 17.9 points off the bench and fans were wanting him to be placed in the starting lineup.

"He understood the situation, and he was ready for the moment. He didn’t come to me and ask to start," Borrego said. "He knew this was the right move for our team, and he’s performed at a high level."

Ten games into the young season, Graham was eventually placed into the starting lineup alongside Rozier after forward Dwayne Bacon got injured.

Graham hasn’t looked back since.

To put an exclamation on it, Graham has averaged 26 points over his last seven games, which included a 40-point performance Wednesday at Brooklyn. He also became just the third player in NBA history to make at least 100 3-pointers in teh team’s first 27 games. The other two are James Harden and Stephen Curry.

"He’s a confident kid. He knows he’s got the green light," Borrego added. "We want him shooting the ball. Obviously, it’s opening up a lot for us as he shoots it."

Graham wasn't expected to make the jump to the NBA this quickly.

He stands a slight 6-foot-1 and had a lot of scouts doubting his athleticism. As a result, he was drafted in the second round last year.

Coming out of high school, Graham signed to play at Appalachian State. However, he tried to decommit after spending a year at Brewster Academy prep school in New Hampshire, where he had worked hard and improved his game.

But there was a big problem.

Capel was eventually fired for his team’s poor performance and Graham was then released from his commitment.

That was a very big deal.

Because he could go anywhere he wanted and because his game had improved drastically, Graham wound up signing with Kansas, where he wound up becoming the Big 12 Player of the Year and an All-American.

After spending a year traveling back-and-forth between Charlotte and the minor league team in Greensboro, Graham looks as though he’s going to be a fixture for the Hornets.

And teams have definitely taken notice of Graham.

When Graham has the ball, teams rush at him defensively and are trying to trap him to force Graham to pass the ball.

Yet, he continues to perform well.

“I’ve always had confidence in myself. It just keeps growing when I have games like this and just learning more and watching film," Graham said. "I get a lot of confidence from watching film and then noticing it in the games. It’s more than just doing stuff on the court, it’s a lot of stuff off the court.”

Graham has had five or more 3-pointers in seven games this season (the fifth-most in the NBA) and has scored 30 or more points three times, including his career-high of 40 against Brooklyn.

"This summer, I worked a lot off the pick-and-roll and off the ball and spot-up shooting to increase my range," Graham told NBA TV. "I've got to give my coaching staff a lot of credit and putting in that work."

"I always watched them. Kemba's aggressiveness, his heart and he didn’t care about being the smallest guy on the court," Graham told Kyle Bailey on WFNZ. "(Parker), the way his IQ and he knows the game and what plays to run, winning, momentum, who to get the ball to and I tried to take all of those things."

Not only has Graham helped the fans of Charlotte feel a little better about the loss of Walker, but he's already beginning to hear talks about being a possible All-Star.

"His one skill that I always recognized that he had is his pace," Walker said. "His pace is what is allowing him to really, really play well right now. That's something you don't see in a young guy like that, especially from me when I was his age. It's working out and he's reading the game so well and whenever he has opportunities he's just knocking his shots down. He's a really efficient player."

The Hornets are getting a great bargain with Graham as he makes a mere $1.4 million this season and just $1.7 million next year. But a contract extension at the end of this season could easily happen should Graham keep up his present pace.

The Hornets may have found a star quicker than anyone would've guessed, and he may soon have the award Most Improved Player alongside his name.

"I'm just gonna keep playing the way I'm playing and at the end of the day, if that’s what I achieve, I'd be blessed to have that award," Graham said.