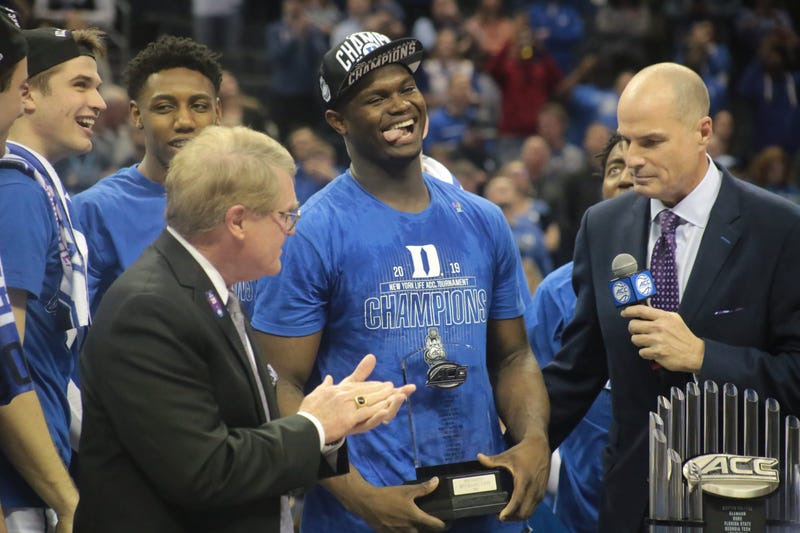 Not having freshman forward Zion Williamson for five games over the last month, Duke (29-5) had lost three games in his absence (two to North Carolina) and barely eked out a win over Wake Forest and Syracuse.

Seeded No. 3 in the tournament, questions remained at whether Williamson would be fully healthy and whether chemistry could be built quick enough again to put together a strong tournament showing.

Duke didn't miss a beat, sweeping through the tournament against Syracuse, UNC and finally topping it off with a 73-63 win over Florida State in the championship game to win their record 21st ACC Tournament title.

"It's an honor for us to win," Duke coach Mike Krzyzewski said. "This is the best conference, especially this year, and I'm proud of my guys. They beat three outstanding opponents, and tonight was a physical, really hard-fought defensive game and our guys played good defense again."

Even with a horrendous performance shooting from the 3-point line in all three games, the Blue Devils were led by dominant performances from Williamson, R.J. Barrett and Tre Jones.

Williamson was named the tournament's Most Valuable Player after putting up 21 points in the title game and totaling 81 points and 30 rebounds on 33-44 shooting from the field in the three games.

Alongside Williamson on the ACC Tournament first team was Barrett, and Jones made the second-team after scoring 18 points against Florida State.

Kentucky losing in the semifinals to Tennessee in the SEC Tournament now leaves the possibility of three ACC teams in Duke, Virginia and UNC being ranked as a No. 1 seed in the NCAA Tournament.

Only one conference has ever accomplished the feat of having three teams as a No. 1 seed. The Big East in 2009.

"I hope that we're all rewarded -- I shouldn't say rewarded. I hope we get the due that we should get for that level of achievement and because the league has achieved a lot," Krzyzewski added.

The Blue Devils are expected to be a No. 1 seed in the NCAA Tournament and should be feared with Williamson back to dominating, Barrett proving why he's a future NBA top-five draft pick and Jones becoming a scarier offensive threat each game.

"When Tre's doing that, they're really playing off him, so when he's able to score like that, it definitely opens up the floor for everyone else," Barrett said. "He has that ability. So for him to showcase it on a big stage was huge."

If there are any glaring weaknesses entering the NCAA Tournament, it's inconsistent 3-point shooting and lack of depth off the bench.

"I really think the level of relationships that we have with this group exceeds most of the teams that have been young for us," Krzyzewski said. Not that they (Former teams) were bad, but these guys give you an opportunity to do that. They're very secure in who they are and they only care about winning."

Duke has been upset in the NCAA Tournament notably before, but with a team of possible future NBA players only getting better and a healthy Marques Bolden still possibly returning, the Blue Devils are the odds on favorite to win it all.

"We're freshmen and you think you're going to come in and dominate," Williamson said. "But for us to actually come this far and win says a lot about how much we want to win."