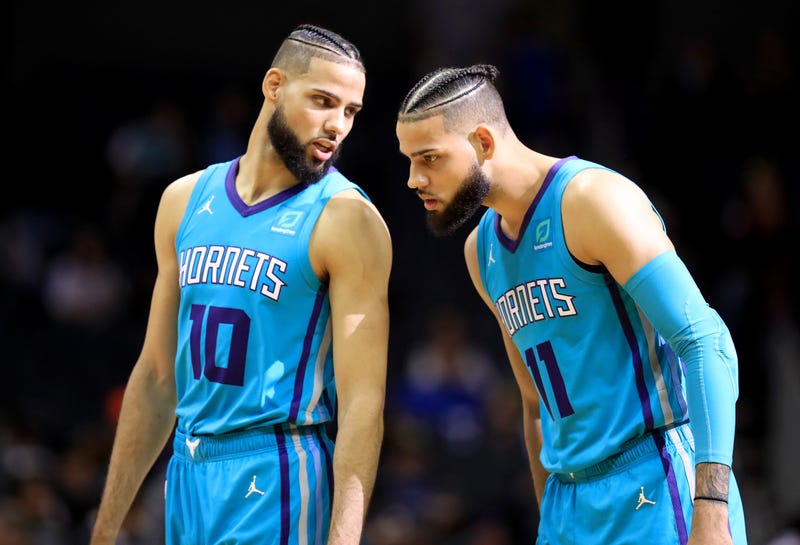 Rookie guards Cody and Caleb Martin weren't expected to make any type of impact for the Charlotte Hornets this season.

The twins declared for the NBA Draft after their senior seasons at Nevada, and Cody was drafted 36th overall in the second round, while Caleb went undrafted, before signing a partially guaranteed contract with the Hornets.

The two look almost identical (they're actually fraternal twins) but in college, Cody was recognized more as a defensive player, with Caleb being more of a scorer.

Due to injuries, buyouts of veterans and a full-on youth movement taking place in Charlotte, the Martin twins have found themselves from being with the G-League affiliate Greensboro Swarm, to now playing a pivotal role in Charlotte during the final six weeks of the season.

The two have made the biggest impact on defense, playing a large part in the Hornets ranking seventh in the league in defensive rating over the last 10 games.

"I think it's just paying attention to detail," Cody said. "A lot of that is communication and taking pride in what we're doing and understanding that we gotta play hard on both ends."

Over the past two months, the Hornets bought out the contracts of veterans Marvin Williams and Michael Kidd-Gilchrist, haven’t played guard Nicolas Batum in 16 games and lost guard Malik Monk to an indefinite drug suspension.

The Martin twins were quickly elevated to becoming key contributors during the Hornets' final stretch of the season due to all the roster moves.

Cody has spent the majority of the season in Charlotte, appearing in just five games for the Swarm and playing in 45 games for the Hornets.

Caleb spent the majority of his season in Greensboro, appearing in 28 games.

“Greensboro has helped me just find ways to move through the offense and finding baskets here and there,” Caleb said. “I’m just figuring out how to do the best of both worlds right now to throw some offense in there and get it when I can.”

Caleb averaged 21.3 points per game with the Swarm but quickly realized in the NBA his defense would be more important to earn playing time.

"The notion of me coming out of college was that I just shot and played offense," Caleb said on Wilson and Parcell. "I just wanted to come in and show guys I can do more than just shoot the ball and try and guard and just be like my brother and do all the other little things too."

Caleb was recalled on Feb. 8, after Williams and Kidd-Gilchrist were released. From that point on, their playing time increased substantially.

Caleb has averaged almost 18 minutes per game in the last 11 games including a career-high 26 versus the San Antonio Spurs, and Cody made his second-career start that same night, scoring a career-high 13 points on 6-of-8 shooting.

"I know everything he is going to do, vice versa," Cody said. "It's a lot of fun and we are blessed to be able to do this and to be able to have played basically our whole life together, it means a lot. I think it shows it when we are out there on the court that we know what each other’s doing."

In a league that has become offensive driven, Charlotte head coach James Borrego preached building a strong defense ahead of the season.

When the Hornets held two of the league's top teams in Milwaukee and Toronto to under 100 points in back-to-back games a week ago, the Martins were key factors.

"They affect the entire group with how hard they play, the passion they play with, the resiliency and the defense," Borrego said. "They’re core culture guys for us. I think they’re keepers and they’re going to just keep getting better."

That energy has brought a spark into the young locker room that keeps the team in a positive mood when not every game goes their way.

“They’ve been doing it since they’ve been up here playing," guard Devonte' Graham said. "I feel like every game they come in with that spark, getting steals, offensive rebounds, fast-break lobs, and-ones, stuff like that. So you definitely have to give them credit for sparking that run and getting us going."

The passion and resiliency have been noticeable on the stat sheet as well.

Cody ranks 13th in the NBA in charges drawn with 0.29 per game and Caleb has had a positive plus/minus rating in six of the last 10 games he’s played.

"I think that we complement whoever we play with really well because we go out there and just try to bring a lot of energy into our job and just basically doing whatever is needed from us to win and being willing to do that every night," Cody said.

"Defense is the biggest thing for me to stay on the court right now," Caleb added. "I'm not too worried about scoring right now. Scoring won't be a problem for me but it's doing all the little things like learning the rotation, the reads, learning how to play with other guys and being a positive impact down the stretch, whether it's diving on a loose ball or grabbing the rebound."

The wins will take time with Charlotte being such a young team but the Hornets seem to have found unpolished gems in the Martin twins.