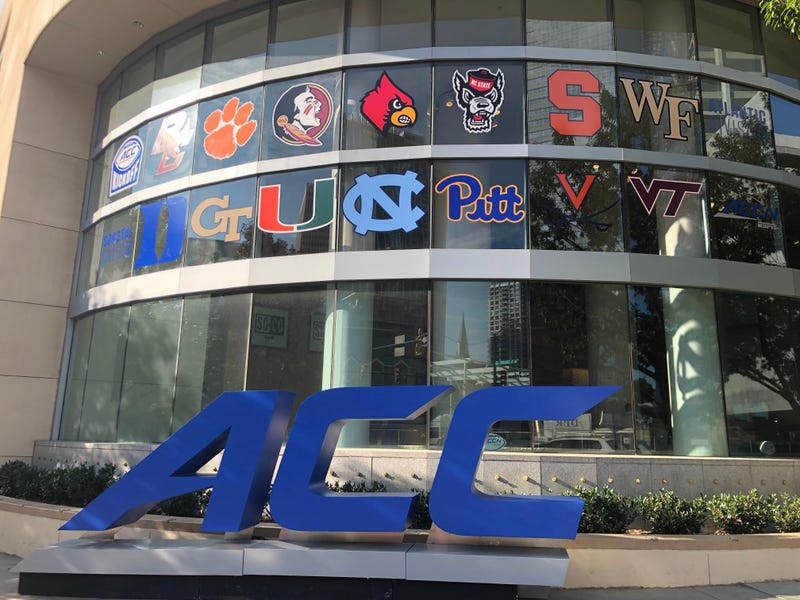 The ACC Kickoff returned to Charlotte this week and Clemson was the talk of the town, as they should be.

The Tigers have won the last four ACC title games.

On Day One, the Atlantic Division coaches and players held press conferences with the Coastal Division taking over Day Two.

Every team aside from the Virginia Cavaliers have won the Coastal over the last six years.

WFNZ was there for all the action and welcomed many coaches and players on air.

Take a look at some of the most notable quotes, moments and interviews.

Interview: https://wfnz.radio.com/blogs/clubhouse-kyle-bailey/clubhouse-kyle-bailey...
"We've had eight 10-plus winning seasons in a row and have been very consistent. The reason for that is we start over. You heard these guys talk about it. Truly, we don't carry everything over. It's a new team, there are new challenges. You got to redevelop the leadership, reinstall the core values." -Swinney

"I think it comes -- I mean, it comes just from the success. Tasting the success, being able to continue to strive to get to the top of the mount, top of the totem pole." -Tanner Muse on what continues to drive them.

Simpson continued to fuel the Clemson-Alabama rivalry with a response to Alabama head coach Nick Saban and linebacker Dylan Moses saying they weren't prepared for the Tigers and they're still the better team.

Simpson also made more headlines as he decided to take matters into his own hands with quarterback Trevor Lawrence, not in attendance.

Doeren joined The Clubhouse to discuss the team's replacement at quarterback with Ryan Finley no longer around. Junior transfer Bailey Hockman from Florida State and redshirt freshman Dennis Leary are the two competing for the starting quarterback spot.

"It would be great to be able to give you a timeline. I think when it shows itself to us, we'll know. There's a lot of data that we accumulate on a day-to-day basis when we start practice from completion rate to touchdown interceptions to who can stay on the field, create the most first downs, to our red zone opportunities, what happens down there, do they score, kick a field goal, turn it over, two-minute drills." -Doeren on naming a starting QB.

Doeren also spoke about now having alcohol at home games.

"Selfishly, absolutely, I would love to see everybody staying in there because it helps us win. At the end of the day I think everybody would agree that's our job here, is to win as many games as we can and do it right the right way, so our fans can enjoy it and in my opinion be a part of it because that's a strength for us."

"I think coach Doeren has a standard, and that standard is raised every day. He set the bar high. He's shown us also what it's like to be a man, handle your business. I think that's reflected on the field, as well."

Clawson joined The Clubhouse to discuss the team's quarterback situation and the expectations with many returners. Sophomore Sam Hartman and redshirt junior Jamie Newman are competing for the starting job. Both were starters at one point last season.

"I have great confidence in both of them. Historically, we have not gotten through a season there healthy at the quarterback position. So as much as I'm worried about who the starter is, I'm also concerned with who's going to be our third, who is our fourth. We have to make sure we're continuing to develop the position." -Clawson.

Carney joined Wilson & Parcell to close out the midday hour.

Interview: https://wfnz.radio.com/blogs/nick-wilson-and-josh-parcell/cade-carney-it...
"The good thing about the two quarterbacks is I've been telling everyone this year, they both have a mean handoff. They do a great job of putting that ball in my gut. So it makes it easy for me." -Carney.

Cutcliffe joined Kyle on The Clubhouse to talk about replacing Daniel Jones at quarterback with Harris and facing Alabama in Week One.

The ACC Coastal can have any team 1-7 win the division, but @DukeFOOTBALL head coach David Cutcliffe believes the league as a whole is better than it's ever been. #ACCKickoff pic.twitter.com/niHb1jqoFa

"I'm definitely very confident in my abilities to pass. I think our offensive game will continue to kind of thrive on a nice balanced approach" -Harris

Brown joined The Clubhouse and discussed his thoughts on the rapid increase of the Transfer Portal and bringing back title expectations to Carolina.

"We want to come back and get it back like it was. But even better, we'd love nothing more than to win a national championship here." -Brown.

Brown added that UNC expects to run the ball a lot and not use the "Air Raid."

He went on to say that the Tar Heels biggest question this summer was to figure out who will be the team's starting quarterback.

Sam Howell, Cade Fortin and Jace Ruder are competing for the job.

"He brought an excitement to the team that I ha'n't seen before, not just only on the team but in the community. People are talking about Carolina football. That's been really special to be a part of right now." -Heck.

Fuente joined The Clubhouse to discuss how Virginia Tech hopes to bounce back and who the starting quarterback will be.

Joining us now is @HokiesFB head coach Justin Fuente on the @ClubhouseKB with @KyleBaileyWFNZEvery Virginia Tech game will be broadcasted live on WFNZ pic.twitter.com/41CDIyLpus

"Part of that deal is I have guys on our roster, one of whom you alluded to (Oregon transfer Braxton Burmeister), that plays quarterback that I don't know yet if he's going to be eligible or not. I promised those guys opportunities to compete for the job. I don't think it would be wise of me to close the job before I know who's eligible to compete for it."

Interview with Floyd: https://wfnz.radio.com/blogs/clubhouse-kyle-bailey/reggie-floyd-previews...
"This year the chemistry, the bond that we have, all the mental issues where people were second guesting their techniques, things like that, all have changed. Now it's just a great relationship between everybody that's on the defense." -Floyd.

ACC commissioner John Swofford hosted his annual forum with the new ACC Network set to launch on August 22 being the main topic.

A documentary called "The Class That Saved Coach K" and Clemson's perfect 2018 season will highlight the network's productions being released.

Former App State and current Louisville head coach Scott Satterfield will have his first season at Louisville be documented as well.

"The ACC Network will give our schools a national platform to showcase our campuses, our coaches, our student-athletes. This will result in 24/7 ACC

programming, increased exposure for our athletic programs, our student-athletes, our entire universities, and their communities."

ACC Commissioner John Swofford says if you don't have it and want the ACC Network then call your TV carrier and demand that you want it while being passionate telling them.He also says that the ACC expects to be in Charlotte for "A very long time." pic.twitter.com/VReuvAvv8j