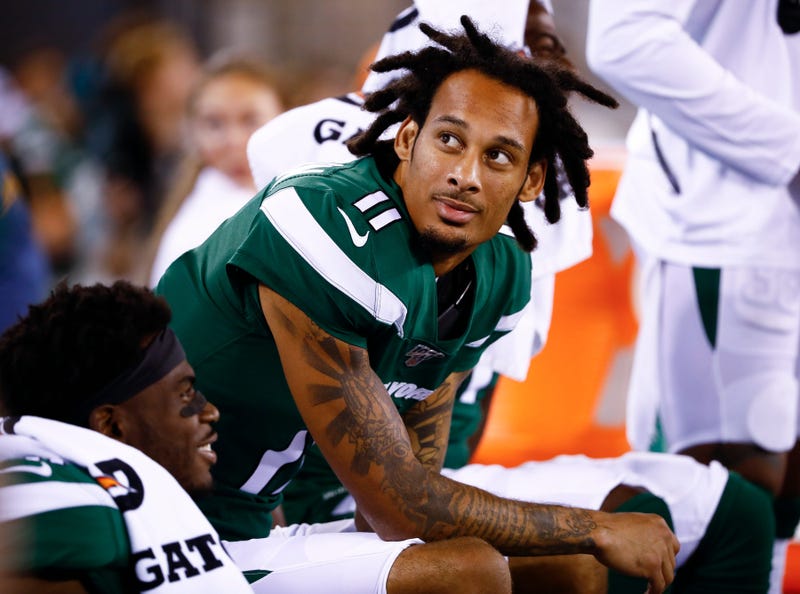 Fresh starts and facing adversity has been a staple for wide receiver Robby Anderson throughout his football career.

A tattoo on his neck stating "No pain, no gain," has represented his career fittingly.

When Anderson, 26, saw the opportunity to reunite with his former college head coach Matt Rhule, it became a no-brainer to sign with the Carolina Panthers this offseason, on a two-year, $20 million deal.

The opportunity signaled another new chapter in his career that has had its struggles including an academic suspension as a junior in college and two arrests during his NFL career.

"I've just matured in every way possible," Anderson said. "I was a young man then and now I feel like I'm a man. Looking back at it I feel like everything happens for a reason."

Anderson broke out onto the college scene in 2013 when Rhule was hired at Temple and switched Anderson's position from a defensive back to a wide receiver.

Anderson was originally a wide receiver before arriving at Temple.

After a strong sophomore season, Anderson was deemed academically ineligible as a junior and missed all of 2014.

"I wasn't handling my business in the classroom and was academically suspended," Anderson said. "Coach Rhule fought hard for a whole year and finally had them allow me to come back sooner and I had to work hard and raise my GPA and get eligible to play senior year."

The second chance that Rhule gave Anderson led to a breakout season and ultimately gave him the chance to play in the NFL.

Not only did he appeal of Rhule in Carolina stand out, but his relationship with Carolina's two new quarterbacks Teddy Bridgewater and P.J. Walker made the decision even easier.

"P.J. is one of my closest friends. We came to Temple my redshirt sophomore year and we broke out together. His first game, he came off the bench and let a bomb go and that was my first big play. Since then we took off," Anderson recalled. "He knows me as a player but he knows to show me things to make me better."

Bridgewater was Anderson's teammate for a short time with the New York Jets in 2018, making the decision a simple one.

"Winning is in his (Rhule) blood," Anderson said. "There wasn't much he had to sell me on. When I saw Teddy (Bridgewater) signed, it was like the icing on the cake to want to be a Panther."

Anderson signed with the Jets as an undrafted free agent in 2016, worked his way onto the 53-man roster and he would become one of the league's top deep-threats in his first four seasons.

Anderson has 11 career touchdowns of at least 30 yards or more and according to NFL's Next Gen Stats, he ranked third in the league in 2018 in targeted air yards with 16.5 and seventh last season with 15.3.

Signing with Carolina will pair Anderson with receivers D.J. Moore, Curtis Samuel, and running back Christian McCaffrey to create a new style of offense under first-year offensive coordinator Joe Brady.

"I think it's going to mesh perfectly," Anderson said. "I think D.J. Moore is a great receiver and is underrated. He is gifted in what he can do after the catch. I really like Curtis (Samuel.) He can make a small play into a big play and with my speed I think we're going to complement each other very well. And with Christian (McCaffrey), he's the best running back in the NFL."

Despite all the changes taking place this offseason for the Panthers, Anderson is used to having to grind and work his way through tough situations.

Things will be different, including his addition, but he doesn't see this team as a rebuilding one.

"Typically when a new head coach comes into a team it's hit rock bottom. I don't feel like the team was left in bad hands," Anderson said. "This team has been a contending team. Last year was just a bad year but when you look at this roster it's a very good roster with players that know how to play football and want to win. It's already a solid foundation there and a new head coach that's won at the college level and been in the type of situations that has built things up. I think there is a good direction."

Anderson will once again get a new fresh start. This time with a lot more experience on a team going through a lot of change.

"I've always liked the Panthers colors," Anderson said. "I also believe the NFC South has some of the best teams in the NFL and the best receivers to compete against."

Carolina will be one of five teams to hold their first team meeting on Monday via Zoom. Before the coronavirus, the team was originally supposed to begin OTAs earlier than most teams due to a new head coach.