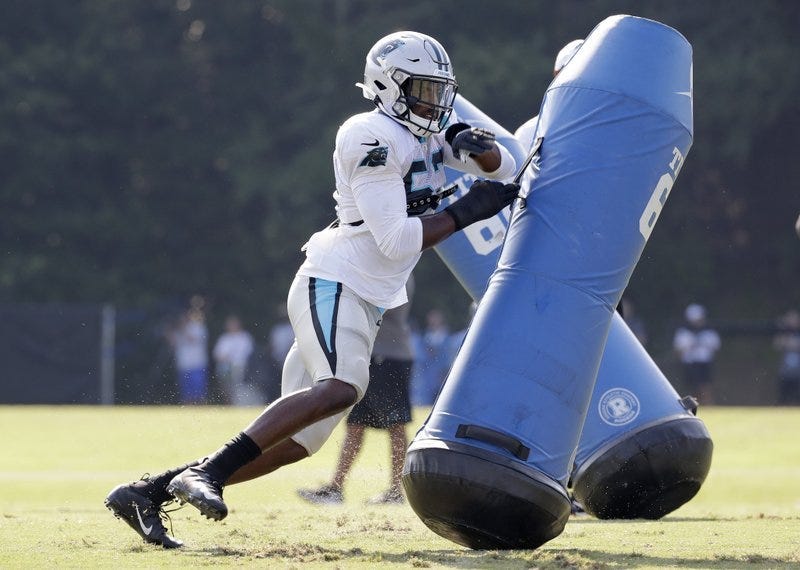 The first-round draft pick from Florida State was impressive in his NFL preseason debut with two sacks in less than two quarters of action against the Chicago Bears on Thursday night. And he caught the eye of his new Carolina teammates and coach Ron Rivera even further when he celebrated with two Spiderman poses that would test the flexibility of even the most agile yoga instructors.

It even left quarterback Cam Newton playfully trying to mimic the move on the Carolina sideline.

“After I did the pose a lot of my teammates tried to figure out how I did it,” Burns said with a laugh Sunday. “Cam was on the sideline trying to do it. But no one else can do it except for me.”

When asked if Newton came close to duplicating his pose, Burns laughed and said, “No. The next time you get him for an interview, make him try to do it.”

Newton knows a thing or two about superhero poses.

He regularly celebrates his touchdowns by striking the Superman pose and pretending to slowly rip open his jersey to reveal an imaginary “S″ on his chest. And it was Newton who nicknamed the team’s top defensive player, linebacker Luke Kuechly “Captain America,” although the mild-mannered Kuechly has never been one for posing after big plays.

The Panthers can use all of the superheroes — and playmakers — they can get after a disappointing 7-9 season in 2018 in which they missed the playoffs.

The defense was 27th in the league in sacks last year, but help may be on the way.

Burns and fellow outside linebacker Marquis Haynes, an undrafted rookie in 2018, both impressed Rivera, combining for four sacks in the win over the Bears as the new 3-4 defensive scheme received rave reviews. Both players started against the Bears with Carolina resting all of its normal defensive starters in the preseason opener.

“They are different style players where Marquis is a powerful, explosive guy and Brian is very quick and long,” Rivera said. “So they have a different skillset.”

Rivera previously said he liked the three-man rotation at outside linebacker of Burns, Mario Addison and Bruce Irvin. But he said with how well Haynes played he’s now thinking it might be a four-man rotation.

“We have a tremendous gift; God has blessed us with the speed,” Burns said of himself and Haynes. “It’s like a little tandem we got going on. He can definitely be a part of that rotation because we need fresh pass rushers in the game.”

Burns called it a good start to his NFL career, but said he there are bigger and better things ahead.

And more Spiderman poses, too.

“Just stayed tuned, there is a lot more to come,” Burns said.

The Panthers certainly hope so.

NOTES: Defensive end Kawann Short left practice early Sunday after getting kicked in the shin. Rivera offered no timetable on his return, saying “we took him off and wanted to ice it so it didn’t swell up.” ... The Panthers will host joint practices with the Buffalo Bills on Tuesday and Wednesday at Wofford College.