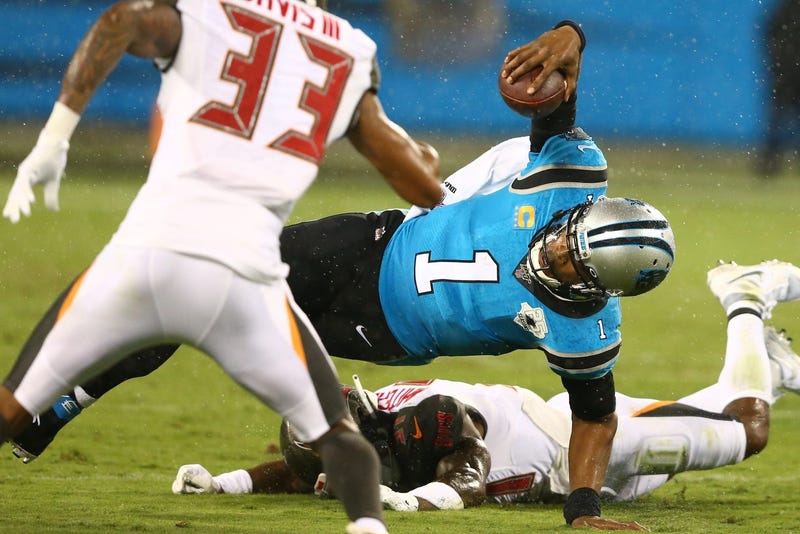 Thursday night's loss to the Tampa Bay Buccaneers may mean more than just an 0-2 start for the Carolina Panthers.

It may have signaled the end of an era.

The Cam Newton known as "Superman" may be dead.
Faced with a fourth-and-1 at the Tampa Bay 2, and trailing 20-14 with 1:28 left on the clock, Panthers head coach Ron Rivera decided to go with his 210-pound running back, Christian McCaffrey, to grind out a yard to move the chains with the game on the line.

McCaffrey made a diving and valiant effort, but he came up short.

And where was the former league MVP - who has 58 career rushing touchdowns - and a big 6-foot-5 frame?

Flanked out as a tight end on a trick play.

The review from the officials to see if McCaffrey had gotten that yard came to a bitter end, leaving the Panthers with a lot of question marks and pointed fingers.

Despite not having his number called, Newton took responsibility for those concerns and welcomed those judgements.

"It's a lack of execution offensively," Newton said. "We didn't hold up our end of the bargain. All fingers are just pointing back to me - specifically on offense."

He has now gone four straight games without a passing touchdown and his last win as a starter came against this same Bucs team in Week 9 in 2018. He’s also lost four straight at home.

All this is forcing questions about the health of Newton's shoulder and whether or not it’s fully healed from off-season surgery to linger.

Newton had continued struggles against the Bucs throwing to the right side of the field - overthrowing Jarius Wright several times. All told, he wildly missed on 15 targets.

Rivera quickly shot that down.

"There is no issue with his shoulder,” he said. “He threw the deep ball today...threw it a couple times."

With Newton's foot injury in the team's third preseason game, many are still wondering if that also might have led to McCaffrey getting the ball with the game on the line Thursday night instead of Newton.

Newton was seen limping and walking gingerly a couple of times.

Rivera, yet again, put that to rest.

"Don't even worry about the foot,” he said. “The foot had nothing to do with it."

Newton backed up his coach saying that he would have been healthy enough to put his body on the line for the conversion.

"I feel okay,” he said. “You're not going to hear any type of reasons why tonight didn't go as planned. I have to be better. No matter what physical condition I am in, no matter what - foot, shoulder. I didn't get the job done tonight."

Through two games, Newton has been sacked six times, and has five rushing attempts for minus-2 yards.

Newton ran his way to a league MVP and a Super Bowl appearance just five seasons ago.

So, the question is: Can this Panthers team win without Cam Newton's legs?

"It's my job to execute, plain and simple,” Newton said. “Whatever play is called. It didn't come down to me not running the football.

"It's time for me to look at myself in the mirror and do some real soul searching because I had opportunities tonight and I didn't get it done."

Because his coaches aren't letting him.

Because maybe he can't.