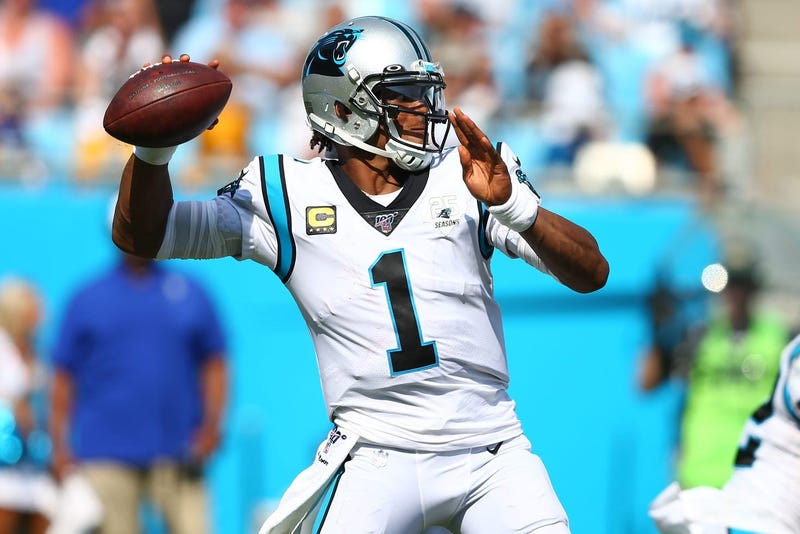 It seemed we were never going to see "Superman" anymore.

And when Newton was not present at practice on Tuesday as the team prepared for the Arizona Cardinals, the panic button went off.

"Cam Newton played his last down as a Carolina Panther in 2019," Michael Vick said on Fox.

All this despite the Panthers saying Newton simply reaggravated a foot sprain he suffered in Week 3 of the preseason against New England.

With several of the elite quarterbacks in the NFL, such as Drew Brees and Ben Roethlisberger, getting hurt in Week 2 in the regular season, and other quarterbacks like Andrew Luck retiring and Eli Manning being benched, it became the easy thing to say that Newton's time as an NFL quarterback had come to a close, as well.

But three former Panthers quarterbacks huddled up this week to rebuke those claims.

"I'm not writing the obituary just yet," former Panthers QB Steve Beuerlein, who played for Carolina from 1996-2000, said this week on "Wilson & Parcell." "I don't think it's over yet. I'm hoping Cam can get down and get himself healthy enough to play at a high level and get this team back to where they're playing good football and a run at the playoffs."

Unfortunately for the Panthers, they haven't seen good football out of Newton - and wins - since the middle of 2018.

Newton has lost eight straight starts for Carolina and hasn't had a passing touchdown since a Week 13 loss in 2018 to Tampa Bay. It’s also a game in which he also threw four interceptions.

Newton, who is known for his prowess with his legs running for big yards and touchdowns, also hasn't found the end zone on the ground since last October.

Jake Delhomme, who directed this Panthers offense for seven seasons from 2003-2009, and now is the team's radio color analyst, says every quarterback can tell when it's time to hang them up, and when looking at Cam, he doesn't see that.
"My deal was a little different. My play was horrendous," Delhomme told "Wilson & Parcell" on Tuesday. "My play dictated that I had to be released. I was terrible. Whereas with Cam, we've had two games - one against the defending NFC Champions, where we left a win on the field, and last Thursday against Tampa. I still think it's very early in the season. … I think we need to pump the breaks on that."
With lingering questions about Newton's ability to throw the ball downfield with his surgically repaired throwing shoulder, Delhomme referenced the throws Newton made to Curtis Samuel and a comeback route to D.J. Moore in the waning minutes of the Bucs game as rebuttals to those concerns.

But Delhomme did admit that Newton not running, especially on the team's critical fourth-down play at the end of the game near the goal line, did send off some red flags.

"Maybe there was an issue from the Patriot preseason game,” he said. “I would assume that a Sunday game, and right back on a Thursday night game back-to-back, maybe something could have aggravated it. Maybe that's why we're not seeing him run as much."Newton has minus-2 rushing yards in two games this season.

Carolina general manager Marty Hurney said on Tuesday that Newton is in a walking boot to protect his foot. He was placed in the same boot after initially injuring it against the Patriots.

"That could be something that's aggravating him with his foot, because obviously with his mobility, according to the record books, his mobility is probably the greatest of any quarterback we've ever seen," Delhomme said.

So, is Newton indeed salvageable?

His former backup, Derek Anderson, told "The Mac Attack" this week that he is and blames Newton's struggles to the former MVP just being “banged up.”

"In eight seasons, he's pushed his body to the max,” Anderson said. “He's played through a million different injuries over the course of that time. It takes a toll."

Anderson said he's aching for Newton because he knows the type of competitor he is after having shared a locker next to him for seven seasons.

"I understand his frustrations. It's frustrating to me because I know how much he puts into it," Anderson said.

Anderson feels like Newton's struggles have been from the lack of having a preseason. He only played seven snaps over the course of four games. Anderson also said he thinks Newton not getting any practice time during the offseason also has taken a toll on his play, but not necessarily Cam losing any of his athletic ability.

"I watched the game the other day. He struggled,” Anderson said. “But everything is not exactly his fault. It takes every single guy on the football field time to mesh and come together. He didn't participate every single day, didn't play in the preseason. We're still working through some kinks, I think, as we go into the season."

Delhomme said Kyle Allen starting this week may not be the worst thing in the world for the long-term health and success of Newton and the Panthers.

"If there is something, hopefully a little rest can help it," he said.

"I think they've done the right thing with him in trying to make sure he's ready to go,” he said. “It's about reps and getting into it. I think he's going to get things cleaned up and will be throwing the ball accurately and will be moving around like I know he can."