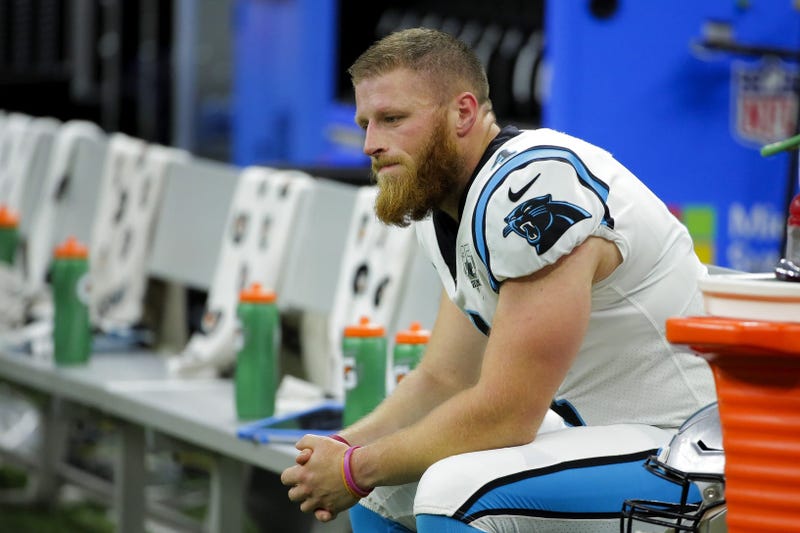 Along with it, Carolina's playoff chances may have faded away as well.

With just three seconds left on the clock, Slye - who missed two extra points and a potential go-ahead 28 yard field goal two minutes previously, could do nothing but watch his Saints counterpart, Will Lutz, do what he couldn't and kick his team to victory, 34-31.
As Slye left the field to head to the locker room, quarterback Kyle Allen rushed over and embraced his kicker and later in the locker room told reporters that it wasn't his fault and that he'd be back to making big kicks for this Panthers team in the near future.

"I told him that's going to happen...especially in a kicker's career," Allen added. "You see it from every kicker. People go through slumps sometimes. People miss kicks. It's not a big deal. We just need to pick it up. If other people are slacking, other people have to pick it up. It's a team game. I told him that there were numerous other things in the game that could have went other ways where if we would have made plays on offense...the defense would have made plays...he wouldn't have been put in that position."

Slye may have had his solitude in the game's final minutes to wallow in shame, but his teammates were there to pick him up.

For Allen, he more so than anyone on that team had the insight to lend Slye about personal responsibility dealing with a loss.

But apparently the quarterback of the team defending his kicker wasn't good enough for Panther fans.

All over social media on Sunday, a large portion of the fans in black and blue came together in unison to put the loss all on the right leg of the second-year kicker out of Virginia Tech.

Slye didn't blame them for that either.

Slye's three misses equaled out to five points left off the board for the Cats, and in a three point game won off the leg of the opposing kicker, the looking glass and pointed fingers went back to Slye.

I guess we found something Panthers fans can agree upon on social media besides wanting to fire Ron Rivera.

Blaming Joey Slye (or any kicker for that matter) is misplaced.

More so than that.

After Ron Rivera challenged a no-call on a pass interference penalty by the Saints, the Panthers had the ball inside the New Orleans three yard line with the game tied up at 31 in the game's final minutes before Slye's kick.

What did they do with that opportunity?

A 1-yard loss, an incompletion, and a sack.

If your team can't score a touchdown - especially one three yards away with four chances to do so - you weren't good enough to win the game.

And even if Slye made the deciding field goal, the Saints still were left with just under two minutes in the game to take down the field to get points on the board.

Which shouldn't have happened.

With national reports of Ron Rivera's future in doubt at the end of the year, his defense - the one that he calls - allowed 400+ yards to their NFC South foes and let Drew Brees pick them apart to the tune of 311 yards on 30-of-39 and three touchdowns.
Receiver Michael Thomas went over 100 yards on 10 catches, and tight end Jared Cook also added 99 yards receiving and a score.
And running back Latavius Murray busted through this Panthers run defense early in the game for the opening 26-yard touchdown with former Panthers training camp body Jason Vander Laan making the key block to spring Murray.

All Slye wants moving forward is another chance to redeem himself.

"I believe they know who I am as a person and how I work, and they know I'll get right back out there this week," he said.

The question will be - if Slye does get another chance to win a game and he does...will Panthers fans give credit to their kicker the same way they crucified him for missing a kick?

My guess is no.

No one in that locker room postgame on Sunday put all the blame on their kicker.

So why should you?