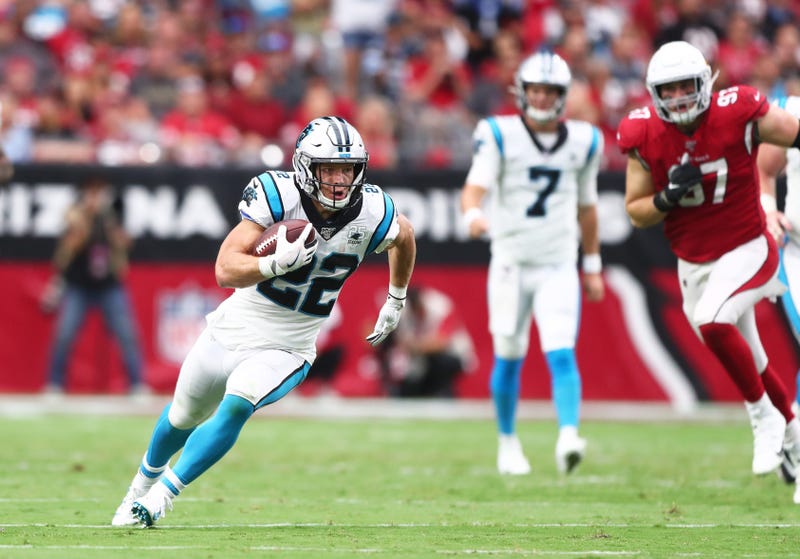 The Carolina Panthers grabbed a 38-20 win over the Arizona Cardinals in Week 3 to get their first win of the season.

Here are the top five plays that propelled the Panthers to the victory:

5 – Arizona 1st-and-10 at Carolina 35 with 3:57 left in the 3rd quarter: This is a play that you'll forget as a Panther fan but will have Cardinals fans boiling in Arizona. Trailing 21-17, but driving into Carolina territory, quarterback Kyler Murray and receiver Trent Sherfield fail to connect for a clear go-ahead touchdown as Murray’s pass sailed just a tad high and Sherfield wasn’t able to make the grab as it went through his outstretched hands. Instead, the Cardinals were forced to settle for a field goal.
4 – Carolina 2nd-and-8 at Arizona 39 with 8:56 left in the 3rd quarter: A lot of what Jarius Wright did in Sunday's victory won't show up in the box score, but this 33-yard catch certainly will. Trailing 17-14 midway through the third quarter, quarterback Kyle Allen found Wright deep down the left sideline for a 33-yard gain to the Cardinals 6. That set up a touchdown pass from Allen to tight end Greg Olsen. The Cardinals would never regain the lead in the game. © Joe Camporeale

3 – Carolina 3rd-and-goal at Arizona 3 with 13:37 left in the 4th quarter: Blessed with a short field after Donte Jackson's first interception of the season, and after Curtis Samuel's toe-tap reception to get the Panthers to the Cardinals 2, Allen threw his fourth touchdown pass of the game while falling backwards to avoid a pass rush. The pass landed perfectly in Olsen’s hands in the back of the end zone. It was Allen’s fourth passing touchdown of the day and Olsen's second scoring grab. It made the Cardinals deficit two touchdowns and forced the rookie Murray to throw the rest of the way. The Panthers pass rush was able to harass Murray, getting five of their eight sacks after this score.

2 – Arizona 2nd-and-9 at Arizona 26 with 1:26 left in the 3rd quarter: Having just seen Carolina running back Christian McCaffrey burst straight through the Cardinals defense for the team’s second touchdown of the second half to go up eight points, Murray needed to answer the score. He fired a pass toward Larry Fitzgerald, but the pass sailed over the Hall of Famer and into Jackson's grasp for his first interception of the season. Jackson returned it to the Cardinals 22, setting up another scored for the Panthers.

1 – Carolina 2nd-and-2 at the Carolina 24 with 2:05 left in the 3rd quarter: With the Panthers leading 21-20 and backed up on their own 24, McCaffrey followed Olsen up the middle on a handoff and raced virtually untouched to the endzone. Cardinals defensive back Byron Murphy was the last man with a chance to bring McCaffrey down, but he skipped over his shoe-lace tackle and scored. It put McCaffrey above 100 yards rushing. More importantly, it forced the Cardinals into playing catch up, which they never succeeded in doing.