With 14,731 career receiving yards, Steve Smith Sr. is the eighth-leading receiver in NFL history. However, without a job that he had at Taco Bell in his youth, the two-time All-Pro may have never gotten a chance to star for the Carolina Panthers and Baltimore Ravens.

Smith initially explained how the job helped him to afford lunch and prom in high school but then took a detour in explaining how working at Taco Bell may have prevented him from being killed during his time at Santa Monica College.

"What's crazy, is that job, later in life, ended up pretty much saving my life, to be honest," Smith recently explained on 10 Questions with Kyle Brandt. "What I mean by that is, I know this is a shocker, but I got in a fight in practice with a teammate in junior college. We squared up, and he took that L, and as the folks say today, no cap. He got molly-whopped. And on Fridays, I didn't have class, so I would work at Taco Bell. And then on Saturday mornings, I would catch the bus at about 4:00 in the morning, from the inner city, go up there, work from 6:00 until about 2:30 and then go to school. We played night games, so I would go to my boy's house, and then we would play that game at night. So I would literally be working all day.

"But what happened was that on Friday, I didn't make walk-through, because I was working, as usual. But old boy that I got in a fight with, he was waiting in my locker area with a pistol. And he was in the locker room, waiting basically to shoot me. And if I would have came in, he would have shot me. But the fact of the matter is, I didn't show up that day, because on Friday's, I didn't have to do the walk-through because I was working. So it's kind of crazy how all of that intertwined. Some people look at working in fast food as a curse, but for me, I really look at it like it was a gift."

Smith declined to name who that teammate was, and said that they moved past the incident and he hopes that his former teammate is doing well today. It's unclear how he became aware that the teammate had been waiting for him with the weapon, and why he was safe to return to practice in the days after.

As the show "Last Chance U" has demonstrated, some future NFL stars can be found at junior colleges, whether it's because they had poor grades in high school, have had issues with the law, weren't highly recruited out of high school or things didn't work out when they initially tried to go to a D-1 school. Smith was teammates with Chad Johnson briefly at Santa Monica (that's not a suggestion he was the one referred to above), and his future NFL teammate Cam Newton won the 2009 NJCAA National Championship at Blinn University, in between D-1 stints at Florida and Auburn. 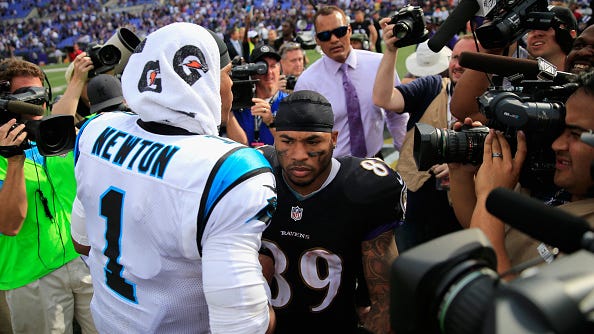