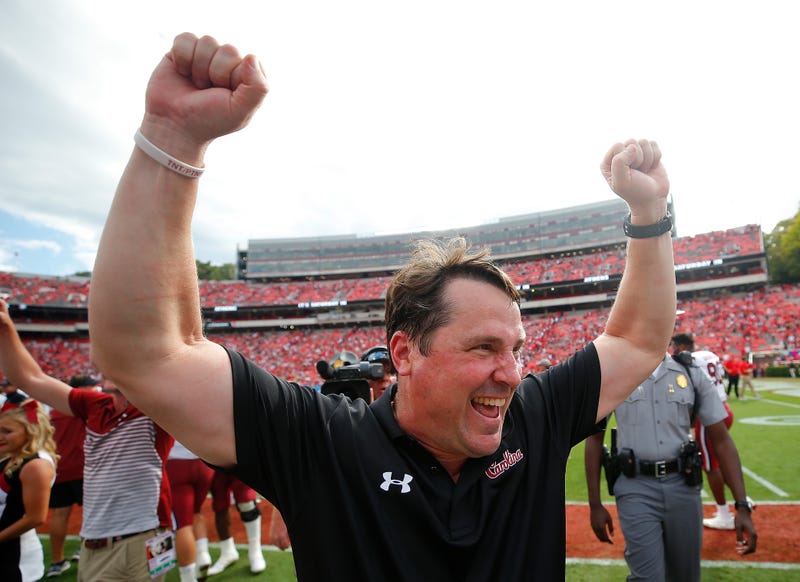 The last time South Carolina beat Auburn on the gridiron, Franklin Delano Roosevelt was in office as president for a mere eight months. A 12-game losing streak dating back to Dec. 2, 1933 was snapped by the Gamecock on Saturday with a 30-22 victory over the 15th-ranked Tigers at Williams-Brice Stadium.

South Carolina was outmatched, but found a way to take down Auburn despite being outgained by 184 total yards in the game. A major reason for the upset was the play of USC's defense, who forced Tigers' quarterback Bo Nix to throw three interceptions and set up the Gamecocks with a short field each time.

South Carolina cornerback Jaycee Horn picked off Nix twice with both turnovers being returned inside Auburn's 30-yard line. The Gamecocks were able to convert those turnovers into rushing touchdowns by Kevin Harris. The sophomore running back carried the load out of the backfield for USC with 25 carries for 83 yards and the two scores.

Nix suffered one of the worst games in his young career at Auburn. He completed 24-of-47 passes for 272 yards with a touchdown to three interceptions.

Auburn haven't lost to an unranked team in two years. A 30-24 loss at Tennessee on Oct. 13, 2018 was the second of back-to-back losses against a team outside of the Top 25. It was also the last time the Tigers dropped two straight games going back to 2015.

USC’s last victory over a ranked opponent came a little more than a year ago against No. 3 Georgia, a 20-17 double-overtime thriller shaking up the outlook of the College Football Playoff.

music
These are the scariest movies most likely to raise your heart rate
news
Trump says vaccine coming in 'a couple of weeks' will end pandemic 'quickly'
music
Kane Brown wishes happy birthday to his 'angel' daughter on first birthday
sports
Kirk Herbstreit is interested in calling NFL and NCAAF
news
Pa. National Guard arrives in Philadelphia amid Wallace unrest
news
Experts and parents call for an end to daylight saving time amid COVID-19