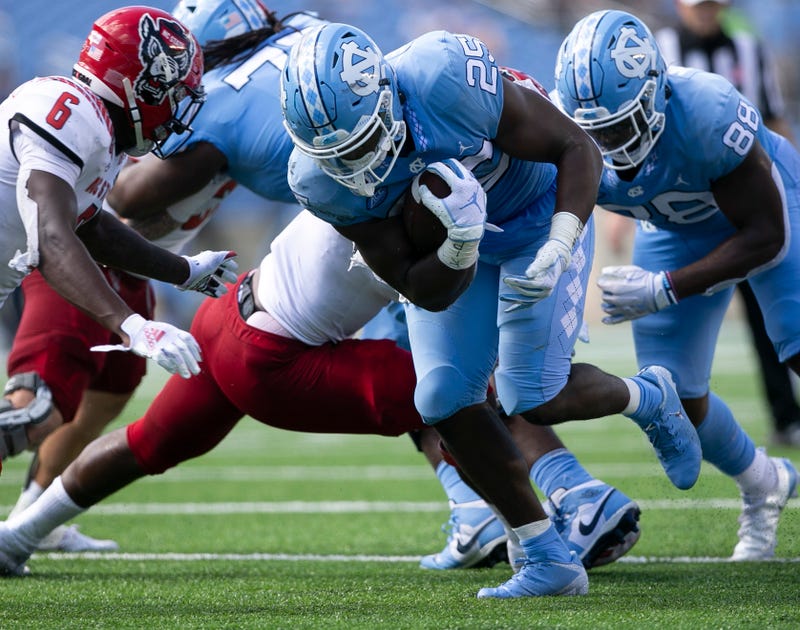 CHAPEL HILL, N.C. (AP) — North Carolina responded to its first loss with another dominating rushing performance, along with forcing the turnovers that had largely eluded the 14th-ranked Tar Heels this season.

Javonte Williams ran for 160 yards and three touchdowns to help UNC beat No. 23 North Carolina State 48-21 on Saturday in the first meeting with both rivals ranked in the AP Top 25 since 1993.

Michael Carter ran for 106 yards and a score of his own for the Tar Heels (4-1, 4-1 Atlantic Coast Conference), who used a run-through-and-over-tacklers ground game that helped them take control in the third quarter. And it came two weeks after Carter and Williams powered the Tar Heels to 399 yards rushing in a win against Virginia Tech.

“I said it earlier in the year and they reinforce it every week: I think they’re probably the best combination of two backs in the country,” UNC coach Mack Brown said, adding: “When we get them going, the rest of it works.”

UNC ran for 326 yards and finished with 578 overall after last week's loss at Florida State, beating the Wolfpack (4-2, 4-2) by a lopsided margin for the second straight season. It marked UNC's biggest margin of victory against a ranked opponent since 2001.

Williams had three touchdowns in last year’s 41-10 win, then had a pair of short TD runs as UNC ran off 21 straight points after leading just 17-7 at halftime. He punctuated another big rivalry performance by blowing through a huge hole up front, then cutting past multiple defenders to the pylon for a 27-yard score that made it 45-14 with 14:11 left.

Sam Howell threw for 252 yards and a TD for the Tar Heels, while Dyami Brown had 105 yards on a career-best seven catches.

The Wolfpack played without injured starting quarterback Devin Leary. Bailey Hockman started but was pulled after three series for true freshman Ben Finley, only to see the Wolfpack go back to Hockman in the third after Finley threw two interceptions — one off a bobbled pass by Dylan Parham in the end zone that should’ve been a first-half touchdown -- and lost a fumble on a sack.

Finley threw a 42-yard score to Emeka Emezie, while Hockman scored on a short keeper and threw for a TD after returning with the Tar Heels up big. But N.C. State managed 34 yards rushing and had four turnovers.

“We just didn’t play good enough to win, didn’t give ourselves a chance with the turnovers,” Wolfpack coach Dave Doeren said. “Like I told them in the locker room, if you don’t stop the run and you turn the football over, it’s a really hard day. And that’s what happened today.”

N.C. State: Three straight wins had pushed the Wolfpack to a surprisingly strong start for a team picked to finish 11th in the league. But N.C. State fell behind 14-0, couldn't run well and lost starting running back Ricky Person Jr. to a first-half concussion. Now the Wolfpack must sort out their QB situation, with Doeren saying the team originally planned to get Finley just a first-half series but stuck with him until his “inexperience showed up."

UNC: The Tar Heels had won six straight games before last weekend’s loss at FSU. The response was another big offensive game while the defense's four takeaways doubled their season count coming in, led by Chazz Surratt forcing Finley's fumble and intercepting a tipped ball.

The Wolfpack program's Twitter account posted a pregame hype video Friday that asked: “What's a ram to a wolf?” Asked about the video, Howell said “someone might've” shown it to him before offering his retort.

“We don’t really care about them,” Howell said. “That’s more for them, just to give them some false confidence before the game. ... We know what a ram is to a wolf, I think we saw that out there today. It could’ve been a lot worse than it was. So I’m not going to say anything else about that.”

N.C. State had allowed an average of 101 yards rushing during its three-game winning streak, but the Tar Heels averaged 5.9 yards per carry on 55 attempts.

“They just outplayed us. There’s no excuses,” Wolfpack linebacker Isaiah Moore said. “We’ve got to tackle and get them to the ground, and we didn’t do that today.”

The Tar Heels could inch back up after taking a huge slide from No. 5 — their highest ranking since 1997 — after the FSU loss. The Wolfpack could end up out of the poll after a one-week stay.

N.C. State: The Wolfpack’s schedule hits an open date next weekend before hosting No. 11 Miami on Nov. 6.