D.K. Metcalf entered the 2019 combine with a lot of hype and an equal amount of skepticism revolving around his fit within a much more competitive league and a not-yet-developed skill set. Though he impressed with his athleticism and displays of physicality at the combine, he fell down the draft boards. The Seahawks scooped him up at the end of round two, while receivers J.J Arcega-Whiteside, Parris Campbell and Andy Isabella were taken ahead of him.

If you paid attention to the NFL in 2019, you know that Metcalf was the best wide receiver of those four by a significant margin.

This begs the question: how do you evaluate these players throughout the combine and properly take away how they’ll look in the NFL? Apparently, after all these years, the answer is still hard to find.

What isn’t hard to find, though, is the excitement and buzz created by the combine, as coaches, scouts and fans alike are ready to watch these athletes give it their all in the hopes of improving their draft stock and being the next breakout prospect.

Whether it’s the measurements and vitals of certain players -- some of which have already caught the eye of scouts on Monday (see below) -- or the off-field interviews, or the electric performances in various drills, there will be a lot to take in as the combine gets underway.

Here are 11 players who will be exciting to observe and uncover more about through the next couple of weeks. 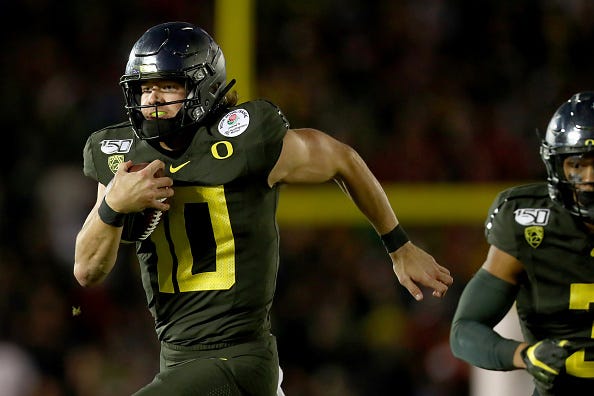 The primary competition for Tua and his draft stock is likely Oregon quarterback Justin Herbert, who has been lauded by some, scrutinized by others and should be viewed by all as a must-watch participant.

The most obvious characteristics that Herbert has going for him are his size and arm strength. His 6-foot-6, 236-pound frame makes him especially imposing as a quarterback, as the only notable quarterbacks in today’s NFL that match his height are Joe Flacco and Nick Foles. However, Herbert is a better threat to break out of the pocket and either throw on the run or take off downfield.

Jacob Eason, similarly to Herbert, is known for his physical stature and his cannon of an arm. He has much lower projections than Herbert, though, and the combine may reveal some of his deficiencies as a future professional passer.

Things to watch for in Feb. 27’s on-field workouts are the two big quarterbacks’ mobility and accuracy. 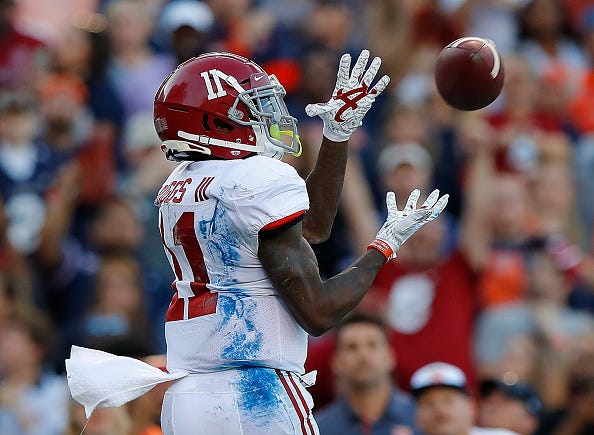 Of this trio, Henry Ruggs is getting the most attention as a legitimate top-three receiver in this draft. Along with Jerry Jeudy and CeeDee Lamb, Ruggs is a potential top-10 or -15 pick in the draft, and everyone will have their eyes on the TV when he lines up for the 40-yard dash. He’s expected to closely contest John Ross’ combine record of 4.22 seconds, given that he recorded a 4.25 second time at Alabama’s Pro Day. He’s already making waves early in the combine after measurements.

To put that number in perspective, Odell Beckham Jr.’s hands measured at 10 inches at the 2014 combine.

Reagor and Hamler may not be getting the same buzz as Ruggs, but they are both considered threats to run a 40-yard dash under 4.30 seconds, meaning that they both have the potential to be the fastest receiver in the class and raise interest in their potential as NFL receivers.

The Battle of the Backs: D’Andre Swift and J.K. Dobbins 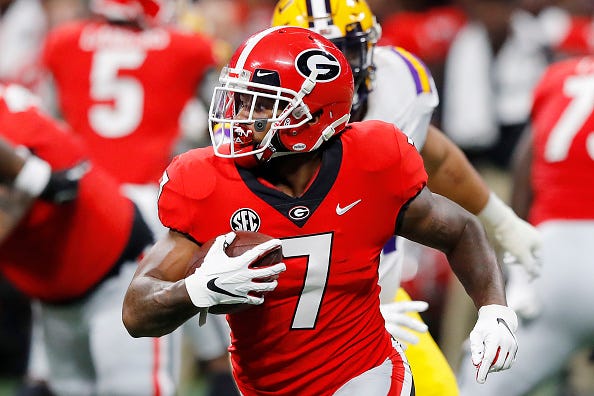 RADIO.COM Sports staff writer Tim Kelly had both Swift and Dobbins going at the back-end of the first round of the draft, and for good reason. Both are projected by the majority of scouts to find an immediate role in the NFL and make an impact for whichever teams are needy of backfield help.

One aspect of their skill sets that will be important to evaluate is how each performs as a receiving threat in today’s NFL, which constantly demands versatility from players like Christian McCaffrey and Deebo Samuel. Swift looks to have the advantage in this category: his NFL.com draft profile lists “soft and sticky” hands and an “expanded route tree” as part of his arsenal, while Dobbins had some drops which were especially memorable given that they came in the Fiesta Bowl against Clemson. 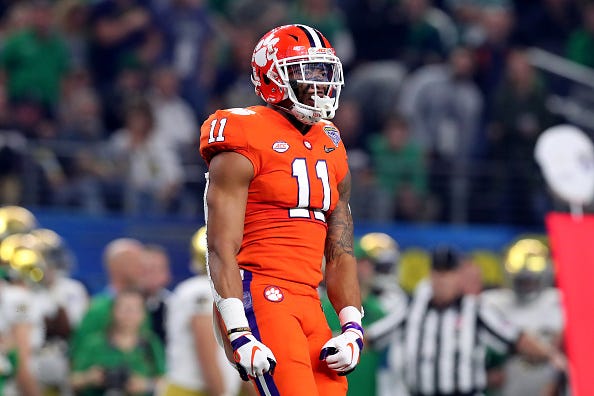 Isaiah Simmons has been attracting attention from scouts as an extremely versatile player that could fill several holes for a defense in need. In fact, NFL.com’s Daniel Jeremiah lauded Simmons as a “defensive chess piece” that could see “his role… change week to week, depending on the opponent” in today’s league. With guys like Lamar Jackson taking over the league and exploiting the weaknesses of various defenders, a player without many weaknesses and the athleticism to adjust based on the matchup seems like a lock for a top-10 pick.

The combine will leave us with several takeaways as to the value of these two players. As both are linebackers, the off-field aspects of the combine which allow them to display their leadership should be areas where they can excel and separate themselves from the rest of the group. Defensive versatility comes with a component of leadership and reliability as a key cog of the system. Additionally, Chaisson’s injury history -- including a torn ACL and some ankle issues -- may be something to focus on, though he was available for most of the 2019 season without major problems. 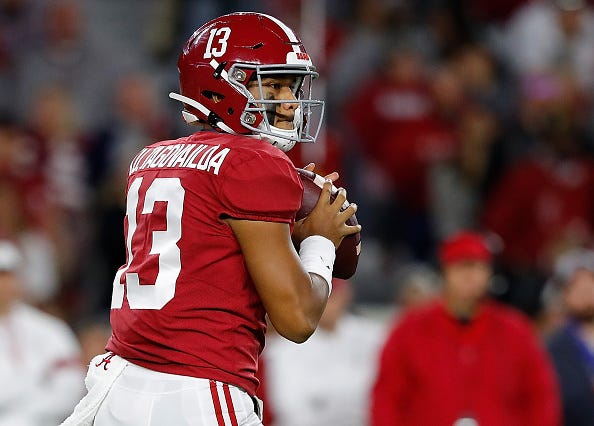 Okay, so maybe this is a bad one to include in a list of “guys to watch.” You won’t really have much to watch, per se. Tua’s combine won’t take place on the field, unlike most intriguing candidates, but instead will play out inside medical examination rooms.

And maybe it’s not fair to call him a medical mystery, as recent reports indicate that his health issues are trending toward the positive. For one, NFL.com writer Nick Shook reported that the Alabama alum’s hip scan revealed that the fracture has healed and that he’s making good progress.

The bigger mystery is where he will ultimately fall in the draft, as several teams -- including some surprise organizations -- are interested in his services. As a result, he may be the player with the most riding on this combine. Any evaluations that indicate health problems could drop him below other quarterbacks in the rankings.

Shenault has explosive potential and will be valued as a top receiver, even in a loaded class. At the same time, he seems to be a boom-or-bust candidate, and his pro comparison of Sammy Watkins (given by Joe Marino of The Draft Network) accurately represents the blend of massive upside and potential risk due to health.

Watkins, drafted fourth overall in 2014, has only played one full season in his career and has been streaky even when healthy. Though Shenault’s eventual landing spot won’t have to use a top-five pick on him, he will still be a first-round commodity and carries significantly more risk than some other names surrounding him.