The Milwaukee Bucks are one loss away from seeing a dream season slip through their fingers.

The Bucks on Friday lost their third consecutive game in as many tries against the Miami Heat in their NBA playoff series, bringing Milwaukee to the precipice of yet another crushing late-season collapse.

The back-and-forth affair marked the third terrific game so far in the series -- save for a bizarre display of officiating that led to an anticlimactic ending to Game 2. 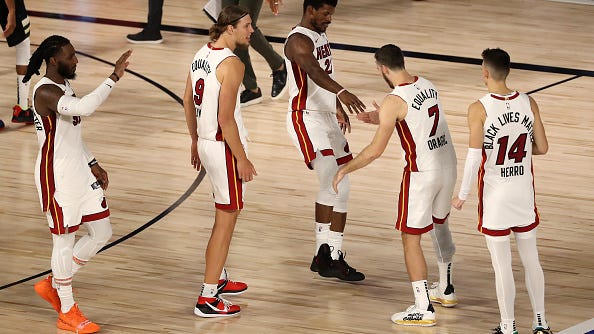 Giannis fell just one assist shy of a triple-double, but was held to 21 points on an inefficient 7-of-21 shooting.

The recent struggles mark a stunning downturn for the Bucks, who at one point in the regular season were on pace to challenge the 2016-17 Golden State Warriors for best record in league history. The Bucks ripped off 18 consecutive wins early in the campaign, a stretch that spanned over a month from early November to mid-December.

The Bucks had the most wins and the league's best winning percentage when play was halted due to the coronavirus in March.

However, the team's issues appeared to crop up before the shutdown, when they dropped four of their final five games. When play resumed, they never seemed to recapture their earlier form, going just 3-5 in seeding games inside the bubble -- including a historic upset defeat at the hands of the Brooklyn Nets.

Milwaukee's postseason began on a similarly ominous note with a first-game loss in their series against the Orlando Magic, though they rebounded to take the next four games.

Now, the team with the NBA's best record will need an unlikely four-game winning streak to beat the Heat -- or else face another crushing early-round exit for the third consecutive year. No team has come back from a 3-0 deficit in NBA postseason history.

The collapse has renewed criticism from some corners that Giannis is a secondary star -- or a Pippen in need of his Jordan -- and fueled speculation about his long-term future. The sixth-year superstar is a free agent after the 2020-21 season.