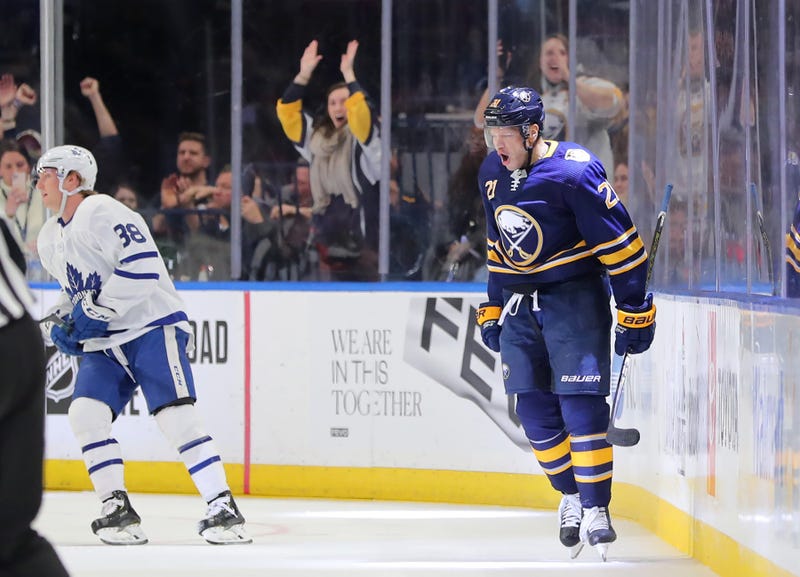 Right from the opening faceoff on Sunday night, the Buffalo Sabres were all over the Toronto Maple Leafs, and they didn't really let up for most of the night. Buffalo eventually ended up with three third period goals in a 91-second span to dominate their Atlantic Division rival, 5-2 at KeyBank Center.

The Sabres caught the Maple Leafs on the second half of a back-to-back and took advantage of a team that looked tired from playing the night before in a 4-2 win over the Ottawa Senators.

Buffalo peppered Toronto goalie Frederik Andersen with 16 shots in the opening period, but to his credit, he stopped everything that came his way. His counterpart, Carter Hutton, kept six pucks out of the net to keep things scoreless through 20 minutes of play.

In the second period, the Sabres found a way through Andersen just 1:32 in as Sabres defenseman Rasmus Dahlin carried the puck into the Leafs zone and nearly got pinned against the boards. However, he found a way to get the puck to his defensive partner Colin Miller, who fired a shot from the point that missed, but the rebound bounced right to Johan Larsson to the left of the Toronto net. Larsson was able to bang in his sixth goal of the year to give Buffalo the 1-0 lead.

Midway through the second, the Sabres added to their lead when Miller fired another shot towards the Toronto net and ended up getting tipped in by forward Conor Sheary. The veteran winger gave Buffalo a 2-0 lead with his ninth goal of the season.

A couple minutes later, the Leafs finally answered with Egor Korshkov's first career NHL goal when he took advantage of a bad, yet rare Henri Jokiharju giveaway that directly lead to the Leafs goal.

Once again, the Sabres were the better team in the second period, ending up with a 12-6 shot advantage in the period, and a 28-12 advantage through 40 minutes.

The Sabres of old made a minor appearance at the start of the third period, allowing the Leafs to take control of play early. The sloppy play in their own end resulted in the game-tying goal just 2:11 into the period when Zach Hyman redirected a shot from Jake Muzzin at the point to make it a 2-2 contest.

About three minutes later, the Sabres went on the power play and they never looked back.

With Muzzin in the penalty box for tripping, Jack Eichel took control on an offensive rush as he took a return pass from Victor Olofsson and fired a wrist shot by Andersen to make the score 3-2. The goal was Eichel's 33rd tally of the season.

That's when the floodgates opened for the Sabres.

Just 49 seconds after Eichel gave Buffalo the lead, forward Kyle Okposo took advantage of a bad giveaway by the Leafs and finessed his way for a goal to double the lead to 4-2. Okposo not only scored his sixth goal of the season, but also picked up point No. 500 of his career on the play.

It was 42 seconds later when defenseman Rasmus Ristolainen took advantage of another bad play in the Leafs defensive zone and found a wide-open Jimmy Vesey next to the Toronto net for a tap-in goal to make it a 5-2 score.

The three-goal period for the Sabres in the third period was the first time they've scored that many goals in that span or less since April 3, 1998 in a 5-4 win over the Boston Bruins, where Brian Holzinger, Matthew Barnaby and Vaclav Varada all scored within a span of 1:08.

The Sabres will try to extend their three-game win streak as they travel to the Canadian Tire Centre in Kanata, Ontario to take on the Ottawa Senators on Tuesday night. Mike Schopp and the Bulldog will take you through the Paul William Beltz Pregame Show starting at 6:30 p.m. with faceoff coming just after 7:30 p.m. on WGR.