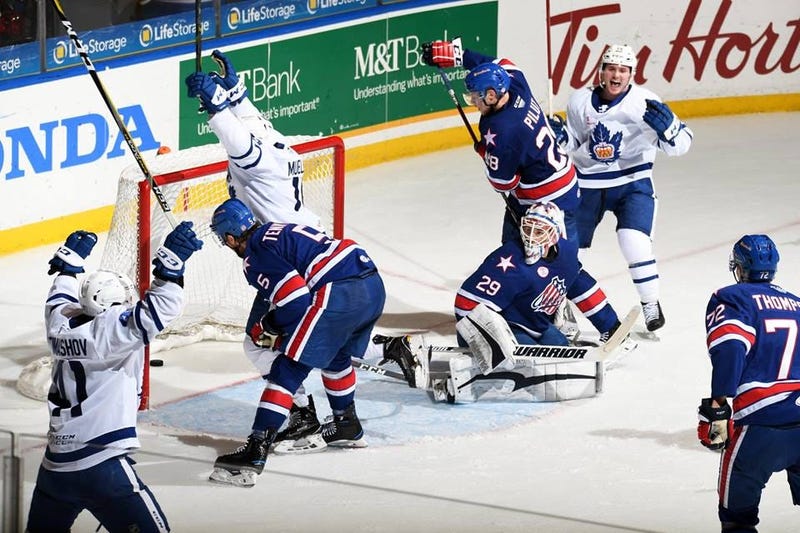 After an electrifying start to Game 1 of the North Division semifinal, the Rochester Americans stumble down the stretch in a 4-1 loss to the Toronto Marlies on Friday night at Blue Cross Arena.

The opening period was everything that one could anticipate from this series - fast-paced action from end-to-end, strong, physical play, and a sense of urgency from the start of the game.

The Amerks ended up out-shooting the Marlies in the first by a 15-6 total, but they generated a majority of the offensive zone time and hemmed Toronto in their own end. In addition to the shots on goal, Rochester had a few more good chances that just missed the net. In the opening two minutes of the period, defenseman Zach Redmond rang a shot off the cross bar. Later in the period, forward Victor Olofsson got a good look on a shot to the right of the Toronto net, but his shot hit the post.

Olofsson's line with Rasmus Asplund and Danny O'Regan had a spectacular first period with a number of quality chances, including five shots on goal from Asplund. The Amerks forward also had a chance where he got a nice cross-ice feed off to the left of Kasimir Kaskisuo in net for the Marlies, but his shot just slipped through his legs and wide of the net. Moments after that missed chance, Olofsson was sprung for a breakaway and ended up hitting the left post.

The Amerks get another great chance at the start of the second period when C.J. Smith got in behind the defense for a breakaway, but his shot ended up being blockered away by Kaskisuo.

The Amerks let off the gas a bit at the start of the period, and it ended up costing them just 2:53 into the period. After a shot from West Seneca native Chris Mueller was turned aside by Amerks goalie Scott Wedgewood, no body came in to clear the rebound chance, allowing former Amerks forward Nick Baptiste to poke the rebound in to make it a 1-0 game for the Marlies.

Rochester's last real glorious opportunity came less than three minutes later when defenseman Lawrence Pilut waited out the Marlies defense for a lane to open up for a shot. He let go of a nice wrist shot from the top of the faceoff circle, but his shot hit the iron to the right of Kaskisuo.

Later in the period near the end of an Amerks power play, O'Regan took an unnecessary penalty when he slashed the stick out of a Marlies defenseman in front of the net. Just as the penalty expired to O'Regan, Mueller was able to get a piece of a Rasmus Sandin shot from the point and the puck managed to just trickle in over the line past Wedgewood.

Rochester ended up out-shooting the Marlies again in the period, 8-7, and held on to the overall advantage, 23-13.

The third period got off to a slow start for the Amerks as Toronto went into shutdown mode, content to sit on the lead. Rochester only picked up two shots on goal in the opening 10 minutes of action, and went nearly eight minutes between their second and third shots of the period.

The Amerks got into more penalty trouble at the halfway point of the period as Dalton Smith went to the box for interference. Just 49-seconds into the power play for Toronto, Mueller found himself uncontested in-behind Wedgewood as he came out to challenge a shot from Jeremy Bracco. Wedgewood got a piece of the shot, but let is squeak through his body and his blocker side, and all Mueller had to do was guide the puck in over the line.

Rochester had a chance to get on the board and make things interesting with a power play at the 13:17 mark of the third, but the Amerks ended up shooting themselves in the foot with a shorthanded goal against with 5:15 remaining in regulation. Marlies forward Adam Brooks ended up taking the puck from behind the Amerks net, and ended up wrapping it around the far-side leg of Wedgewood on his right side and in for the 4-0 lead.

Tage Thompson ended up playing spoiler to Kaskisuo's shutout bid, scoring with just 1:08 remaining in regulation to get the Amerks on the board. His shot to the left of Kaskisuo ended up beating the Marlies netminder over the short-side, glove hand with Taylor Leier setting a screen in front of the net.

Rochester ended up being out-shot in the final period by a 10-7 total, but ended up with the 30-23 shots advantage despite the loss.

Kaskisuo ended up with 29 saves on the night, while Wedgewood struggled in the third period and ended up with 19 saves total on 23 shots faced.

For the Amerks, their home woes continue with their fifth loss in the last six games played at Blue Cross Arena.

As for their playoff woes, the Amerks have not won a playoff game since the 2014 Calder Cup Playoffs against the Chicago Wolves. Chicago ended up winning the best-of-five series in five games. In addition to their winless streak in the playoffs, the Amerks have yet to win a playoff game against the Marlies in seven games played. Rochester was swept in both of their playoff appearances with the Marlies in the first round of both the 2012 and 2013 playoffs.

The Amerks will look to even the best-of-five series with the Marlies on Easter Sunday with a 3:05 p.m. faceoff in Rochester. You can catch all of the action with Don Stevens and Ric Seiling on the call on 95.7 FM and 950 AM, ESPN Rochester.