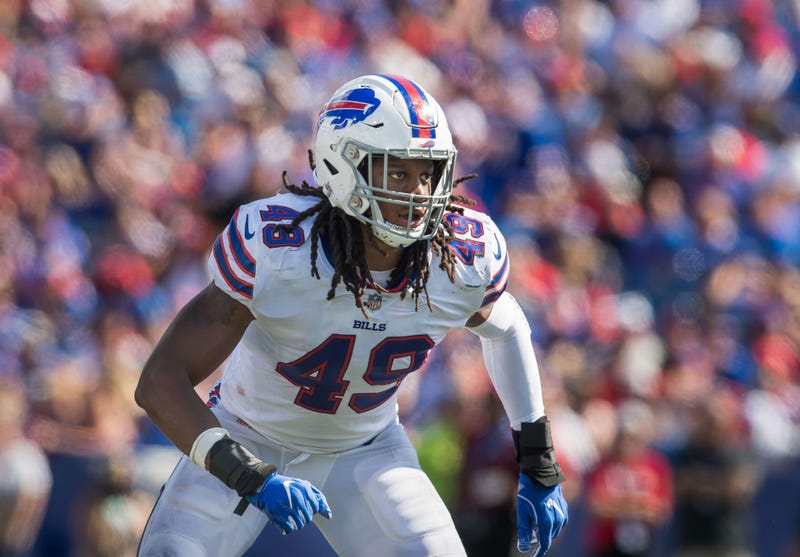 The 2018 season was filled with plenty highs and lows for the Buffalo Bills.

The highs featured some excellent performances from the defense, which ranked second overall in the NFL by the end of the season, as well as some stellar offensive performances against teams like the Minnesota Vikings, Jacksonville Jaguars and Miami Dolphins. The lows featured some struggles on the offensive side of the ball throughout the season, and some blowout losses sprinkled here and there.

The roller coaster ride ultimately ended with the Bills finishing 6-10. At the same time, it gave some hope to Bills fans as some promising rookies like quarterback Josh Allen, wide receiver Robert Foster and cornerback Levi Wallace all coming into their own.

Another rookie last season that stood out and gave that same sense of hope is middle linebacker Tremaine Edmunds. The 21-year-old was selected with the 16th overall pick in the 2018 NFL Draft by the Bills. who traded up from the 22nd overall pick to select Edmunds.

NFL Network analyst Brian Baldinger is someone who liked what he saw from the former Virginia Tech middle linebacker. Here is some of what he had to say on his Twitter series "Baldy’s Breakdowns":

.@BuffaloBills @maine_savage23 #Hokies was a true Savage at MIKE LBer for the #BillsMafia. Lead the team in tackles; and passes defensed and it was clear that his length in the “middle” was a problem for a lot of QB’s. And all before age 21!! #BaldysBreakdowns pic.twitter.com/gZTqRewBgC

With One Bills Live on Tuesday with John Murphy and Steve Tasker, Baldinger spoke highly of the physical presence that the Bills middle linebacker brings on game day.

“He’s got a tremendous presence,” Baldinger said. “Obviously his size alone, when you combine that with elite speed…I always think when your middle linebacker is fast your defense looks faster. I think he was a guy that just got better [with> the more he saw as the season went along… I expect that Sean [McDermott> and Lesile [Frazier> this year will use him in a variety of other ways.”

Baldinger was an offensive lineman for the Dallas Cowboys, Indianapolis Colts and the Philadelphia Eagles over 11 seasons in the NFL. He couldn’t imagine what it would be like to have Edmunds’ abilities at just 21-years-old.

“I just saw a lot a great things for a guy that,” Baldinger said. “I can’t really even fathom being that young and being that big, that physical, and really that talented so early. You just don’t see NFL players come in at that age and play at this level very often, if at ever at all.”

With Edmunds' size at 6' 5" and 249 pounds, as well his speed and ability, there have been some questions as to whether or not Edmunds would be best utilized as a strong side linebacker or a weak side linebacker. Baldinger disagrees with that idea.

Much like Allen, Foster and Wallace, the Bills need Edmunds to make progress towards becoming an elite player for the team to succeed this season. Baldinger expects Edmunds to make a big leap this year.

Baldinger also touched on the progress of Allen, as well as his capabilities as the Bills starting quarterback. He finished his rookie season with a 56.2% completion rate, 10 touchdowns and 12 interceptions in 12 games.

“You’d like to see him run less and throw more and throw at a higher percentage, I think he’s capable of doing that,” Baldinger said. “I see a lot of quarterbacks go from 10 touchdowns and 12 interceptions in their first year when their trying to figure everything out, trying to rebuild an offensive line…to going 18 [touchdowns> to eight [interceptions> the next year. I think you can see 18-20 touchdowns from Josh this year.”

Baldinger also touched on the overhaul the Bills have made to the offensive line, and how dramatically the changes have been compared to last offseason.

“You’re not going to find a Wild Card spot, or be in the hunt for a Wild Card spot, without a good group up front,” Baldinger said. “We’ll see if Cody Ford can come in and lock down that right tackle spot… we’ll see if Mitch Morse coming from Kansas City can upgrade the center position… I was surprised that the Bills found a way to win six games last year, just looking at the offensive line in August a year ago.”