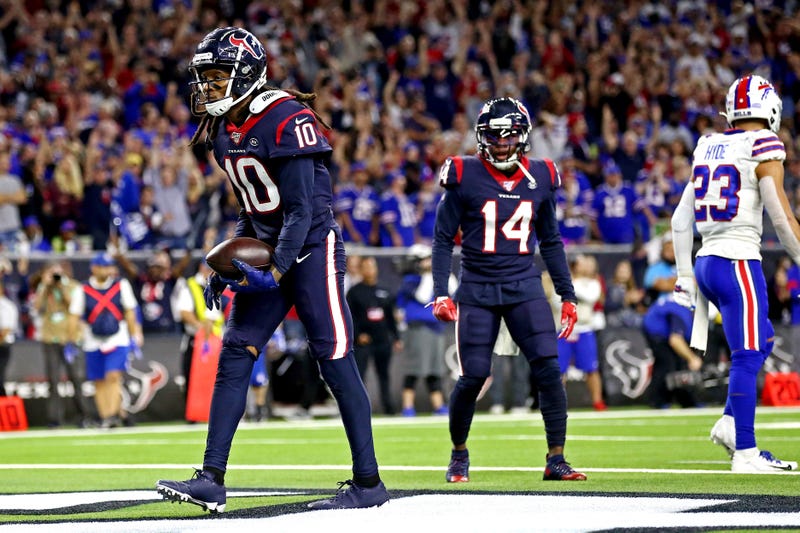 The Buffalo Bills' 2019 season collapsed in front of their own eyes on Saturday in Houston, Texas.

A blown 16-point lead highlighted the Bills' 22-19 overtime loss at the hands of the Houston Texans in the AFC Wild Card Round at NRG Stadium. Buffalo gave up 19 unanswered points in the second half en route to the defeat.

Josh Allen had an up-and-down two halves of play, completing 24-of-46 passes for 264 yards, while adding 93 yards rushing on nine carries. Allen also caught a 16-yard touchdown pass from wide receiver John Brown in the loss.

Devin Singletary led the Bills in receiving with 76 yards on six receptions.

DeAndre Hopkins overcame a catchless first half in order to lead Houston with 90 yards on six receptions.

The game started off hot for the Bills as they went right down the field to open the scoring. Allen had a 42-yard run to spring open the first drive and put the team in position to use a familiar trick play to get into the end zone. John Brown took the reverse and threw a pass in the direction of Allen, who took it in and gave Buffalo a 7-0 lead. It was Brown's second career passing touchdown, while Allen became the third quarterback in postseason history to catch a touchdown pass (Nick Foles and Marcus Mariota).

The Bills defense was up to the task in the first half, not allowing Houston to even attempt a field goal, while racking up four first half sacks of Watson to keep Houston off of the board in the first two quarters.

Buffalo added a pair of field goals from kicker Stephen Hauschka to take a 13-0 lead into halftime. The Bills' defense limited Houston to just 81 yards in the first half.

An officiating gaffe to start the second half nearly awarded the Bills a touchdown on the opening kickoff, but officials deemed that returner DeAndre Carter had given up on the play and overturned the call on the field

The Texans would finally be able to get Hopkins involved, but the star wideout fumbled on his first reception of the game, which was forced by Buffalo's All-Pro cornerback, Tre'Davious White. While the Bills did not get a touchdown, they extended their lead to 16-0 thanks to Hauschka's third field goal of the game.

The Texans would turn it on after that, with Houston finding the end zone in order to cut Buffalo's lead in half. Watson ran the ball in from 20 yards out to get the touchdown, then kept it himself for the two-point conversion in order to shorten Buffalo's lead to 16-8.

The Bills' collapse would continue when Houston recovered a fumble from Allen and got a field goal out of the turnover, shortening Buffalo's lead to 16-11.

Buffalo then gave up the lead when Houston drove 74 yards into the end zone, capped off by Watson's five-yard touchdown pass to running back Carlos Hyde. After another two-point conversion for the Texans, they held their first lead of the game, 19-16.

The Bills looked poised to tie the game, but their drive stalled out after an intentional grounding penalty and a sack on fourth down led to a turnover on downs, putting Buffalo's chances on life support. However, the Texans decided to go for it on a 4th-and-1 while in field goal range and were stopped by Buffalo's defense, giving the Bills one last hope to force overtime.

The Bills had some wild moments on their final drive of regulation, with key third down conversions, as well as an attempted lateral play from Allen that wound up going out of bounds. The drive ended with Hauschka's fourth field goal of the day, tying the game up at 19-19 as time expired in regulation.

The two teams exchanged punts before Houston ended it with 3:20 remaining in overtime. The Bills looked to have Watson in their grasps for another sack, but the Texans quarterback escaped and found former Bills running back Taiwan Jones, who took the catch and run to the Buffalo 10-yard line.

Ka'imi Fairburn capped off the Houston with with a 28-yard field goal on the very next play.

The loss for Buffalo kept the team from winning its first playoff game in 25 years.

The Bills will have their locker room cleanout day on Sunday.