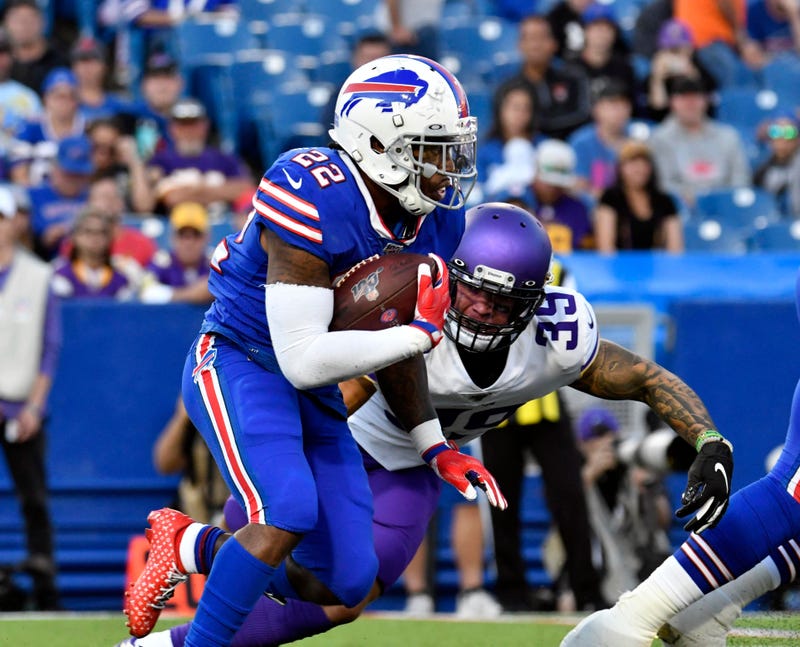 For the first time in franchise history, the Buffalo Bills went a perfect 4-0 in preseason play.

The Bills needed a comeback on Thursday in order to claim the win over the Minnesota Vikings, 27-23 at New Era Field.

Sparked by quarterback Tyree Jackson and running back Marcus Murphy, the Bills put up a 21-point fourth quarter with the final three touchdowns coming in the game's last four minutes.

Jackson started the game under center and went start-to-finish for the game. The University at Buffalo product was 22-of-33 for 175 yards and a passing touchdown in the game's final seconds to David Sills V to secure the win. Jackson also added 78 yards rushing and a rushing touchdown, leading the team in both passing and rushing.

Murphy's 79-yard punt return touchdown was in between both of Jackson's touchdown drives, while adding 27 yards rushing in the contest.

Ray-Ray McCloud III led the Bills in receiving with five catches for 48 yards.

The Bills offense was not off to the best of starts as Jackson had only 45 yards passing through the second quarter, and the team had a grand total of just three points at halftime. The defense held serve in the first half, led by defensive end Eddie Yarbrough, who had a team-high 10 tackles after the first half. His night was over after that productive first half.

The teams traded field goals in the third quarter, before Minnesota would break the game open and hold a 17-point lead late into the fourth quarter, up 23-6.

However, that was when the Bills wound up kicking into comeback mode, with a lengthy 12-play, 75-yard drive that ended with Jackson's rushing touchdown, with the Vikings still leading 23-13. The Bills defense forced the punt on the following drive, which Murphy would take to the house to bring the Bills within one score, cutting Minnesota's lead to 23-20 and set up the offense with a chance to win the game.

After the defense forced a three-and-out, Jackson and the offense took over with just one minute left, down by three and no timeouts to work with. Jackson and the offense promptly marched down the field, while also aided by a roughing the passer penalty. At the Minnesota six-yard line and the clock running down under 10-seconds, Jackson connected with Sills in order to put the Bills up with eight seconds left, 27-23.

Siran Neal intercepted the Vikings' final pass to secure the victory and give the Bills their first 4-0 preseason in team history.

For some of these players, it will be the last time they don a Bills uniform as roster cuts take place on Saturday. The roster will be trimmed from their current 88 players to the 53 that will start the season on September 8 against the New York Jets at Metlife Stadium.