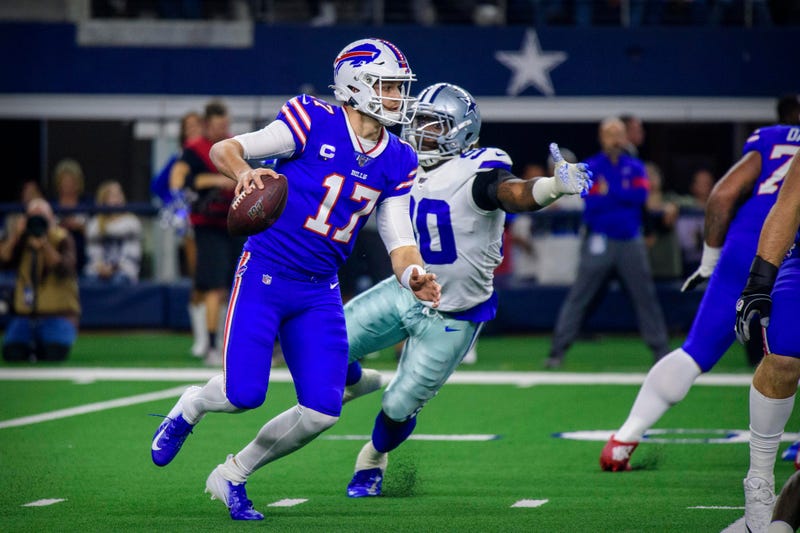 The Buffalo Bills got their ninth win of the 2019 season before the calendar flipped to December.

After an opening drive touchdown from the Dallas Cowboys, the Bills went on to score 26 unanswered points to grab a 26-15 win over the Cowboys on Thanksgiving Thursday at AT&T Stadium. With the win, the Bills improve to 9-3 in the AFC standings, which has not been achieved since the 1996 season.

While the Bills didn't get off to the best of starts, they dominated play from the second quarter onward for their third straight win of at least 10 points.

Josh Allen was superb under center for the Bills, going 19-of-24 for 231 yards and a touchdown both through the air and on the ground. Cole Beasley reeled in a game-high 110 yards on six receptions and a touchdown in his return to Dallas for the first time since signing with the Bills this past offseason.

The Buffalo defense was able to get a lot of pressure on Cowboys quarterback Dak Prescott all game, limiting him to 355 yards passing and a 65.3% completion percentage, while also forcing two turnovers. Rookie defensive tackle Ed Oliver had a standout game for the Bills, registering two sacks and a forced fumble in the win.

The Cowboys opened up the scoring on the first drive of the game with a nine-play, 75-yard drive that ended with an eight-yard touchdown pass from Prescott to tight end Jason Witten for Dallas' only lead of the afternoon, 7-0.

The Bills offense was only able to muster 48 total yards on two drives in the first 15 minutes of play, but the script flipped on the game in the second quarter.

Buffalo took their first drive of the second down the field and into the end zone, capped off by Allen finding Beasley for a 25-yard touchdown pass to tie the game at 7-7. Beasley's fifth touchdown of the season also brought an interesting statistic - the former Cowboys wide receiver became the third person to score a touchdown for and against Dallas on Thanksgiving Day.

After allowing the first touchdown, the Bills defense started to shine, as they forced back-to-back turnovers of Prescott.

The first turnover came thanks to defensive tackle Star Lotulelei, who intercepted a screen pass and gave the Bills an opportunity to take their first lead. However, Stephen Hauschka's 50-yard field goal attempt tailed wide-right and was no good.

The Bills immediately got another chance to take the lead as Oliver stripped the ball away from Prescott on the very next drive.

The Bills didn't miss out on that next opportunity, digging into their bag of tricks to claim a lead they would never give up.

The play started with Josh Allen handing the ball off to wide receiver Andre Roberts, followed by Roberts reversing it back to wide receiver John Brown, who then threw a pass to a wide open Devin Singletary to give Buffalo the lead. It was the first time a Bills receiver has ever thrown a touchdown pass in franchise history. Stephen Hauschka ended up missing the extra point wide-right, keeping the score at 13-7 in favor of Buffalo.

Dallas attempted to cut into the lead to end the half, but Lotulelei wound up getting his hand on the field goal attempt from kicker Brett Maher, helping to send it wide-left and end the half with the Bills walking back into the locker room with the lead.

Buffalo came out just as hot in the third quarter, taking the opening drive of the second half for a 41-yard field goal from Hauschka to make it 16-7.

After Dallas missed another field goal on their next drive, the Bills drove down the field to help pad their lead. This time, it was Allen taking it in himself with a 15-yard touchdown run to extend the Buffalo lead to 23-7.

Buffalo also managed to stop the Cowboys from cutting into the lead as the third quarter came to its end with the team's fourth sack of Prescott, ending Dallas' best threat to get back into the game.

Buffalo took over seven minutes off of the clock to add another Hauschka field goal to boost their lead to 26-7.

Dallas got a garbage time touchdown from Prescott to tight end Ventell Bryant late in the fourth quarter to make it a 26-15 game, but Micah Hyde sealed the Bills' win with an onside kick recovery with 4:01 remaining.

The Bills get 10 days off before their next game on Sunday, Dec. 8 against the Baltimore Ravens at New Era Field. Kickoff is set for 1 p.m and can be heard on WGR with John Murphy, Eric Wood and Sal Capaccio on the call.