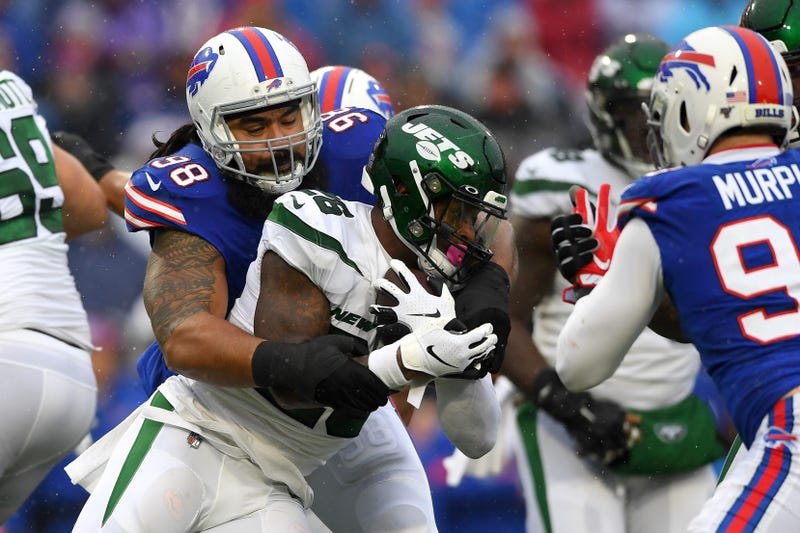 With a playoff spot already locked up, the Buffalo Bills were hoping to avoid injuries to key players when they hosted the New York Jets in their regular season finale on Sunday at New Era Field.

However, some players were banged up in Buffalo's 13-6 loss to the Jets, which dropped the Bills' final record to 10-6.

Buffalo already sat five starters to enter the game, keeping wide receivers John Brown and Cole Beasley, tight end Dawson Knox, running back Devin Singletary and cornerback Tre'Davious White inactive for the game. Linebacker Lorenzo Alexander was given an ovation after the Bills called a timeout to spell him from the game in the first quarter. Josh Allen only saw a couple series in the first quarter, going 3-for-5 for just five yards before bowing out to backup quarterback Matt Barkley.

Buffalo did deal with a couple of injuries in this game as cornerbacks Levi Wallace and Taron Johnson, as well as offensive tackle Ty Nsekhe all left the game with injuries and did not return. With the injuries in the defensive backfield, wide receiver Isaiah McKenzie wound up taking two snaps at cornerback at the end of the game. Offensive tackle Cody Ford and defensive back Siran Neal were also injured during the game, but both were able to return to game action.

After a missed field goal in the first quarter by Jets kicker Sam Ficken, he converted on his next field goal attempt in the second quarter to make it 3-0.

Barkley wound up with ball security issues in this game as he threw an interception near the end of the first half to give the Jets another chance to put up points with less than two minutes remaining. However, Ficken ended up missing his second field goal from 34 yards out.

Barkley and the Bills backups would get some good progress on their first drive out of the half, but Barkley was stripped of the ball on a sack and the Jets recovered the ball. The Bills eventually tied the game up at 3-3 with a 16-play drive that ended with a short 28-yard field goal from Stephen Hauschka.

The Jets wound up pulling away with the only touchdown of the game in the fourth quarter. Sam Darnold capped off a 75-yard drive with a one-yard touchdown pass to wide receiver Jamison Crowder to give the Jets a 10-3 lead.

New York kept that lead for the rest of the game as Barkley threw his second interception of the game to help the Jets add another field goal to make it a 13-3 game.

Buffalo drove down the field to get another field goal and cut into Jets' lead, 13-6, but Hauschka's onside kick attempt was recovered by the Jets, ending the game and handing the Bills their fourth loss at New Era Field this season.

The Bills will head to Houston, Texas to take on the Houston Texans in the AFC Wild Card Round on Saturday, Jan. 4 at NRG Stadium. Kickoff is set for 4:35 p.m. and can be heard on WGR with John Murphy, Eric Wood and Sal Capaccio on the call.