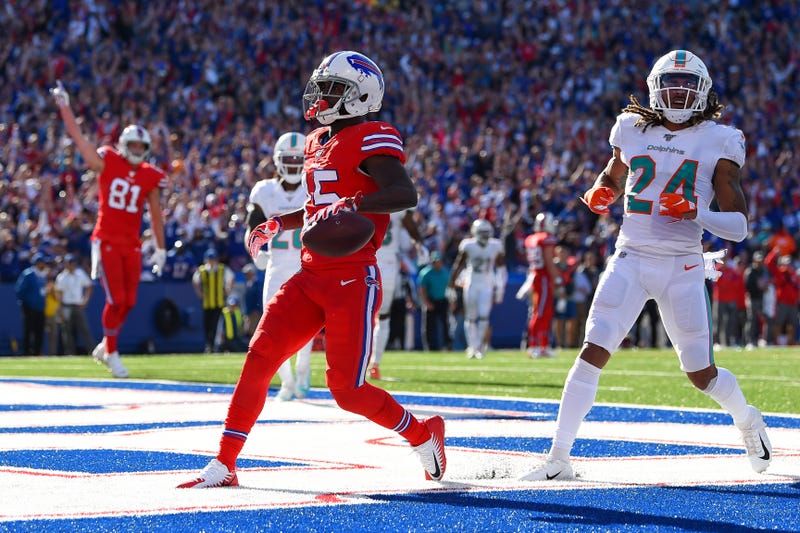 It was a tale of two halves at New Era Field on Sunday, but the Buffalo Bills still found a way to come up with a 31-21 win over the Miami Dolphins in Orchard Park.

The Bills scored 22 points in the fourth quarter to take down the Dolphins and improve their overall record to 5-1, which is their best start to a season since 2008.

Things didn't come easily for Buffalo this week as the winless Dolphins (0-6) put quite the scare into the Bills and their fans.

Josh Allen started off slowly en route to 16-of-26 for just 202 yards and two touchdowns, but he was turnover free for the entire game. Frank Gore ran for 55 yards on 11 carries, while John Brown reeled in five receptions for 83 yards and a touchdown. Cole Beasley also caught his first touchdown for the Bills in the win.

The first drive of the game saw Dolphins rookie defensive tackle Christain Wilkins get ejected on the second play of the game. He was penalized for a personal foul and was disqualified from the game after throwing a punch at Bills rookie offensive tackle Cody Ford.

Buffalo got the first of three field goals from Stephen Hauschka on that drive, as his 39-yard field goal gave the Bills a the 3-0 lead. Hauschka added on to the Bills' lead with his second field goal of the quarter, a 43-yard kick to put Buffalo up 6-0.

However, it was the Dolphins who got into the end zone first as running back Kalen Ballage gave Miami their first lead, 7-6 with a three-yard touchdown run early in the second quarter.

Buffalo responded with another field goal from Hauschka from 45 yards out to make it 9-7, but once again, Miami marched down the field and  the drive ended with former Bills quarterback Ryan Fitzpatrick connecting with wide receiver DeVante Parker for an 11-yard touchdown to give the Dolphins the 14-9 lead.

Buffalo couldn't get in any rhythm on their last drive of the half, and ended up getting booed off the field as they headed to the locker room for halftime.

The second half looked like it was going to be more of the same struggles from Buffalo's defense.

The Dolphins opened the third quarter with another drive into the Buffalo redzone, and getting as close as the Bills' two-yard line. However, Bills cornerback Tre'Davious White halted the drive with an interception at the two-yard line to give Buffalo a chance to get back in the contest.

The Buffalo offense woke up and promptly marched 98 yards to score their first touchdown of the game. On the third play of the fourth quarter, Allen connected with Brown for a 20-yard strike to put Buffalo ahead by a 15-14 score. The Bills then opted to go for the two-point conversion, and Allen was able to run it in from two yards out to up the score to 17-14.

White wasn't finished making plays as on Miami's next drive, the dynamic cornerback forced a fumble of wide receiver Preston Williams that was recovered by defensive end Jerry Hughes. Hughes ended up returning the ball 11 yards and gave the Bills the short field to work with at the Dolphins' 16-yard line.

The Bills took advantage and made the score 24-14 with a three-yard touchdown pass from Allen to Beasley with 6:31 remaining in the game.

The Dolphins made things interesting as Fitzpatrick and the Dolphins' offense marched down the field again and cut the score to 24-21. This time, it was Fitzpatrick avoiding sacks and running in an 11-yard touchdown with 1:45 to go.

However, the Bills ended up capping off the win in Orchard Park with a unique 45-tard onside kick return for a touchdown from safety Micah Hyde. Hyde was able to get up for the high-bouncing kick, come up with the ball, and all in one motion come down and sprint for the end zone.

The Dolphins got the ball back down 31-21 with 1:38 remaining, but the Buffalo defense gave them nothing to work with in the dying moments of the game.

The Bills get to continue their October homestand next Sunday as they host the Philadelphia Eagles at New Era Field. Kickoff is set for 1 p.m. with John Murphy, Eric Wood and Sal Capaccio on the call.