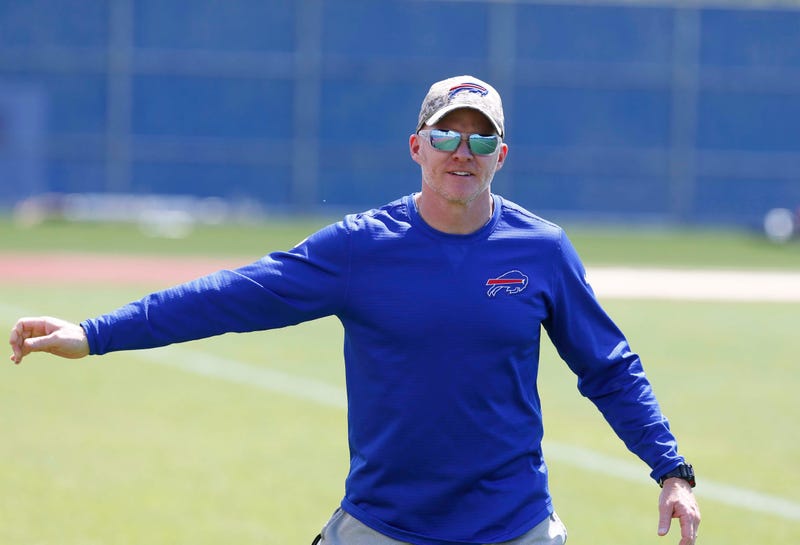 November 6, 2019 11/06/2019 1:37 pm
Orchard Park, NY (WGR 550) - Compared to some other teams in the NFL, the Bills have done pretty well on injuries this season. McDermott said there are factors involved, “It ebbs and flows. We had some injuries earlier in the year, we’re healthier now and it’s a real credit to the players, our medical staff, our strength and conditioning staff and our development staff. They’ve done a great job with everybody being on the same page. The players doubling down on their habits and they’ve taken great ownership of that which is good to see.”

When it comes to preventing injuries and maximizing performance, he says he meets with many people on that, “It’s about people getting together and talking through things together. The strength staff, the medical staff, sports science, team development and continuing to research what’s out there.

“There’s different ways of doing things, finding the best practices that are out there and we try to adjust what we do to those practices.”

The Browns come into Sunday at 2-6. This is a team that was supposed to challenge for the division, but despite the record, Sean McDermott thinks they have their hands full, “It’s a very capable, highly talented roster, they’re a good football team.

“What makes them so good is so many weapons. You commit to stopping the run and they beat you in the passing game.”

Baker Mayfield has two top notch receivers to throw the ball to in Odell Beckham, Jr. and Jarvis Landry. McDermott said they must have a solid plan, “That’s what keeps defensive coordinators and head coaches with defensive backgrounds up most of the week going up against this kind of outfit. They’re very talented whether it’s Levi [Wallace>, Tre'Davious [White> or whomever against Baker, and I know Baker with the draft going through the process a few years ago, he’s just a heck of a football player.”

The Bills are still not happy with their defense up front, so the team signed defensive tackle Corey Liuget. Liuget has started 103 games in his NFL career with Oakland and the Chargers. McDermott said, “We talk a lot in here about being strong up front, so you can never have enough capable defensive linemen.”

The Bills fixed their run defense in the second half against Washington, but Adrian Peterson killed them in the first half. McDermott said it will be a never ending battle, “It comes back to two or three things. At the end of the day, it comes down to gap integrity in fundamentals and technique.

“Things just don’t go away in this league. You’ve got to get it right and it’s a week-to-week-deal, and you have to continue to work on them because the minute you think something is fixed, it’s not fixed.”

Steve Wilks served as Arizona’s head coach for just one season. Wilks worked with McDermott in Carolina and is now Cleveland’s defensive coordinator. McDermott remembers Wilks fondly, “He’s a good man and a good football coach. I have a lot of respect for him.

“Just watching Steve’s career, becoming a head coach was great to see. I know it didn’t work out, but it doesn’t take away that he’s a damn good coach.”