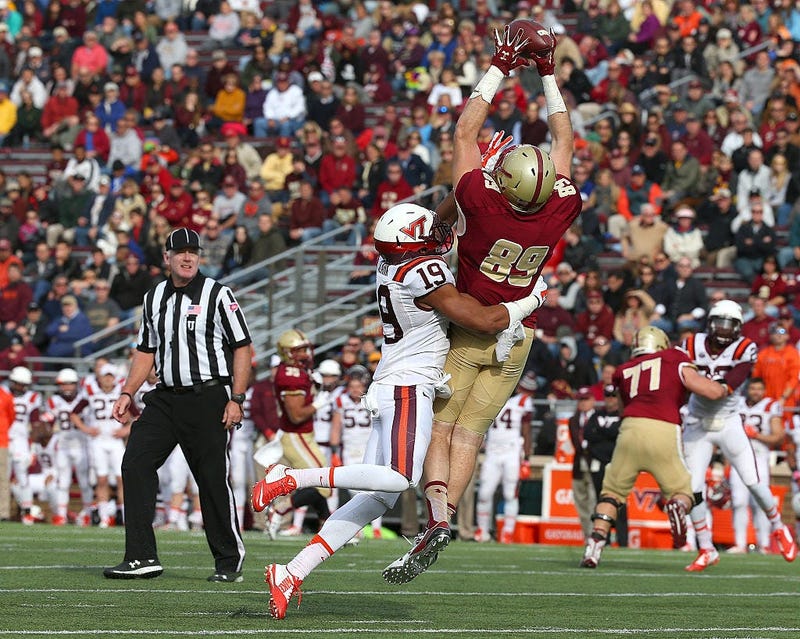 The last of the Buffalo Bills' eight draft picks from the 2019 NFL Draft got a lot of praise this week from two prominent NFL Draft analysts.

In the most recent episode of ESPN’s “First Draft” podcast with Mel Kiper, Todd McShay, and host Chris Sprow, the trio were recapping the draft when the subject of tight ends came up.

Here’s how the exchange went:

Sprow: “Tommy Sweeney, in the 228th pick, goes to the Buffalo Bills.”
Kiper: “Todd loves him.”
Sprow: “But Todd, Mel goes, 'he might have some of the best hands in this entire draft.’ At [pick] 228!”
Kiper: “Josh Allen is a flamethrower. He’s Randy Johnson. That’s who I compared him to in baseball. So, you’ve got to have a guy who is able to adjust and be able to have great hand-eye coordination, and that’s what Tommy Sweeney has. He may lumber a bit, but his hands are as good as anybody’s in this draft.”
McShay: “Short to intermediate he’s going to be there for you. He’s [also] going to block for you.”
Kiper: “He’s a throwback.”
McShay: “He’s one of the highest character, football-loving dude’s in the class.”
Kiper: “Yeah, in the 1970’s and 80’s he probably would have been a second or third round pick.”

The 6’ 5” and 260-pound Sweeney caught 99 passes for 1,281 yards and 10 touchdowns in four years at Boston College. He was the second tight end the Bills chose after also selecting Mississippi’s Dawson Knox with their second pick of the third round. Both players will join the rest of their fellow draft class, as well as undrafted free agents and other first-year players at the team’s rookie minicamp in Orchard Park this weekend.

While some analysts consider Sweeney a blocking tight end at the NFL level, Sweeney says he’s more than that.

“I’m a tight end,” he told the local media in a conference call immediately after being drafted by the Bills. “I’m not a blocking tight end, I’m not a catching tight end. I’m doing both. I’m willing to do whatever’s asked of me and whatever it takes to get the win. I played the last four years at B.C. doing that and a little bit of both. Did a lot of both, really, and just willing to do whatever is asked of me.”

Sweeney wasn’t very highly recruited coming out of football powerhouse Don Bosco Prep in New Jersey in 2014. The lack of interest from colleges fueled him to not only succeed once he got to Boston College, but to be able to get to the next level, too.

“It kind put a chip on my shoulder and kind of drove me,” he said. “But everything happens for a reason, so I’m just happy that it worked out that way. I’m not trying to use that against anybody but kind of using it for me.”

He’ll get his first chance to use that chip for himself, and start to impress Bills’ coaches, later this week.