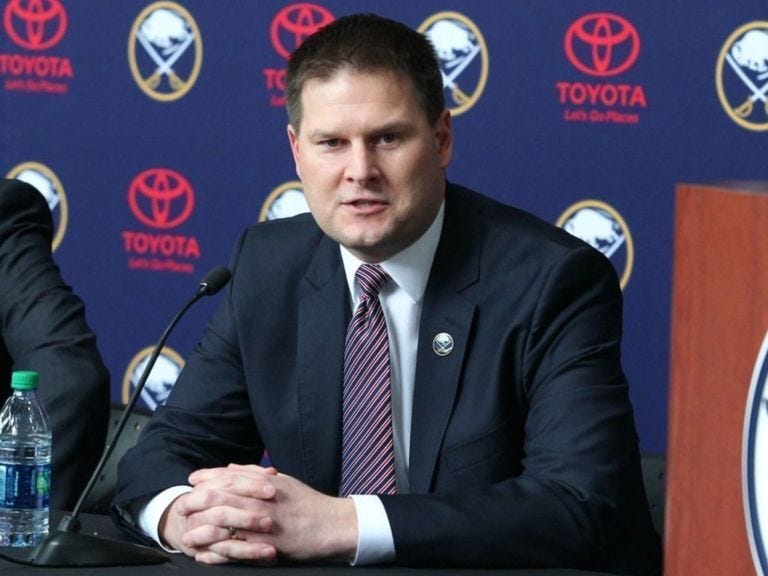 After a 58-84-22 record in two seasons as the head coach of the Buffalo Sabres, head coach Phil Housley was relieved of his duties with the organization by general manager Jason Botterill on Sunday.

In Housley's two seasons in Buffalo, his teams were out-scored by a 546-419 total, and averaged 3.33 goals-against per-game. On the flip side of things, the Sabres just averaged 2.55 goals-for per-game, but never developed any consistency on the ice in two years under Housley's tutelage.

Botterill met with the media on Sunday just hours after the decision to fire Housley.

"I would like to take this opportunity to thank Phil Housley. I really enjoyed working with Phil over the last couple of years. Phil is a great man. He put a tremendous amount of time and effort into helping this organization. I wish him and his family all the best moving forward.

"Today certainly wasn't an easy day, but the results in the second half were just not there. We were very inconsistent. Our fans expect more, and we expect more. In the end, I thought this decision had to be made for our organization to move forward. We are all responsible for the success and failures of the organization. We are certainly not pleased with where we are at, and where our results have put us this year. We all have to be accountable and not make excuses.

"In terms of filling in this vacancy, the process has already begun. At this time, I do not have anything else to add about the possible search for candidates."

Botterill on what went into the decision to fire Housley:

"It's mainly just our results in the second half. I think we had, unfortunately, the same lapses defensively in our structure, especially when you come back after the All-Star break and play in those tight games in those tight situations. Some of those same mistakes were continually showing up. At the end of the day, this is a results driven business, and we didn't get the results."

Botterill on the outlook of the 2018-19 season before opening night:

"We've talked from the start that we were going to be a young team, not just young players, but players in key situations playing very notable situations. It's a drain on them in the second half, playing 82 games. It's something they're not used to. I thought our coaching staff worked very hard with those players trying to continue their development, but I thought some of the mistakes continued to show up with our young players. There's also mistakes there from our veteran players."

Botterill on what went wrong for the team:

Botterill on what happened from the first half of the season to the second half:

"You look at our record in the first 25 games, you look at the record in our last 25 games. Unfortunately, the message wasn't getting through. I thought that both sides, when we first came in two years ago, a big thing we had to try and work on was the communication between the players and the coaching staff. I think our coaching staff really made an effort to, and the young players are certainly interacting with our coaches more, which is nice to see. At the end of the day, it didn't result with success on the ice."

Botterill on where the decision to fire Housley came from:

"[The Pegulas] were not involved with the firing of Phil. I had discussions with them about where I was at in my thought process, I made my recommendation this morning to them, they accepted it, and then I obviously had the tough conversation with Phil."

Botterill on what the coach will be for the Sabres moving forward:

You can listen to the entire press conference below: